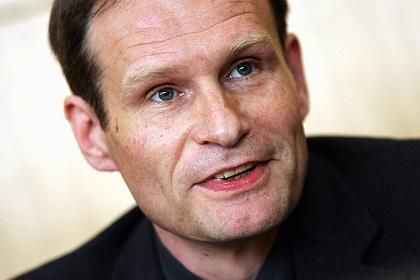 Armin Meiwes, serving a life sentence for killing a man and eating more than 20 kilos of him, insists he is a normal guy.

Armin Meiwes, the German cannibal serving a life sentence for killing and eating a man who begged to be devoured, has described how the meat tasted of pork and how he prepared an elaborate meal of human steak in a green pepper sauce with croquettes and Brussels sprouts.

In his first television interview, broadcast on Monday night on the RTL channel, Meiwes, 46, looked relaxed and healthy as he spoke about his decades-long yearning to consume another man.

The case came to light in December 2002, and the grisly details made world headlines. Meiwes filmed himself killing, disembowelling and cutting up the corpse of computer engineer Bernd Brandes, 42, whom he had met after posting messages in Internet chatrooms seeking "men for slaughter."

"Yes, people who can't think their way into this find it monstrous. But in principle I'm a normal human being," he told his interviewer Günter Stampf, who has written a book, "Interview with a Cannibal," based on 30 meetings with Meiwes in jail. The interviews were approved by the Frankfurt district court that convicted him.

"I sauteed the steak of Bernd, with salt, pepper, garlic and nutmeg. I had it with Princess croquettes, Brussels sprouts and a green pepper sauce," said Meiwes. He said the meat was a little tough. He froze meal-sized portions of Brandes, some in the form of minced meat, and ate more than 20 kilograms of it in the months following the March 2001 killing.

During his two trials in 2004 and 2006, Meiwes said he had always dreamt of having a younger brother -- "someone to be part of me" -- and had become fascinated with cannibalism as a way to fulfil that obsession. His desires were fuelled by the Internet, where he had contact with around 400 men interested in cannibalism.

He found a perfect match in Brandes, who was obsessed with being eaten. "The first bite was of course a peculiar, indefinable feeling at first because I had yearned for that for 30 years, that this inner connection would be made perfect through this flesh," Meiwes said in the interview.

"The flesh tastes like pork, a little bit more bitter, stronger. It tastes quite good," he said.

He said that when he was a child, he had enjoyed his mother reading him the fairy tale "Hansel and Gretel," about a witch who traps two children and prepares to eat the boy. "The bit where Hansel is to be eaten was interesting. You wouldn't believe how many Hansels are whizzing around the Internet."

Police estimate that around 10,000 people in Germany alone share Meiwes' fascination with cannibalism -- either eating human flesh or being eaten.

Meiwes, serving his sentence in a prison in Kassel, central Germany, could be eligible for parole after serving a mandatory 15 years in jail. A psychiatric examination conducted ahead of his trials concluded that he is not insane but has a "severely disturbed soul."

"I want to undergo therapy, I know I need that and I hope it will be done at some point," said Meiwes.