Mehmet Scholl, a former Bayern Munich star and current TV commentator, even once explained why it wouldn't work. Football, he said, is too complex. "Let's assume that you take something to build up your muscles, your coordination would suffer. If you take something for conditioning, you'll get slower." According to Mehmet.

Why, then, do so many football players dope?

In 2015 alone, there were 149 cases of doping worldwide. Now, SPIEGEL has obtained details regarding each of those positive tests from the hacking group Fancy Bears. In a 20-page-long Excel spreadsheet, the World Anti-Doping Agency (WADA) has listed its "Adverse Analytical Findings," samples taken from players that revealed substances on the prohibited list.

Positive tests came from players in Brazil, England, Spain, Italy and France. But there were also cases in countries where the sport is not as established, such as Thailand, Estonia and Malta. The list also includes a case in Germany, from a urine sample taken on May 3, 2015, and analyzed by the Institute of Biochemistry at the German Sport University Cologne. The sample is labeled "GER-FOOT" and is numbered "DFB6145466."

Playing Down the Doping Problem

The sample contained the substance prednisolone, an anti-inflammatory medication that can increase performance levels in the short term, which is why athletes are prohibited from taking it on the day of a game or competition.

The WADA spreadsheet does not include the names of players or the teams they play for. Only the football associations in the respective countries know who the positive tests belong to. And their officials have been doing all they can to play down the doping problem.

Yet there have been a number of scandals over the years. In 2004, for example, the team doctor for Juventus Turin received a prison sentence for injecting players with EPO over the course of several years. Last year, French national team player Mamadou Sakho, who played his club football for FC Liverpool at the time, was discovered to have been using higenamine, a substance which increases the heart rate.

But the sport continues to insist that its athletes get their energy merely from pasta and isotonic sports drinks. Indeed, the two biggest lies in the world of football are that there are no gay players and that nobody uses banned substances.

One can assume that many of the players listed in the WADA spreadsheet are professionals. In most countries, it is primarily athletes in the professional leagues that are tested. Plus, the document indicates who commissioned the tests, including the South American and Asian associations along with the global organization FIFA, which means that many of the doped players were discovered during tests following international matches.

On Sept. 4, 2015, for example, a urine sample was sent to the laboratory in Cologne from a player who had been tested following a UEFA match on the previous day. The scientists noted an "Adverse Analytical Finding." The sample had tested positive for amphetamines.

The day before the lab test, UEFA had held nine qualifying matches for the 2016 European Football Championship tournament. Among the games that day were Netherlands versus Iceland, Belgium versus Bosnia-Herzegovina and Italy against Malta. UEFA didn't say if the sample came from one of those games, but the association did say that the player involved suffered from ADHS and had presented an exemption for a stimulant, which is why he wasn't penalized.

What banned substances, though, do football players tend to take? The answer is: whatever they can get on the pharmaceuticals market.

The WADA spreadsheet includes amphetamines, asthma medications, anti-estrogens, peptide hormones and anabolic steroids. Some players were caught using a substance designed to disguise banned doping agents, while other players were found to have used cannabis or cocaine.

Modern football is "extremely dynamic," says doping expert and biochemist Mario Thevis from the German Sport University Cologne. "Among other things, players need endurance, strength endurance and the ability to recover quickly. In football as well, all of these factors can be influenced with the help of banned substances."

Stimulants, taken just before a game, for example, increase an athlete's aggression. Steroids make muscles bigger and stronger and help injured professionals return more quickly to the playing field. In the world of professional sports, substances that act like steroids, but which are difficult to detect, have recently become popular. Called SARMs, they are seen as the next generation of doping -- and they too have found their way into football. In December 2015, four players were caught using SARMs in Guatemala.

According to FIFA, some 30,000 tests are carried out on players each year. The organization insists that no other sport is monitored for doping as closely and claims that only 0.24 percent of the samples taken in 2015 came back positive. In just 78 cases, FIFA says, were players found to have taken banned substances.

Just 78? WADA counts 149, almost twice as many. So who miscounted? It likely wasn't WADA. It seems more probable that players who tested positive weren't banned in accordance with the rules.

The WADA document indicates that five players tested positive for performance-enhancing drugs in UEFA competitions. One professional player was found to have taken dexamethasone, a cortisone preparation that is banned in competition because it increases concentration and speeds recovery. But there were no consequences meted out to the player.

When contacted, UEFA said that the player "bore no fault" because the substance was from an injection "earlier in the season." Case closed.

In Mexico, a number of players tested positive in 2015, a total of 33 cases. All of the football players were found to have taken clenbuterol, a substance that builds up muscle mass and is primarily used by bodybuilders.

What is going on in Mexico? The country's football association declined to respond to requests for comment. But there was a similar instance in 2011, when five Mexican players tested positive for clenbuterol. None of the players were disciplined and the Mexican Football Federation claimed that clenbuterol is included in cattle feed and that the players must have eaten meat contaminated with the substance. The athletes, the federation claimed, were innocent.

The English Football Association likewise seems to have a distinctive perspective on what constitutes doping and what does not. In 2015, nine players in England tested positive for doping. Two had taken the asthma medication salbutamol, one took amphetamines, another ecstasy. In one case, the banned substance isn't listed and in four cases, players had used cocaine.

According to the FA, three players received doping warnings in 2015, but none were penalized. The FA didn't comment on the other six cases found by WADA.

In English football, however, cocaine and hashish are considered "social drugs." If professionals didn't use the drug on match days, they don't necessarily have anything to fear. One of the players discovered to have used cocaine in 2015, for example, wasn't punished because his use of the drug following a death in the family was seen as a mitigating factor.

Top players in the English Premier League have tough schedules. They play for their club in the national league, in two cup competitions and in the Champions League -- with some players also playing for their national squads. Stars in the Bundesliga, Germany's professional league, also play between 60 and 70 matches per season.

In contrast to track-and-field athletes or swimmers, professional football players also need to prove themselves against their teammates in practice to even get playing time on the weekend. Is all of that even possible without chemical assistance?

The Bundesliga hasn't seen a doping case in recent years. But intensive testing hasn't been in place for very long either. Until two years ago, players were controlled following matches by the German Football Association (DFB) itself. It is only since the beginning of the 2015 season that all tests after games and during practices have been carried out by NADA, the national anti-doping agency.

Broadly speaking, it isn't easy for Bundesliga players to take performance-enhancing drugs. The sport is under constant scrutiny from fans and media and teams see rapid player turnover. Top athletes in Germany must be available for possible tests at any time and are required to report every change in location and every training camp to NADA and even have to ensure that the anti-doping agency knows where they are during their free time.

NADA investigators seek to test football players as often as possible, even away from the stadium or practice facility. In fall 2014, for example, inspectors wanted to visit Thiago Alcantara for an unannounced doping test. The Spaniard from FC Bayern was injured at the time and the club told NADA that he was in a clinic in Barcelona. When the investigators showed up, however, Alcantara wasn't there and the NADA agents left empty-handed.

One Bundesliga player, though, told SPIEGEL that he once knew 48 hours in advance that a doping investigator would be coming by to test him. NADA declined to comment on the case, because of "a lack of knowledge of the details."

There are several indications as to whether a particular sport is serious about combatting doping -- or not. Blood tests, for example, are essential because some performance enhancers, like human growth hormone and some EPO preparations, can only be detected in the blood.

WADA recommends that all associations test blood in 10 percent of cases and the German Football Association is now doing this. But the DFB is the exception. Even FIFA only managed a 3.8 percent result for its 2015 competitions. All of the positive tests listed in the WADA spreadsheet were based on urine samples, which leads one to suspect that it doesn't tell the whole story about doping in football.

The German case in the WADA list also ended without consequences. When contacted for comment, the DFB said the case against the player from RW Oberhausen had been closed following an oral hearing. The legal examination, they said, had revealed that "no banned treatment method had taken place." 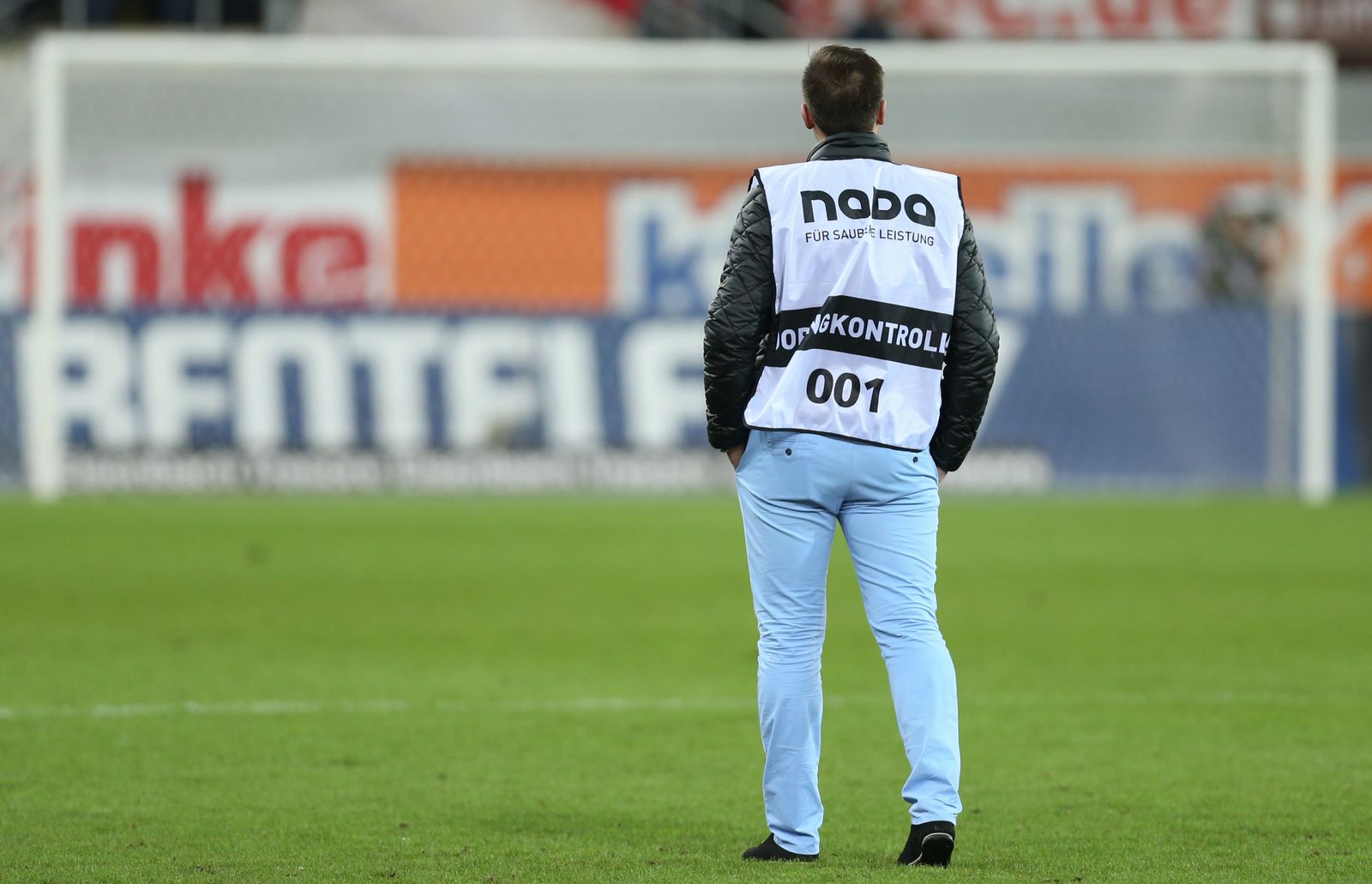