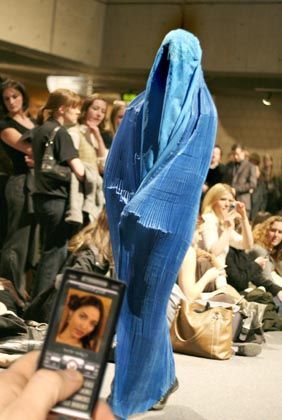 Women who would rather not wear a burqa can now slip around it electronically.

A burqa may not be the flirtiest garment ever invented for women. The highly modest head-to-toe robe even shrouds the eyes, so for centuries it's been difficult for women wearing them to send suggestive signals to men.

But now a German designer has debuted a digitally-enabled burqa that can broadcast a photo of the wearer to nearby mobile phones. Markus Kison calls it the "CharmingBurka," and says it isn't forbidden by Islamic law.

A model demonstrated a prototype of Kison's garment at the Seamless 2008 design and fashion show in Boston, a high-tech fashion event run with support from the Masschusetts Institute of Technology.

Kison says the burqa has a "digital layer" that incorporates a Bluetooth antenna, which lets women "decide for themselves where they want to position themselves virtually." Nearby mobile phones that also use Bluetooth will light up with any small file a woman chooses to broadcast as her identity -- a photo, a cartoon, a text file or even a sound clip.

Kison's broadcast technology started as a marketing tool; the so-called "Bluebot" system is meant to send digital advertisements to passing phones. But Kison's new design turns a burqa into a walking MySpace page.

A broadcasting burqa may not be explicitly forbidden by Islamic law -- since most interpreters of Shariah have never imagined such a thing -- but certain Islamic governments have tried to clamp down on electronic flirting. By 2002 it was so common for teenagers in Saudi Arabia to send each other pictures of themselves by phone that an import ban was imposed on camera phones. But demand was so high that the law was lifted two years later.