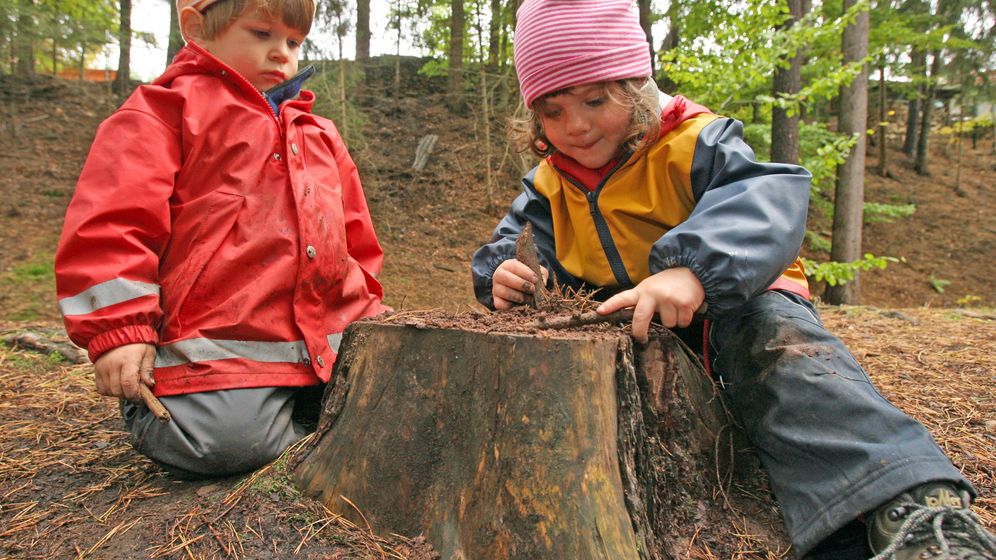 Photo Gallery: A Day at a Waldkindergarten

Every morning, whatever the weather, 21 children arrive at Die Kleinen Pankgrafen, in Karow, a town just north of Berlin, one of more than 1,500 Waldkindergartens across Germany. The movement is also spreading overseas with forest kindergartens in most continental European countries, big demand in Japan, South Korea and fledgling interest in the United States, Canada and the United Kingdom.

The thermometer is only just edging above freezing on this particular morning and biting easterly winds are making it feel more than a few degrees below zero. But Thorsten Reinecke, the head of Die Kleinen Pankgrafen, laughs at the reporter's concerns about the children's welfare. "This is nothing," he says. "'Whatever the weather' is not just a saying -- we stay out until it gets to -28 degrees Celsius (-18.4 degrees Fahrenheit). The children never get cold. They, and their parents, know how to dress. They're like little onions -- they're wrapped up in layers and layers of clothes."

If it does get exceptionally cold, the children (and teacher) can seek respite in the camp teepee (which also has a campfire) or a small wooden classroom -- but Reinecke insists the vast majority of time is spent outdoors, even in three feet of snow.

Last winter, it snowed so much the children built themselves an igloo. It hasn't snowed yet this year so the igloo construction will have to wait, and on this day the fire is the main focus of the children's attention. But it's not, necessarily, that of the camp's four teachers. At times, the children are left unattended and when the fire dampens down slightly, four-year-old Finn adds fresh logs to the fire. Other children poke the fire with twigs.

If the teachers notice, they aren't showing any concern. "Maybe I don't have that much control and I can't always see them, but I know where they are," Reinecke says. "Not being there all the time allows them to assess risks better. The idea is for children to learn by themselves, learn from each other and learn from their experiences and their mistakes," he explains. This philosophy extends to the fire.

Another teacher, Nihal Öz, recalls a time when a boy stood in the fire "to see what would happen." "He came over and said 'look my feet didn't burn'," she says. "So we sat everyone down and told them about fire and showed them what happens if things stay in the fire." Discussions like that are as close as the Waldkindergarten gets to a lesson. There's little by way of structured activities beyond snack time at around 11 a.m. when the teachers bring out freshly cut fruit eaten directly from the bowl with the children's hands caked in mud from a morning of catching snails and building tree houses.

After snack time some of the children wonder off to visit the camp's donkeys while others go climbing. There are no monkey bars at the kindergarten because, as Reinecke says, "every tree is there for climbing." The children are allowed to climb whenever they want, and go as high as they want. The only rule is that teachers can only help children get down, not up.

"It makes them much more cautious and careful because they have to trust themselves," Öz says. "The only times children have fallen out of a tree is when their parents are here and they think 'daddy will be there to save me'."

Ute Schulte-Ostermann, president of the German Federation of Nature and Forest Kindergartens (BVNW), says there have been no serious injuries beyond the occasional broken leg in the organization's 20-year history. "There are far fewer accidents than at regular indoor kindergartens because we have fewer walls and softer floors -- leaves and mud," she says.

Schulte-Ostermann, who is also a teacher trainer at Kiel's University of Applied Sciences, says life outdoors toughens the children up, reducing incidents of colds and flus. Head lice outbreaks are also significantly reduced because the children are not confined in an enclosed space. There is however, a much greater risk of contracting Lyme disease from tick bites.

A Journal of Investigative Dermatology research paper in 2006 found that Waldkindergarten children are 2.8 times more likely to get bitten by ticks and are more than 4 times as likely to suffer from Lyme disease than children at indoor kindergartens.

Schulte-Ostermann says the risks are outweighed by the "massive" mental and physical benefits of playing outside. "Children who have attended a Waldkindergarten have a much deeper understanding of the world around them, and evidence shows they are often much more confident and outgoing when they reach school."

She says Waldkindergartens may have started with hippies and academics -- indeed, the movement originated in Denmark in the 1950s, with the first kindergarten in Germany opening during the 1960s -- but parents now come from all sorts of different backgrounds. They include everyone from shop workers to doctors, nurses and, in one instance, even the offspring of a German punk band. "We have more enquiries than we can deal with, and there are not enough places even though more are opening up all the time."

With the German movement progressing at a rapid pace, Schulte-Ostermann has set her sights on the rest of the world by holding the inaugural International Waldkindergärten Congress in Berlin this week for more than 350 delegates to discuss ways to spread the philosophy to even more countries, particularly in the US and the UK which have so far been the most hesitant to embrace outdoor kindergartens.

The first US Waldkindergarten, the Mother Earth School, opened in Portland, Oregon, in 2007. There are just a handful in the UK, including the Secret Garden Outdoor Nursery in Fife, Scotland, which runs for 49 weeks of the year and has 40 children enrolled.

Schulte-Ostermann says she thinks the US and the UK's obsession with health and safety and regulations may have slowed adoption of the idea, but points out that forest kindergartens have proved very popular in Japan, which is also known for its red tape bureaucracy.

"Our biggest achievement was to set it (Waldkindergartens) up in Japan, where education is so regulated," she says in the staff room of the inner city Berlin school used for the conference. "We have helped them take it out of the authorities' hands and give education back to the people."

An Escape from Strict Rules

Hiroe Kido, a Japanese student writing her postdoctoral thesis on the forest kindergarten movement, says there are more than 100 Japanese Waldkindergartens following the German model -- a number that is expected to double by next year. "They are very, very popular in Japan because they are an escape from the strict rules in Japanese society," she says. "Some parents are worried that Japan is becoming too stressed and high tech and there is not time to communicate with nature, so they really like waldkindergartens."

Japanese demand for places spiked even higher following the 2011 Fukushima nuclear power plant disaster. "Fukushima made the Japanese think again about our lives, and realize that we need to get back to nature more," she says. "Life is very extreme sometimes in Japan."

Schulte-Ostermann, who has just returned from a tour of Japan and South Korea, says that if Japanese people can realize the need for nature in children's lives then she might be one step nearer to her rather ambitious goal of turning all of the world's indoor kindergartens into waldkindergartens.