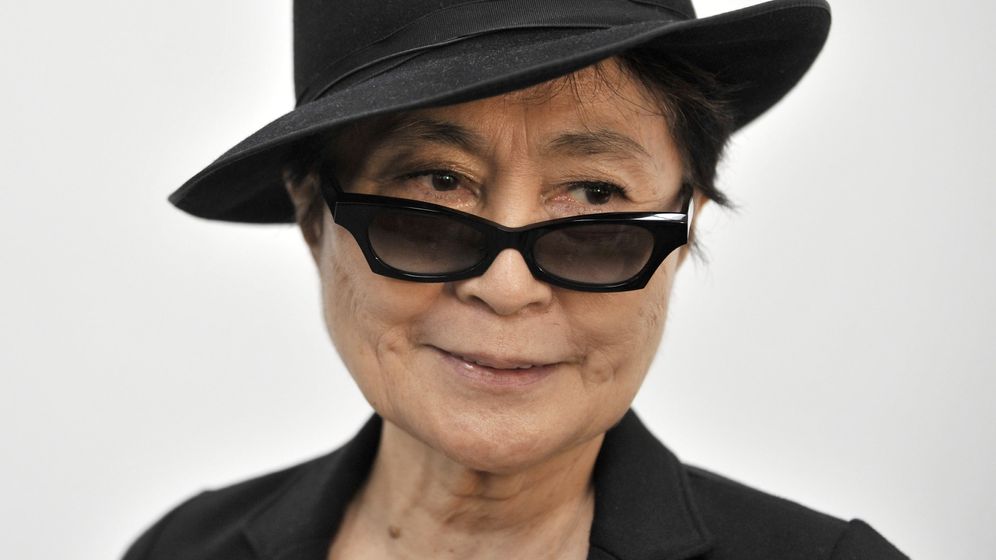 Photo Gallery: An Outsider on a Global Scale

She is dressed in all black, with a small hat and big sunglasses, sitting on old upholstered furniture in a Berlin hotel. She almost looks like someone only playing the role of Yoko Ono, one of the world's most famous women.

But this is Ono herself. Looking at her, it's hard not to see John Lennon as well, though he died over 30 years ago. For many people, Ono is the eternal widow and a hated figure -- which is basically how she was treated even when Lennon was alive.

Dismissing Ono in this way is easy, but wrong, as she is an icon of 1960s avant-garde art in her own right. Ono turns 80 this February and Kunsthalle Schirn, a public art space in the western German city of Frankfurt, is putting on a retrospective of her work starting on February 15. Ono is enjoying the attention and the furore the exhibition has generated, but especially the recognition it signals. At last, the general public will recognize her important place in the history of art.

In conversation, Ono is strikingly pleasant and open, almost youthful. Her laugh sounds more like a giggle, although the life she describes is one that was often no laughing matter. Ono likes interviews, but she sticks close to the allotted time. Then her gaze settles on her teacup, an assistant hurries over and the interviewer seems to become invisible.

This Yoko Ono behaves like a pop star, which makes it difficult to imagine the other Yoko Ono, the nonconformist artist who has never shied away from taking risks.

Ono has been doing things people don't like since long before she met Lennon, in November 1966. She has gone onstage and asked the audience to cut up her dress. She has climbed into a bag together with her then-husband, leaving viewers puzzling over what exactly was going on and what it was supposed to mean. Then there were her "instruction paintings," which asked the viewer to spend a week coughing or listening to the sound of the Earth's rotation. Ono has designated as "art" many things that most people would consider crazy, at best.

It has always been that way, Ono says. She has always done things that other people have only thought about. "That's the difference," she says. "It's so funny."

Blazing Her Own Trail

But there was a life before Ono's avant-garde art. Her childhood was spent in Japan as the daughter of extremely wealthy parents. She attended the same Tokyo school as the emperor's sons, one of whom dedicated poems to her. But she also learned what it was to go hungry and beg, when her mother fled with her and her siblings to the countryside after the American bombing raids during World War II. Ono's experiences during that time informed her 1966 performance "Shadow Piece," in which the participants' shadows were meant to recall the dead of Hiroshima and Nagasaki.

Ono's childhood home was intact but cold. Her parents were cultured and had a great love of music, but they were never there for their daughter. "I must say, I was often put in a position of loneliness," Ono says, adding that what allowed her to survive her childhood and adolescence was her imagination as well as an ability, learned during the war, to "do what has to be done." Her life became an experiment, one she herself designed.

Ono was the first woman allowed to study philosophy at a Japanese university. She then went to New York, where she enrolled in writing and composition courses. She never made it as far as graduation in either Japan or New York, but instead simply transformed herself into an artist. Still, Ono wasn't a painter or a sculptor -- her materials were films, words, objects, even herself. She deconstructed what was understood as "art," and everything she did was anything but mainstream.

For example, she filmed a fly wandering across a woman's body, while another film simply showed a burning match to symbolize the passage of time. She made paintings by laying out canvases and letting gallery visitors walk on them. She advertised an exhibition at MoMA that didn't actually exist. All of it was provocative, often making fun of classical art forms and the business side of art. In a 1966 project, Ono filmed a number of people's naked derrieres, leaving doubts about whether she has a sense of humor behind.

Waiting for the World to Catch Up

It was her timing, perhaps, that was always a bit off. Ono was often too far ahead of the times, always seeking out the new and "the feeling of being alive." Ono says she experienced rejection constantly, but adds that getting approval might have destroyed her as an artist.

People started talking about her, and soon the major players in the modern art scene were visiting Ono's New York loft for her concerts and performances. Marcel Duchamp and Max Ernst, for example, were among her guests. Ono also met John Cage through her first husband, who was also a composer. For many people, Cage was the god of a new form of music. For Ono, he was a god because he broke with convention so self-confidently. Cage supported Ono's work, and Ono's performance "Sky Piece to Jesus Christ," in which musicians were wrapped in bandages until they were no longer able to play their instruments, was created both in honor of Cage and as an ironic commentary on that reverence.

All this was Ono's world, yet she never completely belonged in it. As a woman, and especially as an Asian woman, life in the art world wasn't easy. And, on top of that, Ono was a conceptual artist, someone associated with strange buzzwords and odd art movements, such as Fluxus. Her parents and her first two husbands struggled with Ono's need for freedom. Her first child was raised by Ono's ex-husband, who fought a bizarre battle with Ono over their daughter that included both an attempted and a real kidnapping. Yet even this seemed to somehow fit with the strange days of the 1960s and '70s.

Ono met John Lennon in 1966 when he came to a preview of one of her exhibitions. After they became a couple, they staged high-profile events, such as their "bed-ins," in which they allowed photographers to shoot them sitting in bed to raise awareness for peace. But, more than anything, they celebrated the fact of being a couple. Ono grew famous, but only for being a wife and an eccentric. She remained an outsider-- only now on a global scale -- as people feared and pitied him.

A few days after Lennon was shot in December 1980, Ono called for 10 minutes of silence in his memory. She was already accustomed to giving the world instructions and, these days, she continues to do as she pleases. She allows serious art institutions, such as London's Serpentine Gallery, to celebrate her and at the same time accepts unusual honors, such as an award from the Checkpoint Charlie Museum, in Berlin. She has erected a tower made of light columns and campaigned for world peace on enormous billboards.

Her colorful art fits in well with today's mainstream aesthetics. Indeed, it seems like the world has finally made peace with Yoko Ono.

The retrospective "Yoko Ono. Half-a-Wind Show" will run from Feb. 15 to May 12, 2013 at Frankfurt's Schirn Kunsthalle.

8 Bilder Photo Gallery: An Outsider on a Global Scale 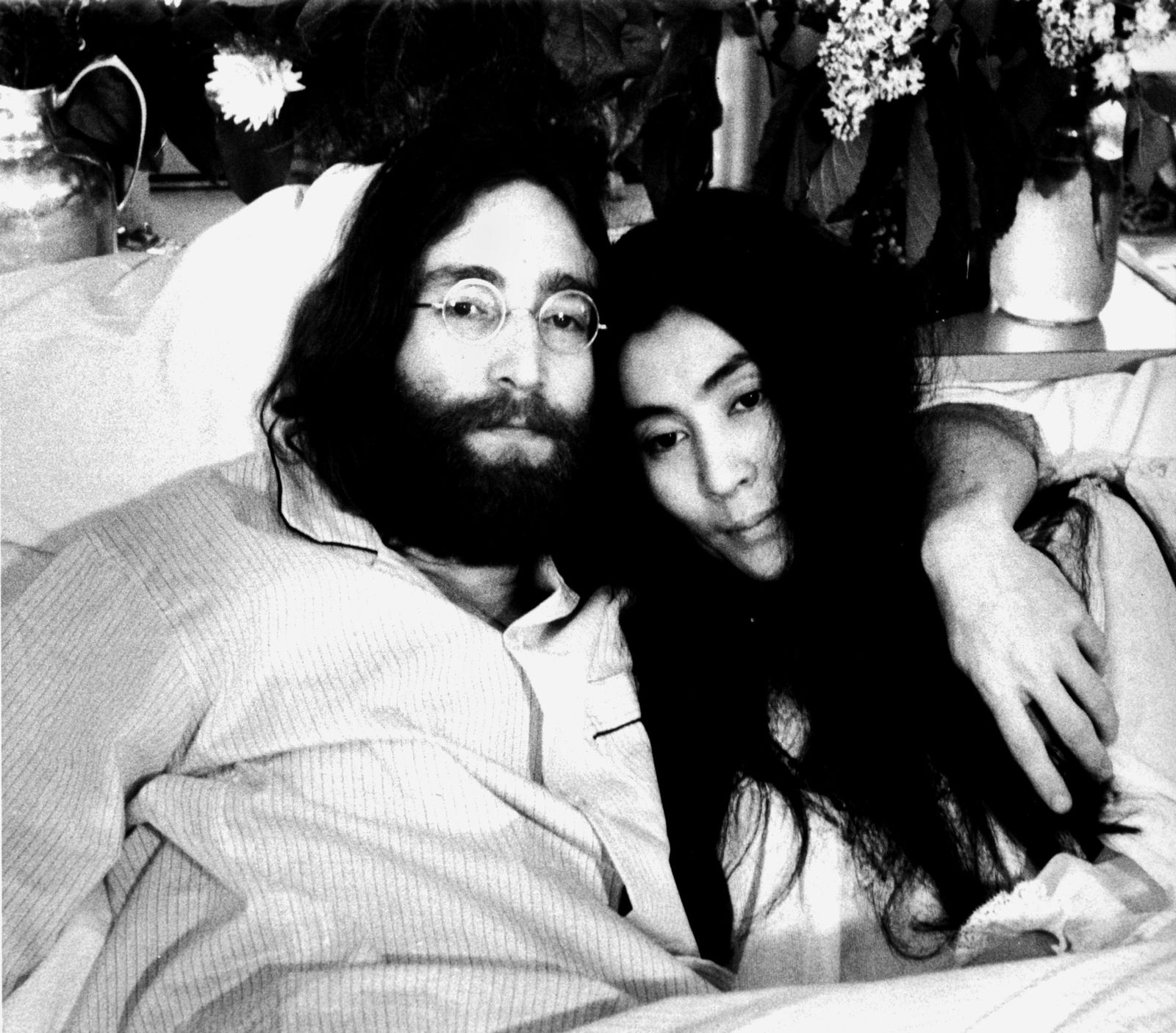 After they became a couple, they staged high-profile events, such as their "bed-ins," in which they allowed photographers to shoot them sitting in bed to raise awareness for peace.