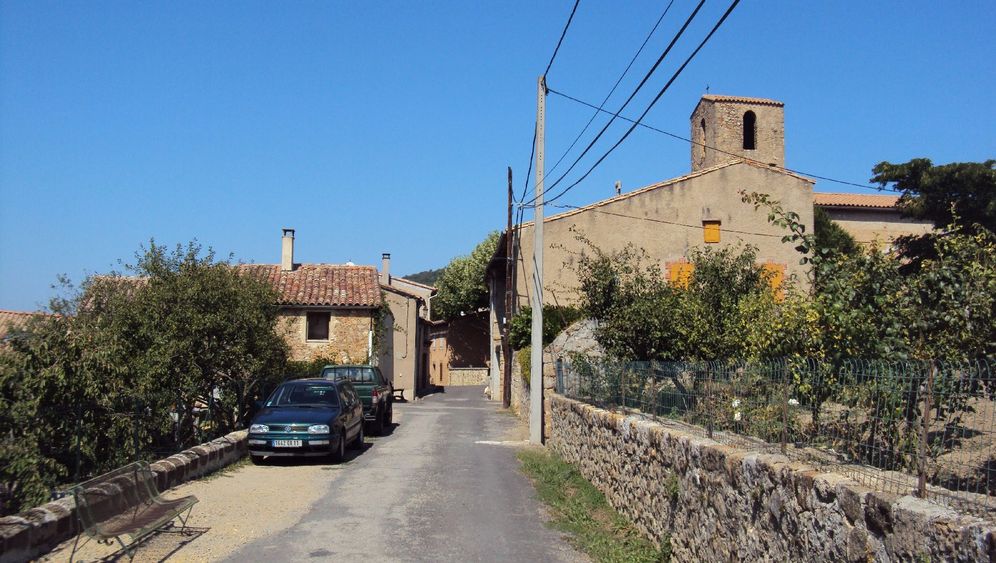 Photo Gallery: Aliens and the Apocalypse

Anyone who wants to see the birthplace of a new civilization has to travel to what seems like the end of the world. At the foot of the French Pyrenees, among twiggy bushes and dusty rocks, lies Bugarach. Just getting there alone is torture. A traveller must endure narrow, winding roads, offering little protection from the ravines below. All of a sudden, 20 kilometers (12.4 miles) from the destination, the pop song "Blow My Whistle" disappears from the radio and is replaced by a quiz show for housewives. The station is called "Nostalgia."

There are many reasons why the village, population 200, is a popular travel destination these days. Some come to go hiking, others to relax. And some come for a reason that lies completely beyond the earthly sphere. This year on December 21 the ancient Mayan calendar ends, and so end-of-the-world hysterics are once again obsessed with the idea of making it to the other side of the apocalypse.

They believe that Bugarach is special because, according to the calculations, the village is supposed to be saved from the hellfire -- at least that's the story in Internet forums on the topic, which have selected the spot as a modern-day Noah's Ark.

The village has its local 1,230 meter-high mountain, Pic de Bugarach, to thank for the attention. In the mountain, according to the conspiracy theorists, are slumbering extra-terrestrials, who will come to life on December 21. For them, Bugarach is actually a garage for UFOs, because they believe alien spaceships are parked in caves in the mountain. The aliens will rescue the chosen few -- that is, anyone in the town -- from the apocalypse. To prove their theories, hikers film their supposed encounters with the extra-terrestrials and post them on the Internet.

So will the pilgrims of the apocalypse descend on the town in droves? At least the town's mayor, Jean-Pierre Delord, is afraid they will. For two years the Socialist politician has warned about the forces threatening his hometown: invasion by New Agers, sect meetings and collective suicide. But the first thing anyone notices upon entering Bugarach on a normal weekday is how empty it is.

It remains to be seen if Bugarach will be able to hold off not only the end of the world but also the onslaught of visitors. "I, for one, haven't seen any gurus," says Jeremy Webb, a British tourist who for four years has come regularly to Bugarach to go mountain biking. But the 56-year-old won't say there aren't any. "There could still be some annoyances this year. I've heard that outside the village there are already lots of crazies setting up camp."

Mayor Delord is more certain. "People who believe in the end of the world regularly write to me," he says. The 69-year-old, who's been in office for 39 years, is a pleasant man with gray hair, dressed in jeans and a T-shirt. But when talk turns to December 21, he doesn't think there's anything to laugh about. "I don't want to tell anyone how to live," he says. "But when hundreds of people storm our village, we won't be able to guarantee public safety anymore."

Because apocalypse types have bought up all the land in the area in the last years, real estate prices in the area have already risen substantially, he says. Recently, he witnessed a type of procession happening in the forest. "They were all dressed in white," he says. "I hope that they don't all take their lives together at some point."

The French agency, the Interministerial Mission for Monitoring and Combatting Cultic Deviances (Miviludes) is just as alarmed. "Until now, more than anything else, the topic has been exploited for commercial reasons," officials at the agency wrote in their 2010 annual report. The report was referring to postcards, magic wands and "eternity stones," which can all be ordered especially for the apocalypse.

Still, the report said that the risks cannot be underestimated, especially in light of the collective suicide of the Sun Temple sect in the 1990s, in which 74 people died. The authorities say that they currently do not have any new insights into what might happen in Bugarach. "But we're observing the development very closely," says Miviludes spokesperson Claire Barbereau.

Meanwhile, the phenomenon at play in the French village is nothing new. "As far as end-of-the-world scenarios are concerned, there's a centuries-old supply closet full of recurring themes," says Eberhard Bauer from the Freiburg Institute for Frontier Areas of Psychology and Mental Health (IGPP). Bauer and his colleagues counsel, among others, people who are afraid of the end of the world. A "spiritual refuge, in which only the chosen few are able to escape," such as Bugarach, is one of the common themes, he says. "It shouldn't come as a surprise to anyone that some people are taken advantage with these ideas of redemption."

On the other hand, the owner of an organic food store in Bugarach, who did not want to be named, says: "It's all nonsense." He says all the hype in reality is just the mayor's clever scheme. "We aren't a brunch of lunatics, who run around stoned the whole day," he says.

The assortment of goods for sale in his store include sandwiches made from organic ingredients, but also books like "Le Calendrier de 13 Lunes" (The Calendar of the 13 Moons) or "Bugarach, Vortex de la Terre" (Bugarach, Vortex of the Earth). "Yes, this place is special," the resident says, "but that's why it's been a long time since anyone here believed the world was going to end."

The real conspiracy, says the shop owner, is one of a political nature. "If you ask the mayor, there are supposed to be new hotels and wind turbines here soon," he says. "To attract tourists, he continues to bring us into the media, so they keep reheating the story when the rumors go cold." He says all the hype begins with the mayor, who immediately calls anyone opposed to his building plans crazy. "That's how politics works in the provinces," he says.

So is it all just a clever PR-play, a cunning political chess move? Of course, Jean-Pierre Delord doesn't see it that way, but the mayor frankly admits that he wants to use the media attention to spur tourism. "I guarantee there will be an invasion on December 21 -- by the press," he says.

There is indeed not much happening in the village yet. For that reason, signs hang on many houses with the words: "À vendre" -- for sale. Even the only business in town is closed in the early afternoon because of a lack of customers.

But at the edge of town there is indeed someone who doesn't seem altogether of this world. With healing herbs hanging out of his shirt pocket, and gray hair standing erect, he's playing the recorder. "This place is going to be the most important place in the world this year," the man says, waving to everyone who passes by.

He came from Spain, he says, to feel the powerful energy vortex from the Pic de Bugarach. But it's hard to find out much more than that from him, because he says, "interviews with journalists disturb the vibes."