Knut, Berlin Zoo's polar bear cub, is unquestionably a superstar. Germany's newspapers have been reporting on the bear since he was born in December, and he made headlines around the world last week amid a controversy over animal rights activists calling for him to be put down.

Hundreds of journalists from all over the world came to see the little bear make his first appearance in public last Friday, and 58 percent of Germans are following his progress as he grows up, according to a new survey conducted for the German television station N24. It's safe to say he's one of the most famous living Germans.

And, like many superstars, he is rapidly becoming a brand. But, unlike say J-Lo or Madonna, the three-month-old bear is not in control of how his image is being marketed. Is the tiny star being exploited for commercial and political gain?

Few would bear a grudge with Berlin Zoo making a bit of money out of the cub. The zoo is expecting record visitor numbers this year with 300,000 extra animal-lovers expected due to the new-found publicity -- 30,000 people came to see Knut this weekend alone.. Fair return, perhaps, for raising the polar bear by hand after his mother rejected him.

But what about Greenpeace using Knut as a poster cub for its campaign on global warming? The environmental lobby group demonstrated outside the Ministry of Economics and Technology in Berlin Tuesday, protesting about plans to build new power stations powered by brown coal, which produce high levels of CO2. Their banner, which referred to the plight of polar bears whose habitat is endangered by global warming, featured an image of a pensive-looking Knut standing in a pool of water, next to the slogan "Coal Kills Knut's Chums."

The German government has likewise begun using Knut for political gain. Environment Minister Sigmar Gabriel accompanied Knut for a photo shoot on the bear's public debut, and has said he will use Knut as a mascot for a United Nations conference on bio-diversity to be held in Bonn in May 2008 -- even though Knut will not be quite so small and cuddly by then. 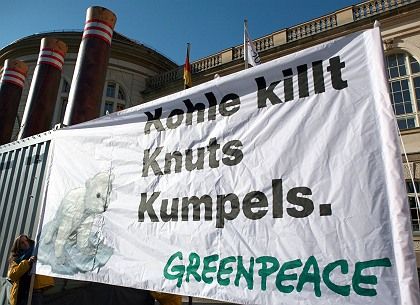 Knut is rapidly becoming ubiquitous. Appropriately for Germany's current biggest star, he will appear as the cover bear on the next issue of the German edition of the glamor magazine Vanity Fair, which recently launched in Germany. The magazine, which hits the newsstands Thursday, will feature a 16-page cover story called "I, Knut -- A World Star From Germany" with many photos of the little bear.

Thuringia-based toy manufacturer Schildkröt is also planning to bring out a Knut soft toy. Production will start in two weeks, the company's managing director Stephan Biemann said Tuesday, with 500 stuffed animals, each 40 centimeters long, being produced -- with €5 of the €59 purchase price going to WWF.

Even the bank Berliner Volksbank has brought out a new debit card featuring a Knut motif. Card-holders will get a discount on tickets at the zoo -- if they can stomach the queues.

Ironically, the Berlin Zoo itself was tardy to cash in on Knut's potential. The 2,400 Knut soft toys which went on sale Friday were already sold out by Monday, and the first Knut postcards didn't go on sale until Tuesday. The souvenirs weren't ready in time because the zoo was expecting Knut to go on show a week later than he did, the zoo's sales director Gerald Uhlich admitted Wednesday to the newspaper Berliner Zeitung.

And, like other superstars, Knut may soon find himself feeling nostalgic for the old days when he was out of the public eye -- it looks like the little bear will be made to work harder for his upkeep in the future. Because of the huge interest in the small star, he may soon have to appear in public for longer than the current two hours a day, Berlin Zoo director Bernhard Blaszkiewitz told the Berliner Zeitung.