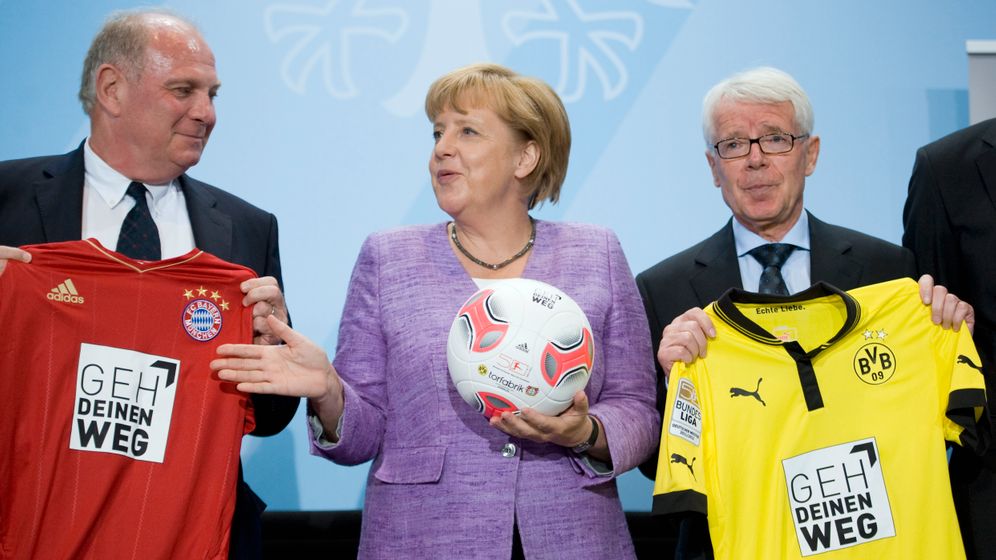 Photo Gallery: The Strain of Being Gay in the Bundesliga

In a 2008 interview with public broadcaster ZDF, Mario Basler, the Bundesliga's leading scorer in 1995 and more recently a trainer in the lower leagues, notoriously said that he didn't believe there were any gay football players in Germany's top league. Even if few would believe him, there was no evidence to the contrary besides sheer statistics.

For the first time last week, a current member a Bundesliga team, under the cloak of anonymity, came forward in an interview about being gay and closeted as a football player in Germany's top league. The interview, conducted by Adrian Bechtold, a 25-year-old journalist, appeared on Tuesday in the online edition of Fluter, a youth magazine published by the respected Federal Agency for Civic Education (BPB).

"I pay a high price for living my dream of playing in the Bundesliga," the athlete said. "I have to put on a show and deny my true identity every day." Bechtold worked for almost a year to get the athlete's story, gaining his trust and promising "a hundred times" that his name wouldn't be revealed.

The interview paints an unsurprisingly grim picture of life in the closet as a professional soccer player in Germany. Does the player know of other gay players in the league? Yes, several. Does he pay women to appear with him in public? No, he has plenty of female friends who will make appearances with him. Do gay Bundesliga players have secret meetings? No.

Is he in a relationship? No, and none of the other gay players in the Bundesliga that he knows are either. "I was once in a relationship in fact. But you can imagine that months of playing this hiding game is pure poison for a couple," he said. "At some point I had to make a decision. Of course, success playing football was subsequently great. But there was a corollary price to pay."

Merkel Says Gays Shouldn't Be Afraid to Come Out

At a press conference to open the Bundesliga Integration Game Days last week, Chancellor Angela Merkel spoke out on the issue, saying athletes should not be afraid to come out in Germany. "I'm of the opinion that every person who summons the strength and has the courage -- in politics we have a long process behind us -- should know that they live in a country where they don't actually have to be afraid," said Merkel. "That's my political message."

The chancellor was joined at the opening conference in Berlin by Uli Hoeness, the president of Bundesliga club FC Bayern Munich, who said that all clubs in the league have been advised to handle the event of players coming out and are well prepared to offer them support. If a Bayern Munich player came out, Hoeness said, "it would be no problem, as far as I'm concerned."

In professional matches over the weekend, all 18 Bundesliga teams wore jerseys with the slogan "Go Your Own Way" ("Geh Deinen Weg") instead of advertisements. The jerseys were part of an effort from the Deutschlandstiftung Integration, a foundation that promotes the integration of minorities, in collaboration with the the league to encourage religious and racial tolerance.

The only former players to come out have been from the lower leagues and only after their careers have ended. Marcus Urban, who played for Rot-Weiss Erfurt when it was in the second division in the 1990s, came out after stepping away from his career on the field. Urban has since spoken in interviews about reading psychology books and paying careful attention to his body movements on the field -- in many cases, playing especially aggressively -- to hide his homosexuality.

Urban, who today works as a life coach and helped Bechtold leading up to the interview and with the press requests he's received since it was published, said the anonymous interview was a step towards the normalization of homosexuality in professional football. "It's a preparation for real outings," he said in an interview with SPIEGEL ONLINE. "We have to prepare for it. The football associations, the clubs, we all have to prepare for real outings. That will come." In the meantime, Urban feels that the German Football Association (DFB) still isn't taking the issue seriously. He would like to see the league appoint someone to deal with the topic specifically.

Creating a more open atmosphere for gays in professional soccer would also make teams more competitive, some argue. Tatjana Eggeling, a former professor of cultural anthropology who advises gay professional athletes, including members of the Bundesliga, argues that hiding their sexuality is an enormous distraction for gay players and keeps them from performing to the best of their abilities.

For the same reasons, closeted athletes are also more likely to be injured during games and in practice.

"The football league itself could do better -- much, much better," Eggeling said in an interview with SPIEGEL ONLINE. "They are rich, they make money out of football, and they could make even more money if they were able to accept gay players in the same way that they do black, Turkish or straight players -- the players would play better, because they wouldn't have to hide their sexual orientation."

Mario Gomez, a striker for Bayern Munich and for the German national team, has also said as much. If gay football players came out, it would free up their playing style, he said. "Being gay hasn't been a taboo for a long time now. We have a gay deputy chancellor, the mayor of Berlin is gay, so gay football players should also let their preferences be known," he said in an interview with the celebrity magazine Bunte in 2010, citing his club FC Bayern Munich's motto, "Mir-san-Mir," which is Bavarian dialect for "we are who we are."

Before Hoeness' remarks on Thursday, former German Bundesliga president Dr. Theo Zwanziger, who left his post in March, underscored on several occasions the league's support of gay athletes and promised support if any athletes wanted to come out. The vast majority of players, coaches and other officials connected with the league, however, remain largely silent on the issue. Speaking out in favor of gay tolerance, the thinking goes, attracts unwanted attention and can drive away sponsors, many of the same pressures that keep gay players in the closet.

"It's not enough to have one prominent person, one functionary being open and open-minded and saying I support every coming-out," said Eggeling. "You need all people in a club. You need more than just a president to change the climate in football. But, of course, it's very important that Mr. Hoeness said what he did."

Coming Out Is Virtually Taboo Across Europe

All across Europe, it is virtually unheard of for any active professional athletes to come out, especially in the top leagues. Anton Hysen, a midfielder for Utsiktens BK in Sweden's fourth league and the son of a famous British Premiere League player, came out in 2011 and didn't experience any backlash. At the same time, closeted athlete's fears aren't without historical grounds. In 1995, the openly gay Swedish ice hockey player Peter Karlsson was murdered by a Swedish neo-Nazi.

In 1990, Justin Fashanu became the first professional football player in England to come out. Eight years later, Fashanu was accused of sexual assault by a teenager in the United States and was later found hanged in a garage in Britain. "I realized that I had already been presumed guilty," he wrote in a note. "I do not want to give any more embarrassment to my friends and family."

The trend reaches across the Atlantic to American football, where there has never been an openly gay active player, although three former National Football League players have come out after they retired. Earlier this month, Chris Kluwe, an active, heterosexual, professional American Football player for the Minnesota Vikings used the media to speak out on behalf of gay equality. Kluwe came to the defense of another heterosexual player, the Baltimore Ravens' Brendon Ayanbadejo, who had also been active supporting gay equality. Ayanbedjo was attacked by Emmett C. Burns Jr., a Maryland state delegate, in a letter to the owner of the Ravens. The politician demanded that the owner "inhibit such expressions from your employee and that he be ordered to cease and desist such injurious actions."

Kluwe, whose brother-in-law is gay, published an open letter on the American sports blog Deadspin admonishing Burns' attempt to silence Ayanbadejo's support for gay equality. "Your vitriolic hatred and bigotry make me ashamed and disgusted to think that you are in any way responsible for shaping policy at any level," he wrote in the letter. In American elections this November, voters in Minnesota and Maryland, among two other American states, will both vote on same-sex marriage rights. In the model of Gomez in the Bundesliga, Kluwe is a reminder of the little-exercised potential straight professional athletes have to shape public opinion on the matter.

But the idea of an active gay player giving an interview to the press, even anonymously, is totally unprecedented in Germany. Of course, some have also wondered aloud if it's a fake.

"It's important to take the first step," the player said, when asked why he was taking the risk of revealing his identity to a journalist. "Besides, you can understand my situation and it is easier to do it this way. Still, others wouldn't dare to take the same step, even anonymously. Maybe my colleagues don't feel the need to do so. It is my hope that we can speak again in a year and that I can then attach a name to what I say."

7 Bilder Photo Gallery: The Strain of Being Gay in the Bundesliga