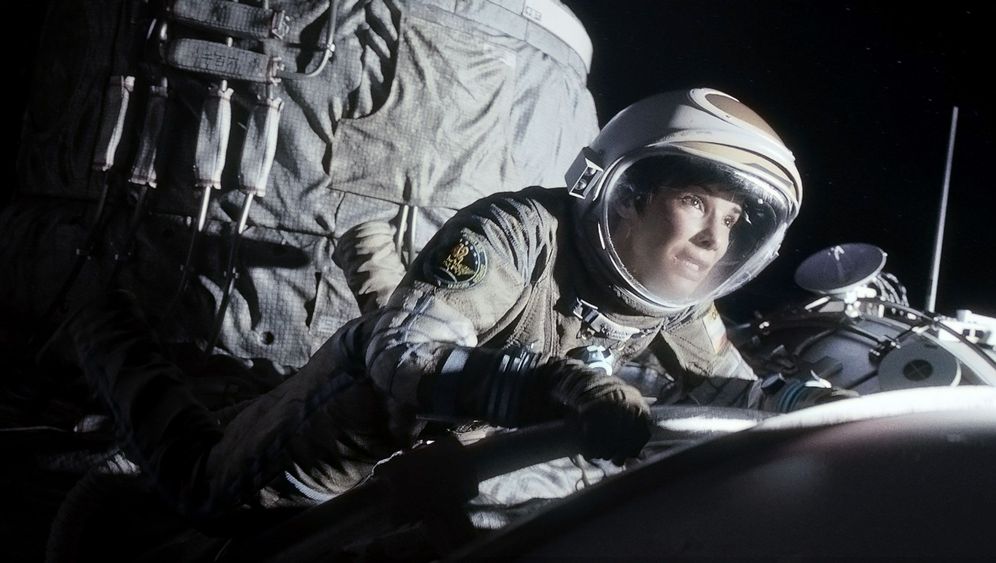 SPIEGEL: Mr. Walter, in the movie "Gravity," astronauts are caught in a hail of space debris while performing a spacewalk. Is that a real danger?

Walter: Yes, it is. Larger pieces of debris coming from used rocket stages or old satellites are catalogued, so you can avoid them. But it's impossible to record the many millions of smaller particles, including dust from meteorites. And even particles measuring millimeters are capable of puncturing a spacesuit, since they travel at 15 times the speed of a bullet.

SPIEGEL: Has such an accident ever occurred?

Walter: No, but it will at some point. When a spacesuit is punctured, it causes a loss of pressure. In the case of a small leak, though, air will escape only slowly, and today's spacesuits have an emergency supply that guarantees pressure for 30 minutes, enough time to get back onboard.

SPIEGEL: What if a space station, such as the ISS, were hit by a larger piece of debris?

Walter: Just like on a ship, there are bulkheads that, if there's an emergency, can separate an area that's no longer airtight from the undamaged portion of the station. The former Russian space station Mir actually did once develop a leak, after colliding with an unmanned cargo ship. Everyone survived.

SPIEGEL: In "Gravity," Sandra Bullock plays an astronaut who gets separated from her shuttle and ends up floating in space, completely untethered. Would it be possible to save an astronaut in such a situation?

Walter: Yes, in principle. These days, every spacesuit is outfitted with a small jetpack. The pack's range, though, is only about a kilometer, so it wouldn't be possible to fly tens of thousands of kilometers to the ISS, as the characters do in the film. In real life, everyone involved in that disaster would have died.

SPIEGEL: It doesn't sound like a very nice way to go, drifting through nothingness in a spacesuit, waiting to die.

Walter: On the contrary! When you're slowly running out of oxygen, the same thing happens as does when you're in thin air at the top of a mountain: Everything seems funny. And as you're laughing about it, you slowly nod off. I experienced this phenomenon in an altitude chamber during my training as an astronaut. At some point, someone in the group starts cracking bad jokes. Our brains are gentle with us. A person who dies alone in space dies a cheerful death.

SPIEGEL: Does "Gravity" portray the feeling of weightlessness accurately?

Walter: Yes, that unique experience comes across marvelously. A person moving in zero gravity feels a pitiful helplessness. One wrong move and you find yourself spinning wildly. Everyone becomes a baby again in outer space, laboriously learning how to walk. And in any case, I really have to compliment the filmmakers -- they reproduced the shuttle and the ISS hyper-realistically. They got it right, down to the last screw.

SPIEGEL: Even once the astronauts in "Gravity" have reached the ISS, the drama isn't over for them. A fire breaks out onboard the space station.

Walter: That happened on Mir as well. But the fire was quickly extinguished, because it's hard for a flame to keep burning in zero gravity. It needs to be fed with oxygen. On earth, that happens because hot air rises and fresh, cold air flows after it. Without gravity, that chimney effect doesn't work, so the flame soon smothers itself out. A fire that generates smoke is more dangerous -- on Earth, too, most victims of house fires die of smoke inhalation. When the fire broke out on Mir, the men put on gas masks.

SPIEGEL: Twenty years ago, you went to space on an American space shuttle. Was there a moment when you feared for your life?

Walter: No, none of us were afraid. After years of training, you have great confidence in the technology. When you get in your car, you probably feel safe too, even though thousands of people die in car crashes every year.

SPIEGEL: Did you experience any difficult situations on your way into space?

Walter: You could say so! My trip started with a launch failure. Three seconds before takeoff, the onboard computer switched off the engines, which were already running. There was hydrogen on the launch pad, which created an extremely high risk of explosion. The launch is always the most dangerous part -- once you're in orbit, there's not much risk.

SPIEGEL: Nothing went wrong while you were in space, then?

Walter: It did, but it was something harmless. Our toilet's urine tank broke. So we collected our urine in a plastic bag instead and poured it outside through an airlock. As soon as it contacted the vacuum of space, it formed a lovely cloud of urine snow and drifted away.