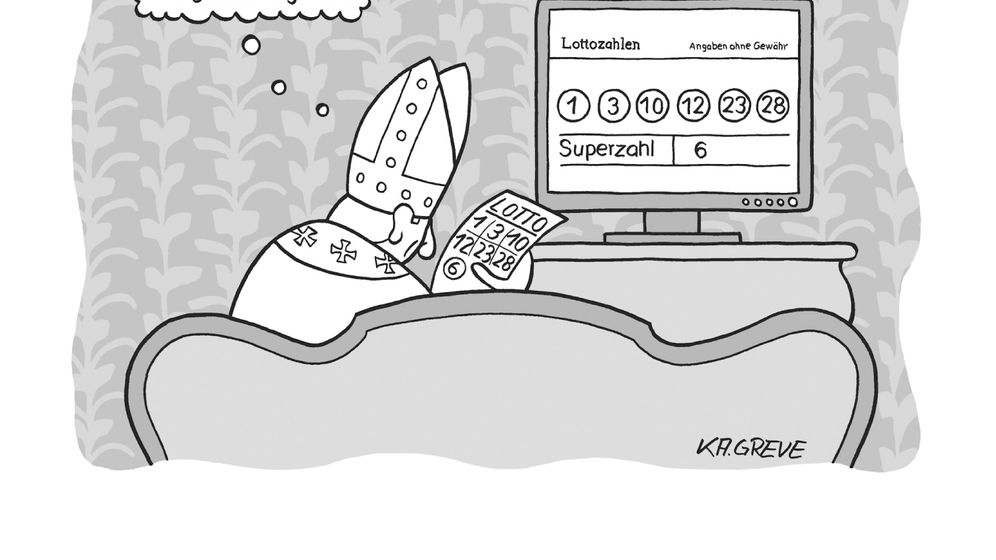 On Monday morning he tore off a page from his daily calendar, just like any other day. But then a bit later he heard the news on the radio: Pope Benedict XVI was resigning.

"I was a bit shocked," says Jürgen Holtfreter.

Certainly the announcement came as shock to many, but Holtfreter was positively mystified. The calendar he had updated was his own -- a page-a-day cartoon calendar called "Karicartoon" that he produces each year. The cartoon that he tore away from the day before, Sunday February 10, happened to be of the pope winning the lottery.

"Holy sack of straw!," the pope thinks as he sees all of his numbers come up on the televized lottery results. Then, the thought bubble became prophetic. "I'm quitting tomorrow!" it reads.

And then, as though the cartoon had predicted the future, Pope Benedict XVI announced he was stepping down.

Holtfreter says the 2013 calendar was finished around Easter of 2012. It was a coincidence "as unlikely as a lottery win," says cartoonist Katharina Greve, who originally created the prophetic drawing about a year and a half ago for the German weekly Frankfurter Allgemeine Sonntagszeitung.

"The pope is one of my favorite figures; the church is an institution with big joke potential," Greve adds.

The cartoon wasn't the only strange coincidence on that day, though. On Monday evening, two photojournalists and a BBC video captured stunning images of a bolt of lightning striking St. Peter's Basilica at the Vatican late on Monday afternoon after the pope's announcement. And this after one of his senior cardinals, Angelo Sodano, had made the widely quoted comment that Benedict's move was a "bolt of lightning in a clear blue sky."

Mere coincidences, or a message from beyond?