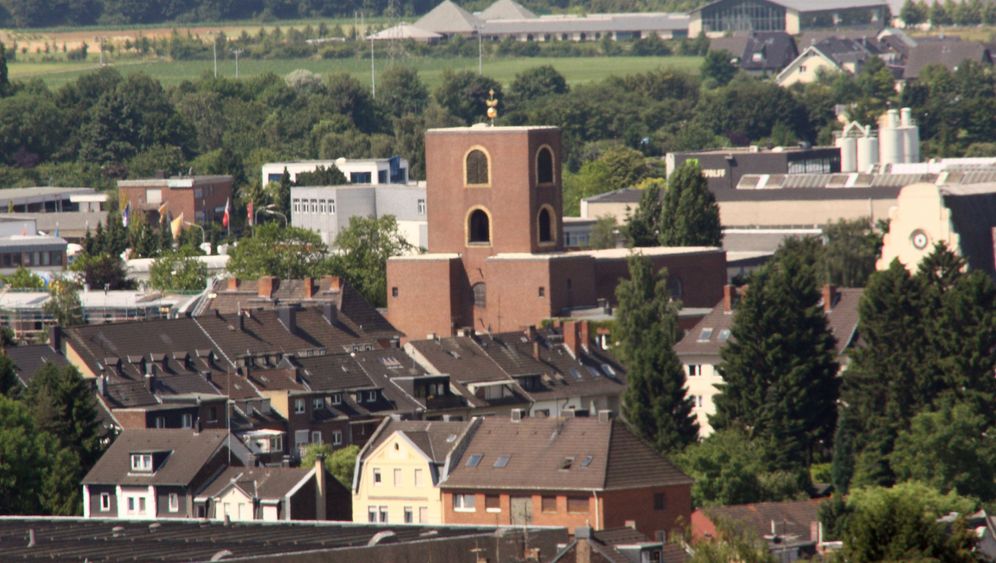 The crew tasked with demolishing the Holy Family Church in the northern German town of Barmstedt arrived bright and early and began by removing the baptismal font. Next, a bulldozer moved in and knocked down the main church hall and the bell tower. In the space of a just a few hours, this house of worship to the Almighty was reduced to a pile of rubble.

"Very painful," is how Rev. Stefan Langer describes the demolition of this church north of Hamburg. For years, Langer oversaw baptisms, weddings and services here, but now the former church grounds stand nearly empty. The congregation has put the plot of land up for sale, advertising the property as "developable land" in a "prime location," and asking a price of €310,000 ($416,000).

"Upon this rock, I will build my church," Jesus said with confidence. He said nothing, though, about demolishing those churches.

Two millennia later, churches are being forced to make dramatic cuts due to dire financial straits and declining membership. "Between 1990 and 2010 we closed 340 churches, and of those 46 were demolished," says Thomas Begrich, head of finances for the Evangelical Church of Germany (EKD), Germany's largest federation of Protestant churches. This, Begrich says, is only the beginning. "It may be necessary to give up an additional 1,000 buildings," he said.

Churches are being demolished throughout Germany. Take, for example, the city of Frankfurt am Main. In the 1950s, when Konrad Adenauer was German chancellor, there were 430,000 Protestants living in the city. Today, that number is 110,000. These declining numbers have forced the Church's regional authorities to close every fourth house of worship.

In Hamburg, meanwhile, a former Protestant church has ended up in the possession of the Muslim community for the first time, after a former church building in the Horn district of the city was sold in 2005 to a businessman who then sold the property to an Islamic center.

Church members were indignant over the transaction, but the EKD had little choice. If a buyer can't be found and a building is left standing vacant, eventually the only other option is to allow the bulldozers to raze it.

Things are no different for the Catholic Church. There are churches standing empty even in staunchly Catholic Bavaria, and one has even had to close in the famous pilgrimage site of Telgte, near Münster.

The central German town of Börssum, in the state of Lower Saxony, offers a typical example -- the Church of Saint Bernward here is facing demolition. The church is named for Bishop Bernward of Hildesheim, who lived from around 960 to 1022 and built defensive towers and forts to protect his followers from attacks by Normans and other non-believers.

Now, though, many of Börssum's own residents could fall into that category. The most recent figures show that only about 5 percent of church members in Börssum attend Sunday services. The laundry list of necessary repairs for the church buiding, meanwhile, has reached a total of €134,500.

There are also many church buildings in Germany that have already been used for other purposes, from art classes to sports courses. There are churches that serve as event locations or offer storage space for companies. St. Maximin's Abbey in Trier now serves as a school gym, while the Sacred Heart Church in Katlenburg houses a school for dance and Pilates.

'It Makes Me Ill'

When a local pastor announces that the time has come for a church to observe its very last supper, the declaration causes many a heavy heart among the congregation's members, who gather in the pews, contrite and often weeping, no one quite daring to strike up a hymn.

Protestant congregations tend to take a simple approach: Collect the Bible, cross and other liturgical items, and the last one out shuts the door -- that's enough to close down and deconsecrate a church.

For Catholics, on the other hand, every house of worship is a holy place and must be officially deconsecrated. Only a bishop or someone delegated by a bishop has the authority to conduct this ritual. With the air thick with incense, the bishop or delegate first reads out an official decree, then rolls up the altar cloth, empties the tabernacle where the host is stored and extinguishes the eternal light.

Rev. Michael Kemper, who conducted one final Corpus Christi mass in his Duisburg church, says it still pains him to remember walking beneath the altar canopy in his pale choir robe, past rows of bitter souls. "The closing of these churches makes me ill," he said.

That it is happening, though, is not much of a surprise. For 2,000 years, Christianity has lived and thrived on the fervor of its missionaries, but there are few people these days who want to hear that message. "Just 13 percent of children born today will be baptized as Protestants," says Thomas Höflich, a church superintendent in Hanover, in explaining the Church's tough downsizing decisions.

A Little Piece of Home

The situation for Catholic churches is particularly bad in the Ruhr region of western Germany and in northern Germany, places that saw an influx of refugees from the former German lands of Silesia and East Prussia after the Second World War. The church established small "branches" throughout these areas, so that there was always a confessional for parishioners within walking distance.

But now these small houses of worship, often built in an unappealing modern style, are at very high risk of being demolished. In the Diocese of Hildesheim, one out of every two churches is on the endangered list, while in the Diocese of Essen, 83 churches are slated for demolition and another 13 have already been torn down. The situation is the worst in Wilhelmshaven, where six out of nine Catholic churches are slated to be destroyed.

There are certainly people in Germany -- including historic preservation specialists, cultural groups, and city planners -- who are resistant to this destruction of churches. For many Germans, these places of Sunday worship are a familiar part of the urban backdrop. As theologian Margot Kässmann puts it, churches are "prayer-filled spaces" and each one that is torn down amounts to the loss of a little piece of home.

But when church officials explain that there's little point in heating a church that has no thermal insulation and high-arched ceilings every Sunday for just 10 churchgoers, these critics of closing churches are also left at a loss for what to say.

And so the demolition continues. In the eastern part of the country, more than 200 village churches are gradually crumbling. In the city of Wiesbaden, even a church that was listed for historic preservation was recently torn down.

But every cloud has its silver lining, and in this case there's the opportunity for hard-up congregations to turn no longer needed items such as collection boxes and wooden altars into cash through new websites dedicated specifically for this purpose, such as "Kircheninventar-verkauf.de."

Congregations can even sell the church buildings themselves online. The Archdiocese of Berlin is active on eBay, where it is offering for sale "a church in a popular residential area" in the nearby city of Brandenburg.

Yet many of these properties do not find a buyer. Most churches have cold floors and high ceilings of 10 meters (30 feet) or more, and lack kitchen facilities. Even give-away prices often aren't enough of an incentive. The Maria Goretti Chapel in the small northeastern city of Demmin, for example, costs just €20,000, but no one wants to buy it.

A church that has been standing empty for months in the small western German city of Altena provides another example of just how sluggishly these sales move. "Built in 1907 and all natural stone!" chirps realtor Dan Ossenberg-Engels, producing an iron key and opening the building's main door, which creaks as he pushes it.

Blue light filters through the rose windows, illuminating wooden pews and an enormous chandelier. "One prospective buyer wanted to put in a drop ceiling and live here," Ossenberg-Engels relates. Now the realtor is in negotiations with an entrepreneur who wants to convert the building into a music club. The pulpit would certainly serve well as a DJ stand.

Hauled By Truck to Romania

Hip-hop replacing hallelujah -- is that going too far? What is acceptable and what crosses the line into sacrilege?

The Protestant EKD has made its peace with its properties being taken over by groups who take the buildings' former purpose lightly. Still, if given the choice, the Church prefers purposes that preserve the "dignity of the space," such as nursing homes or preschools. The Church is also happy to accept one of its former buildings being put to use as a site for burying cremation urns, or converted into choir practice rooms. In Boostedt in northern Germany, one undertaker even uses a former church to display his coffins.

The Church is even happier if it can find buyers who are fellow Christians, for example, Russian or Serbian Orthodox congregations. One church near Lake Steinhude was even hauled to Romania by truck, to be used by a congregation there.

These churches have no choice but to make compromises. One funeral chapel in Berlin is now being used as a theater, while the sanctuary of a church in the northern town of Milow houses an ATM. And in the former Church of St. Martin in the city of Bielefeld, patrons relax in lounge chairs and dine on white truffle cream and wasabi dip to the tinkling of background piano music.

For the Catholic Church, this is going too far. Although the church has allowed some of its properties to be turned over for less-than-sacred uses -- a rock climbing facility, for example, with a vitamin bar in the nave and showers in the former sacristy -- in most cases, the church takes a stricter approach. If a building is in danger of falling down and no suitable buyer can be found, the Catholic Church prefers to simply tear it down.

Not for Other Religions

One point on which it seems both the Protestant and Catholic Churches can agree is that sects and other religious groups are generally not acceptable as buyers. A handbook issued by the Protestant Church in Hesse and Nassau says that in order to avoid increasing the "fog of religious diffusion," the sale of church buildings to Muslims or Buddhists, for example, is "not possible."

Where Muslim communities have nonetheless taken over former church buildings, they are generally properties that belonged to unaffiliated churches. In four cases so far, such churches have sold buildings to Muslim congregations. In addition, there's the one former Protestant church in the Horn district of Hamburg that went through an intermediate step before then being bought by a Muslim group.

There's no doubt about it -- the Christian churches' fighting spirit is a thing of the past. The publication Spirit estimates that out of about 45,000 churches in Germany, 15,000 soon will no longer be needed. These buildings are simply too opulent, too empty and too expensive to maintain, something akin to an aging grandmother still living in a mansion when just one room would do.

But all this should not worry pious minds too unduly. The Bible itself offers faith and love, solace and hope, enough to cover even this thoroughly modern real estate problem.

Most relevant is the passage in 2 Corinthians 5:1 -- "For we know that if our earthly house of this tabernacle were dissolved, we have a building of God, a house not made with hands, eternal in the heavens."