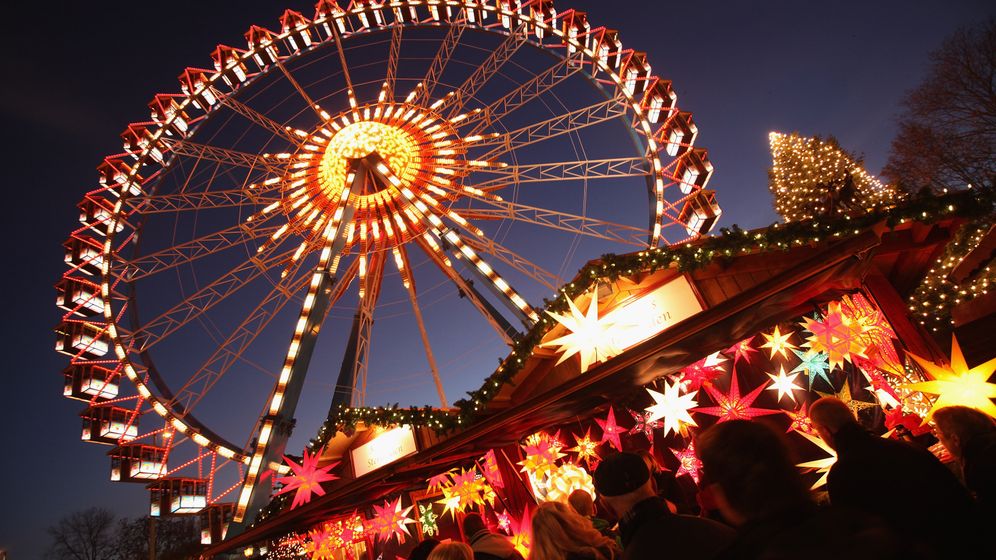 Many people's ideal of a Christmas market is a collection of wooden stalls selling nutcrackers, mulled wine and fried sausage, preferably on a cobbled square framed by half-timbered houses. This ought to be accompanied by a band playing Silent Night, though not too loudly, gentle snowflakes and a tastefully decorated fir tree in the center.

The only admissible ride is a carousel, but it has to be old-fashioned and low speed, with rocking horses and the like. Also, there shouldn't be too many people congesting the paths between stalls.

Good luck with that. Some of Germany's 1,500 Christmas markets are tacky affairs, offering funfair rides like rollercoasters and neon-flashing Ferris wheels with blaring pop music, not to mention the cheap imports of replica nutcrackers on sale.

Berlin is a prime example -- the Alexanderplatz Christmas market is a seasonal Disneyland. The trend is disturbing, said a conservative politician and a Catholic bishop on Wednesday, just days before the first markets open.

"A Christmas market isn't an extended Oktoberfest," Johannes Singhammer, a member of the Bavarian Christian Social Union party, told Bild newspaper in a front-page story. The bishop of Hamburg, Hans-Jochen Jaschke, said people looked forward to the Christmas markets. "They feel something very special. Only Advent and Christmas can offer that. That is why big funfair rides don't belong in Christmas markets."

Were the trend to spread, it could damage the image of a major national tourist attraction. Germany's Christmas markets lure millions of visitors and the tradition has become established in other countries. One of the biggest German markets stands in the British city of Birmingham and gets some 5 million visitors a year.

The traveling circus of fairground operators say they increasingly need the Christmas business because the number of classic funfairs has shrunk by a quarter in the last 12 years. They now earn a third of their income from Christmas markets, according to the German Fairground Industry Federation.

Kurt Stroscher, one of Germany's leading experts on Christmas markets, sees a marked divide between eastern and western Germany in this respect.

"If you take Berlin or parts of eastern Germany, there's a tradition of having a funfair element linked to Christmas markets," Stroscher, a senior official in Frankfurt's tourism department who pioneered the launch of markets in several British cities including Birmingham, told SPIEGEL ONLINE.

"It lacks the atmosphere you associate with Christmas, the hominess that awakens nice childhood memories."

Commerce drives the trend, he said. "Unfortunately, people are accepting it," he added. "Alexanderplatz is a good event in terms of visitor acceptance."

The market does sound fun. This year, its attractions will include an ice skating rink and toy train ride though a "fairy-tale forest." Alexanderplatz, like many other markets, will also feature lottery booths packed with cheap toys and other typical funfair games like throwing at cans or fishing plastic ducks out of water.

The eastern markets can't all be tarred with the same brush, though. The Dresden market is a credit to the Christmas tradition, and the whole Ore Mountains region, the home of the nutcracker, is synonymous with German Christmas.

So will the funfair element gain ground? Is the tradition in danger?

"I wouldn't say so at all," said Stroscher. "I can assure you that we in Frankfurt wouldn't dream of experimenting with funfair rides. On the contrary, our success and that of other markets stems from our authenticity. Preserving the rustic charm is part of our marketing concept. I'm pretty sure my colleagues in Nuremberg or Munich wouldn't consider it either."

A range of Christmas traditions adopted across the Western world originated in Germany, including the Christmas tree, the baubles that go on it and a host of wooden crafts.

German artisans pride themselves on their Christmas fare and aren't especially concerned that their centuries-old tradition is in danger. Chinese-made nutcrackers have been flooding the market for years, but that hasn't fazed the craftsmen and women of the Ore mountains where the nutcracker, the rotating pyramid or the Smoking Man were invented.

The latest assault on Christmas comes from a butcher in the town of Aue, in the region of Saxony. In what some would call an act of heresy, the family-run shop has recreated the Dresden Stollen Christmas cake, but made from roast veal, bacon and cranberries.

"People either love it or hate it," admitted butcher Christin Popella. The meat Stollen will go on sale for the first time this year.