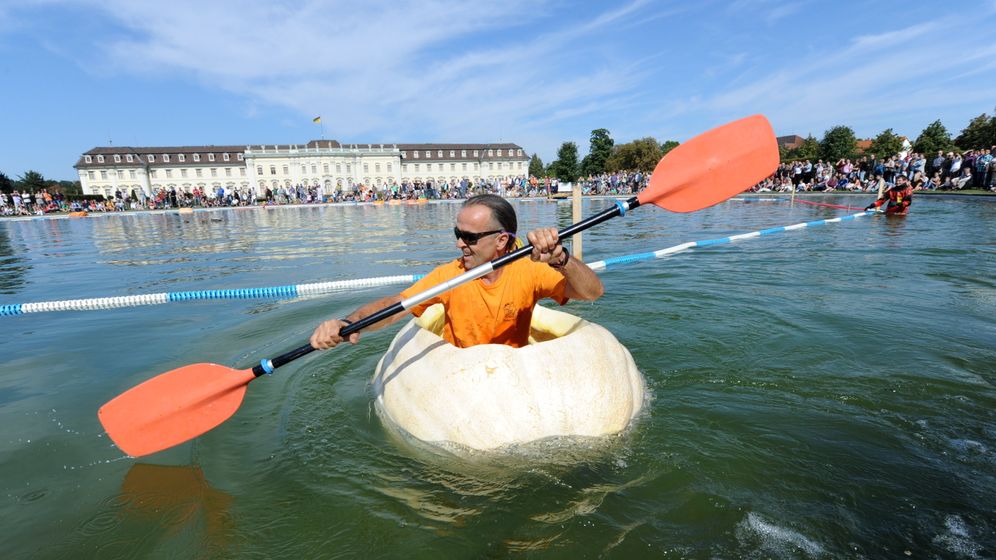 Photo Gallery: Off to the Pumpkin Races

We've heard of pumpkin seeds, Jack-o-'laterns, pumpkin pie and pumpkin soup. But pumpkin boats? You're pulling our leg, right? As it turns out, this is no pre-Thanksgiving stunt. The city of Ludwigsburg near Stuttgart in southern Germany is home to an unusual autumnal tradition: the pumpkin regatta.

Forty hobby athletes showed up to compete in hollowed out orange pumpkins weighing up to 360 kilograms (771 pounds) in one of Europe's most unusual water races on Sunday at a lake in front of the baroque Ludwigsburg Palace.

At the regatta, pumpkin-paddlers had to complete a 60-meter course, but Hinner said they could actually cover much greater distances with the hollowed-out vegetables. Although their "shell life" is limited, these squashes don't squash that easily, and Hinner says they can still be used for paddling "into next week". In order to glide optimally over the water, the participants must hollow out roughly the equivalent of the weight of their own bodies from the pumpkins.

Got designs on becoming next year's premiere pumpkin paddler? Then you'd better work on your technique. Hinner said the size of the pumpking is not a decisive factor in determining who wins. "Big doesn't mean good," Hinner said. "It's all about the canoeist."

The fastest pumpkin-paddler -- Patrick Reyinger from the nearby town of Bietigheim-Bissingen in the Swabian region -- crossed the finish line after just 52.9 seconds, taking the €200 prize ($262). After his victory, Reyinger replenished his energy with a fitting dish. "He insisted on having a bowl of pumpkin soup," Hinner said.

Sunday marked the ninth time the regatta was held at the palace. When organizers held the first race, people didn't seem quite convinved of the pumpkins' ability to float. Only three participants bothered to show up. The regatta has proven far more popular in recent years.