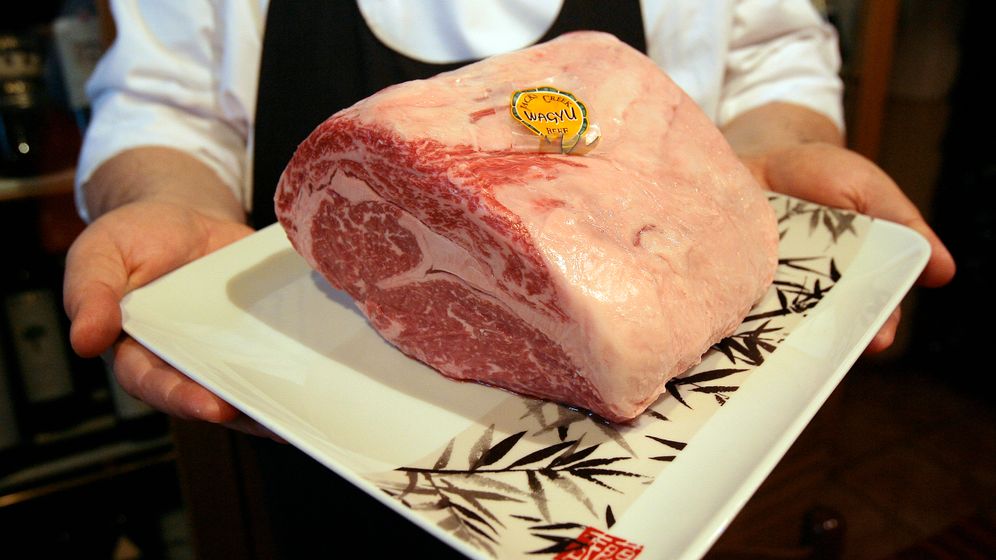 If you're a steer, Rüdiger Marquardt's farm in Negenharrie, near the northern German city of Kiel, is a pretty nice place to live. In fact, it's practically a spa for ruminants. In light-filled barns, the cattle eat fresh hay soaked in beer, while the music of Simon & Garfunkel plays in the background. An electric feed mixing cart quietly distributes wheat bran. The lights are dimmed at night, and massage brushes rotate along the walls.

There are about 80 wagyus in Marquardt's barn. The jet-black animals provide the world's most tender fillets. Marquardt points to a munching cow: "This is Akemi. On the meat hook, she goes for €20,000 ($26,600)."

But this cow is far too valuable to be turned into food just yet. Yojimbo, a bull Marquardt is using in a "natural mating" process, is already anxiously pacing around on the meadow outside. "Akemi can provide up to 30 embryos in the course of her life," he says. "We cool them down to minus 196 degrees Celsius (minus 321 degrees Fahrenheit) and sell them for €1,000 apiece."

The inseminated embryos are sold to a small group of farmers involved in an ambitious breeding project that aims to create an independent population of purebred, or "full-blood" wagyus in Germany. The exclusive association already comprises 35 farmers.

The pioneers cannot expect any support from the country where the precious cattle come from. Although there are about 750,000 wagyus in Japan, they are considered a national treasure and exporting the animals is illegal.

This didn't deter the Germans, who obtained frozen embryos and sperm through detours in the United States and Australia. German farmers now have about 15 valuable breeding bulls and more than 300 cows and steers -- enough to become players in the competitive market for premium wagyu beef.

Because the cattle from the Far East grow in slow motion and are given 36 months until they reach slaughter age, their meat tastes unbelievably aromatic. The marbling in the muscle flesh produces a nutty taste when cooked.

From Johann Lafer to Horst Lichter to Alfons Schuhbeck, practically all the avant-garde German chefs rave about wagyu steaks and their butter-like consistency. Connoisseurs fry the meat without seasonings in hot clarified butter to a medium temperature, and then toss it in flakes of smoked salt.

Wagyu beef can also be used to make excellent sukiyaki or ox muzzle cut into strips. Sansibar, a beachfront restaurant on the North Sea resort island of Sylt, invented wagyu burgers with truffled Parmesan French fries. Even the marrow, dubbed "bone pudding," is said to be delicious. "Simply every part of these animals tastes good," claims Marquardt.

The ancient Romans feasted on grilled nightingales and dormice stuffed with pine nuts. The hype over wagyu isn't that far removed from such decadence. The price, however, is enough to spoil your appetite. Marquardt sells his wagyu fillets for €598 per kilogram (about $363 per pound*).

There is also another problem. Although specialty food stores, online retailers and restaurants sell the precious beef, they get most of their meat from the United States or Australia, where it comes from F1 animals. The abbreviation stands for crosses between wagyu bulls and cows of other breeds. The meat is flash-frozen and transported across the ocean in refrigerated ships.

Real wagyu steak from animals raised on German pastures, aged in a refrigerated room for 28 days (during which the meat loses 20 percent of its moisture and enzymes tenderize the fibers), is all but unobtainable. Fewer than 30 full-blood animals were slaughtered in Germany last year.

Not surprisingly, the demand is enormous when a real Japanese steer is slaughtered in Germany. Last week, breeder Steffen Schäfer showed up with his butcher van at the market on Berger Strasse in Frankfurt. He had brought along steaks and roasts from a wagyu cow named Ito, but the beef was already sold before it arrived -- to customers who had ordered in advance.

The Japanese also eat the meat raw, like sushi. They have created a marbling scale with values from one to 12. At values of eight or above, the meat looks like salami and practically melts in your mouth.

The Japanese jealously guard the precious bovines, which reached the island from Korea around the birth of Christ. At first, they were used primarily as draft animals, and eating them was long taboo. Eating the wagyu was still a punishable offence under the Emperor Temmu (672 to 686 A.D.).

It was only after the invention of the tractor that oxen and cows were increasingly consumed as food. The region around Kobe became especially famous for the cattle. To this day, legend has it that Kobe cattle farmers massaged their wagyus and fed them beer to tenderize the muscle fibers.

The truth is that because of the scarcity of pastureland in Japan, the animals were fed waste materials from beer production. And they were massaged to prevent muscle cramping in the animals, which were kept in small stalls.

Authentic cattle from Kobe are subject to a strict certification regime in Japan today. Their slaughter weight can be no more than 470 kilograms, and the marbling score must be 6 or higher. None of these top-notch cattle has ever left Japan.

Only normal wagyus were exported. In 1976, a US company shipped four bulls to Texas. More animals were sent to the United States by air and sea in the mid-1990s. Shogo Takeda, a large-scale rancher, delivered 45 of the horned cattle to another rancher and friend of his in the United States.

Then Tokyo stepped on the brakes.

A total of only about 200 full-bloods were shipped abroad, but it was enough to develop purebred herds in Canada, Australia and the United States. Later, the Argentines, Chinese and, more recently, the Spaniards developed their own herds from those initial bloodlines.

Now the Germans are getting into the business, too. The group of wagyu breeders stretches from Lake Constance in the southwest to the eastern state of Brandenburg. In mid-July, a wagyu was sold for the first time at a cattle auction in the northwestern city of Münster. It was only 10 months old and relatively small, and yet it fetched a price of €10,000.

The exotic cattle are so important to German breeders that they positively pamper them. Ludwig Maurer, from the Bavarian Forest, spoils his wagyus by talking to them for 10 minutes a day and adding rock salt to their feed. Others reportedly feed the animals sake or play Mozart to castrated bulls.

Sepp Krätz, who owns one of the beer tents at Munich's Oktoberfest and keeps about 35 full-blood wagyus at his ranch near Ammersee Lake, grooms his animals with a brush. The oldest breeding bull is named "Opus Ecki," after his mentor, top chef Eckart Witzigmann.

In truth, this is all nothing but hype to fuel the myth of the luxury cattle. Wagyu meat doesn't get tender and buttery because the animals are pampered, but rather as a result of what they are fed. In the last six months of their lives, they eat nothing but beets, soybeans, potatoes and grain.

"Because of their genetic makeup, the animals can put on an astonishing amount of intramuscular fat," explains Steffen Maak of the Leibniz Institute for Farm Animal Biology, which monitors the German breeding program from a scientific perspective. "It's a wonder that they don't drop dead."

But a calm death is also important for meat quality. If a wagyu were given the same treatment as ordinary cattle, which are driven long distances in cattle trucks to be killed in large slaughterhouses, the meat would be overloaded with stress hormones and lactic acid.

To prevent this from happening, the association is seeking to develop a new, centralized form of marketing. Weeks before slaughter, all German wagyus will be taken to a large barn in the western state of Hesse with 170 stalls, where the four-legged animals can calm down and eat to their hearts' content.

Only then will a friendly butcher take the animals to the killing floor, one by one, to calmly place a bolt gun against their foreheads. There is hardly a better way to die in the bovine family. "The product is then marketed directly through an online shop," explains a member of the association.

As clever as the concept may seem, it doesn't fix the current imbalance of supply and demand. That is why farmers are looking for better ways to utilize the carcass. Together with top chefs, they have developed recipes for wagyu kidneys, spleen, tripe and lips -- all normally considered disgusting offal that is hardly fit for human consumption.

But in the case of wagyu, says the association, it's a different story. The entire animal becomes a culinary delight and the body of the eater a temple of pleasure. In its latest issue, the gourmet magazine Beef! even featured a "testicle frittata" with crème fraîche and quail eggs.

The bulls' testicles have a "slightly nutty" flavor, the magazine writes enthusiastically. "They solidify during cooking but remain elastic."

*Correction: A previous version of this article suggested that Rüdiger Marquardt sells his wagyu fillets for $1,760 per pound. That is inaccurate. The correct conversion is $363 per pound. We apologize for the error.