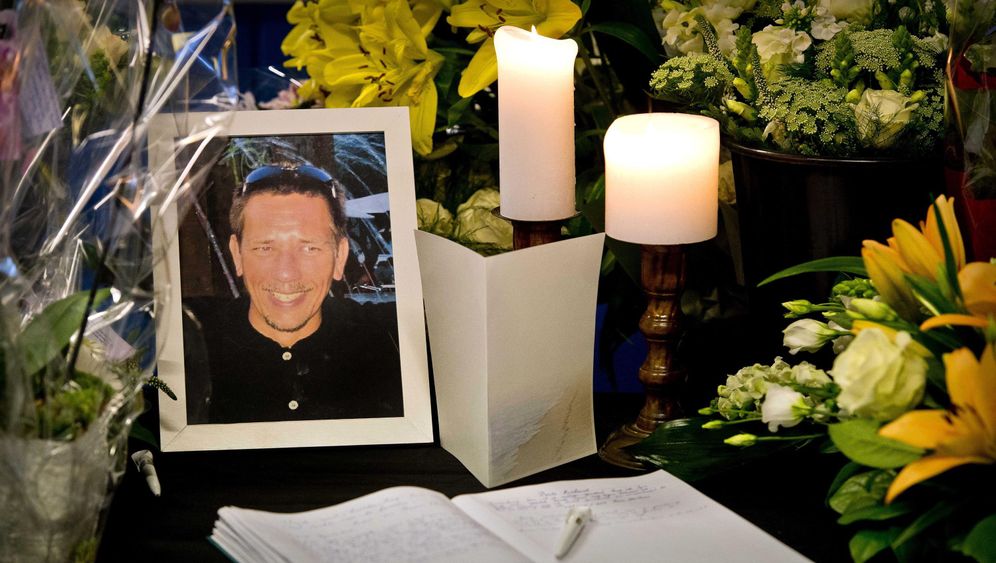 Photo Gallery: The Dangers of Officiating

One month ago, Daniel Maurer received a dire warning: "We're going to find out where you live -- and when we do, you're dead." Since then, the 23-year-old always hesitates before getting out of his car when arriving home after dark. He glances around nervously, listens and waits. He just can't shake the fear.

Maurer is neither a mafia investigator nor a motorcycle gang leader. He's a referee in Munich's junior youth soccer leagues. During a recent "A" Youth League match played by JFG Union München Ost, he awarded a penalty kick to the opposing team -- and promptly received so many death threats that he decided to throw in the towel after the final whistle. Maurer says he will never referee another match.

He's not the only one to capitulate in the face of mounting violence at amateur soccer games. Hans-Jürgen Schreier and Andreas Hitzlsperger, two senior referees from the southern German city of Dachau, resigned from their positions in mid-November. For over 20 years, both men have presided over games in the Munich area, trained referees and assigned them to matches. Now, they say they can no longer guarantee their people's safety. Although the majority of games end peacefully, there are violent incidents every weekend, and young referees, in particular, have apparently become moving targets for certain fans and players.

"We don't want to wait until we receive a phone call that one of our junior colleagues is lying severely injured in the hospital or has perhaps even fallen into a coma," says Hitzlsperger, the brother of Thomas Hitzlsperger, a former midfielder on Germany's national squad who currently plays for Everton.

The most violent incident to date recently occurred in the Netherlands. On December 2, 41-year-old linesman Richard Nieuwenhuizen was attacked by players. He had volunteered as a linesman in a game between 15- and 16-year-olds in Almere, a town near Amsterdam. Disgruntled with his offside decisions, a group of young people followed him after the match, threw him to the ground and repeatedly kicked him. Nieuwenhuizen died the following day in the hospital. Schreier and Hitzlsperger are afraid that such a vicious attack could also occur on German amateur soccer fields.

There is nothing new about violence among lower-league clubs. But there has been a dramatic increase in the brutality that coaches, spectators and amateur players have been unleashing on the impartial arbiters of the beautiful game.

Dachau-based referee Maurer was already attacked by players during a game three years ago. He had to flee to the locker room and only ventured outside once the police arrived. At the time, Maurer thought that he had simply run into a patch of bad luck, an exceptional situation of sorts. But the fact is that attacks on amateur referees have become almost routine these days.

After losing a regional league game to SuS Haarzopf Essen in western Germany's industrial Ruhr region in March, a SC Blau-Weiss Oberhausen player and a spectator attacked the referee, threw him to the ground when he tried to escape to the locker room and seriously injured him. At a recent "B" Youth League match near Munich, a teenager threatened a referee with a broken bottle.

In October, a player from the Bavarian team FC Iliria savagely attacked the man who had refereed an amateur match against ESV Rosenheim. The victim nearly lost his eyesight. The violent attack was provoked by the referee's decision to allow extra playing time, which gave ESV an opportunity to score a late equalizer. Another Iliria player thrashed the Rosenheim coach as he was trying to help the referee. The coach was rushed to the hospital with bruised ribs and a damaged kidney. The local soccer association banned the perpetrators for life.

A few weeks ago, in the western German city of Darmstadt, referees in the D District League also went on strike for two Sundays and didn't officiate a single game. The Darmstadt Referee Association wanted to draw attention to the increasing amount of violence. Following the goal that put the score up to 5-0, TG 1875 Darmstadt players chased a referee across the field before kicking and choking him.

Battered but Uncowed in Berlin

The situation has become especially critical in Berlin. Over a year ago, referees in the German capital went on strike. During an important lower-league match, 52-year-old referee Gerald Bothe had been attacked and seriously injured after ejecting a player. The beating caused Bothe to swallow his tongue and nearly asphyxiate. A player on the opposing team saved his life.

Wishing to send a clear message, the Berlin Referee Association distributed an anti-violence flyer. But Bothe says: "Nothing has changed." The male nurse, who continues to ref up to three games every weekend, was recently attacked again. After an over-40 league match in the Berlin district of Kreuzberg, he noticed that a player for Türkiyemspor Berlin had been on the pitch with the wrong player pass. When Bothe told the team that he would have to mention this in his report, two players stormed the locker room and threatened to beat him up. This time, bystanders were thankfully present to intervene early enough.

"Many see a soccer field as a place where they can let off steam. Frustration at work, at home, with their girlfriends -- they think they can compensate for everything when they're on the field," says Bothe. He receives €15 ($20) for every game he officiates, plus €5 to cover travel expenses. But despite the danger and meager pay, he doesn't want to quit, because he believes it would send the wrong message. Instead, he's working with colleagues on a proposal aimed at reducing the violence on Berlin's soccer fields.

Indeed, the future of the game is at stake, and it remains to be seen whether enough idealists can be found who are willing to subject themselves to the ordeal of serving as a referee.

The death of the linesman in the Netherlands has unnerved junior referees more than anyone else. "Everyone is shocked," says Franz Mühldorfer, a senior referee for TSV Rudow, a club in southern Berlin. Mühldorfer supervises 25 young referees, most under the age of 20. He says he now has to "calm the guys down, raise their spirits and encourage them." Only last October, a 16-year-old from his group received a death threat over his mobile phone after an indoor tournament. "I'll chop your arms and legs off -- you're playing with your life," the anonymous caller reportedly said.

Mühldorfer has told his referees that he's prepared to back them up and accompany them on the field if they need the extra support. After all, he knows from experience how rough it can get. Mühldorfer refs games in Berlin's youth leagues. He's been hit in the face, choked and spat on by both players and coaches. Mühldorfer has called the police onto the pitch eight times.

Now, he knows how to defend himself. When he presides over a game where he thinks there might be trouble, he takes pepper spray and his mobile phone with him onto the field. He recently purchased a tiny camera that he places in his breast pocket so he can gather photographic evidence if attacked.

Some 1,500 soccer games are played in Berlin every weekend. During the 2010/11 season, 59 matches were suspended, usually due to threats, violence and abusive behavior. Over the past season, the number of curtailed games rose to 96. An increasing number of referees will admit, off the record, that they are afraid of problematic teams. They say that they often lack the courage to call a penalty shot or issue a red card out of fear that the players could go berserk.

Surprisingly enough, these refs officiate in leagues where amateurs with limited skills face off on the field. At stake here are perhaps three points, seventh or ninth place in the standings for the 10th league, promotion or relegation -- but money, careers and the team's existence are not on the line.

The violence on today's streets and underground railway stations has now spilled over onto the soccer fields. "Football is a reflection of society," FIFA President Sepp Blatter said following the beating death of the linesman in the Netherlands. That sounds as if this were an issue for politicians and the justice system, and not something that requires the attention of officials at soccer's international governing body.

However, Bavarian referee Hitzlsperger is no longer willing to accept this attitude among top association officials. "A player has already threatened to stab me and burn down my house," he says. "I even once had one standing at my door. These are things that can really frighten people." Only a week before he resigned, Hitzlsperger sent emails to the Bavarian Football Association (BFV) in which he wrote: "We can't go on -- we need help." But he received no support in return.

In fact, the association didn't react until Hitzlsperger and fellow referee Schreier resigned. Then it called on the men to make no further public statements on the issue.

The BFV complains that the two men made sweeping accusations and offered no solutions. It also points out that it has conflict managers who are dispatched to monitor amateur games -- a few dozen to cover 15,000 matches every weekend. It claims that violent attacks against referees and suspended games are only rare occurrences.

Hitzlsperger accuses the BFV of downplaying the situation. He's calling for harsher punishments for the culprits -- and he suggests deducting points from the teams of perpetrators. But the BFV doesn't see this as a wise approach. If young people are banned from playing soccer, an association official argues, it merely shifts the violence onto the streets.

Herbert Fandel, the top referee in the German Football Association (DFB), agrees, saying the call for tougher sanctions is a populist approach. After the linesman's death in Almere, Fandel admitted that the association shouldn't turn a blind eye to the fact that there is also violence against referees in Germany. But he said it was up to the country's courts to mete out punishment. In other words, it's apparently not the DFB's problem.

Up until now, sports association officials have only resorted to cosmetic measures to improve conditions in amateur and youth leagues. After a special BFV sports court had to deal with thousands of cases of parental sideline rage in recent years, the Munich municipal district decided to abolish the standings for the "F" Youth League. The official justification was that children should be able to play in a free and relaxed manner.

However, this has unfortunately not improved the situation for referees. The problem with aggressive parents has merely moved elsewhere. Now, referees say that the atmosphere has become far more aggressively charged in the next age group, where 9-year-olds face off in the "E" Youth League.