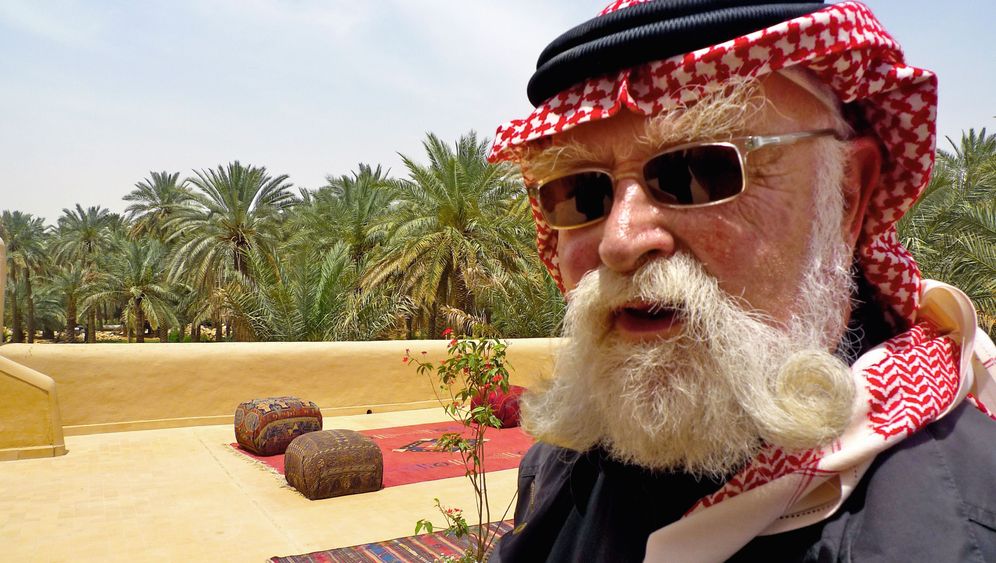 In the Koran, paradise is often described as a garden, a tranquil place where trees provide shade and cool water flows though streams. Pretty much like the private farm belonging to Prince Sultan bin Salman bin Abd al-Asis Al Saud, son of the Crown Prince and Minister of Defense of Saudi Arabia.

The 56-year-old's home features an artistic water landscape in the middle of the desert just outside the capital, complete with a philosopher's walk where he likes to stroll in the evening.

The prince is in high spirits. Dressed in a white thawb and a checkered ghutra, he sits at a long table surrounded by bougainvillea and anemones. Next to him in a place of honor is Richard Bödeker, who hails from Neandertal near Düsseldorf, Germany.

Clad in head-to-toe black, the landscape architect sports a beard and a twirled mustache. "Richard of Arabia," as the Saudi princes like to call him, looks like an eccentric professor.

"How are you, Richard, my friend?" asks His Royal Highness. Bödeker sighs. Now 75, he has been fulfilling the extravagant wishes of his clients in Saudi Arabia for nearly 40 years.

Bödeker tugs at his beard. Princes and princesses come up with some fantastical ideas, he says, straight out of fairytales. And Bödeker is entrusted with turning these ideas into reality.

Sultan bin Salman recently bought land near Ta'if, a relatively small city on the slopes of the Sarawat Mountains south of Mecca. Tomorrow, Bödeker will board the Prince's private plane and head to Ta'if to create an oasis, a botanical idyll with roses and lavender and natural stone sculptures. The Prince himself will be flying the plane. Bödeker rolls his eyes.

His influence on the way Riyadh looks today has been considerable. When he first arrived in 1973, it was a sprawling, dusty city sliced up by six-lane freeways.

"You need to get concrete out of your head and replace it with greenery," Bödeker had thundered at the head of planning at the urban planning authority. The gruff German made such an impression that to this day, Saudi authorities continue to hire and recommend him.

These days, the city's main axes, such as King Faisal and King Abdullah Road, run in tunnels underground, covered at street level by parks just as Bödeker envisaged. The former palace grounds in the heart of the city has been transformed into the lavish 100 Palm Park, where the trees symbolize the centennial of the Saudi dynasty.

The diplomatic quarter is another oasis. The German Embassy also commissioned Bödeker to landscape its gardens. Leafy labyrinths crisscross Riyadh's center and children splash in the water on its playgrounds. The city is now home to a number of gardeners, most of whom were trained by Bödeker's team.

No Time For Politics

The secret to Bödeker's dealings with Saudis is the blend of tolerance and fundamentalism on both sides: The Arabs are deeply conservative Muslims, while Bödeker is fervently green.

"I don't have any time for politics" he says. He's only interested in trees and gardens, and to Germans who get worked up about women not being allowed to drive in Saudi Arabia, he says the solution is the planned subway system.

The public beheadings by sword that sometimes take place on Fridays on Deera Square do nothing to loosen his bond to Saudi Arabia. Other cultures, including in America, also execute criminals, he points out, adding that many criminals have been pardoned here too.

Servants arrive with dessert on silver trays full of rice pudding sprinkled with brittle, rose water, wild fruit sorbet and baked goods dripping with sugar. These days, Bödeker shares his office in Riyadh with several partners and family members. His son Jens joined the Saudi business a few years ago and his wife Alexandra is also a successful landscape architect. It was the only way they could meet demand in Saudi Arabia.

The Bödekers come up with some inspired ideas. They broke a taboo when they used the capital's sewage water to irrigate a desert valley. Today it's a lush landscape where princes and oil magnates like to build their villas.

But will they soon reach a limit? To what extent can a desert be brought to bloom? Bödeker is optimistic. The Saudi princes' gardener and his team have been commissioned to do the impossible: to turn the arid valleys of Riyadh Province -- bigger than Germany -- into flourishing countryside.

It's possible, insists Bödeker. "There are plants that put down roots 50 meters into the ground, and there is water that far down."