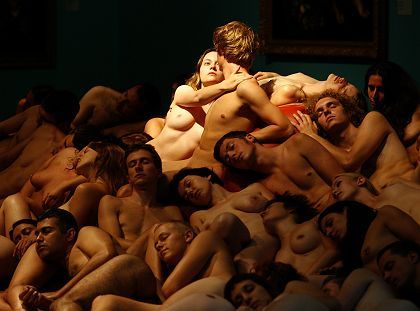 Appearing neither stressed nor over-worked, these people seem to support Beer's theory.

That sex reduces stress - or that no sex increases stress - is hardly a new observation. A team of German researchers, though, is arguing that sexual frustration is a complex phenomenon not to be underestimated. It can precipitate a downward spiral, pulling couples helplessly and unbeknownst into a swirling vortex of all work and no nookie.

Ragnar Beer of the University of Göttingen surveyed almost 32,000 men and women for his Theratalk Project, which has found that the less sex you have, the more work you seek. Indeed, the sexually deprived have to find outlets for their frustrations: they often take on more commitments and work.

And, to make matters worse for sexless workaholics, the extra work cuts into their would-be sex time. "Sexual frustration prevents you from being able to reduce your stress," Beer observes. In other words, no sex leads to even less sex.

"One commonly takes on obligations out of sexual frustration that aren't easy to let go of, like leadership positions in a club, for instance. That takes away from the time spent on the relationship, which again negatively contributes to sexual satisfaction. Unobserved, the frustration often becomes deeply ingrained," Beer observes.