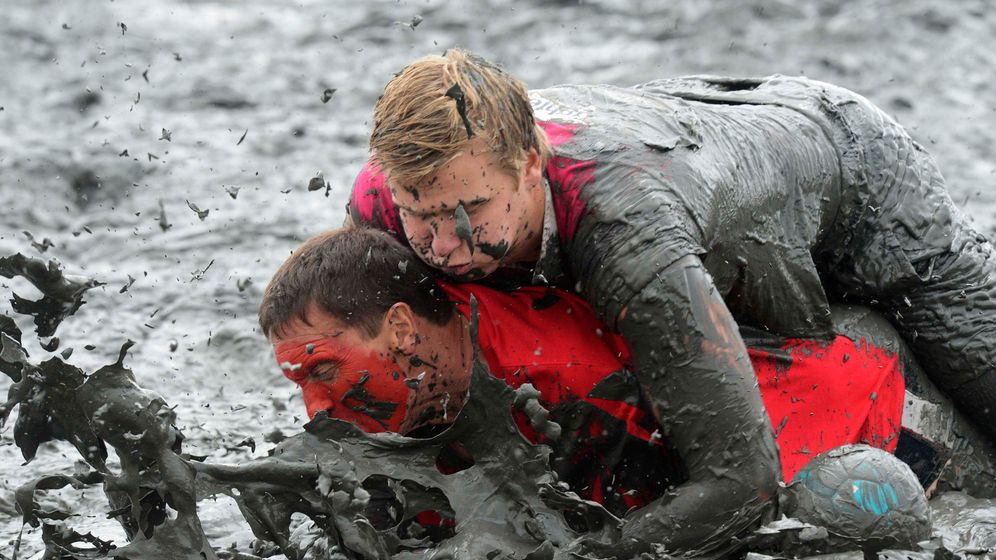 Germany has experienced a difficult start to this year's Olympics in London. Whereas a whole host of countries not exactly known for their sporting prowess have struck gold, silver or bronze, Germany has so far been shut out. The country's press is in full hand-wringing mode.

On Sunday, however, a handfull of frustrated sports fans took out their aggravation by participating in another kind of Olympics -- the so-called "Wattolympiade" staged in the thick, sticky, black mud of northern Germany's "Wattenmeer," a UNESCO protected intertidal zone at the mouth of the Elbe River.

Mud football, mud handball and mud volleyball were a few of the events that 300 athletes from across Europe took part in during the contest. Still, it was a poor substitute. After all, as Oliver Kumbartzky, the master of ceremonies, told the German news agency dapd, skill wasn't even a requirement. "You don't need that here," he said. Spirit is more important.

Events also include distinctly off-beat imitations of their Olympic cousins. In the relay race, for example, athletes were forced to hand off a fake eel instead of a baton. This year organizers also introduced a race using sleds built to get across the mud flats.

Aside from fun, the annual mud olympics also raise money for charity. Under the motto, "Dirty sports for a good cause," admittance fees go to a local hospital that provides counseling for cancer patients. Since the event was founded 2004 by a local artist it has raised €150,000 ($183,000), according to the event website.

Torsten Albig, governor of the state of Schleswig-Holstein, where the event is located, opened the event. When asked if he would consider taking part, however, his reply was guarded. "Considering my weight," he told dapd, "I would be afraid of sinking into the mud."