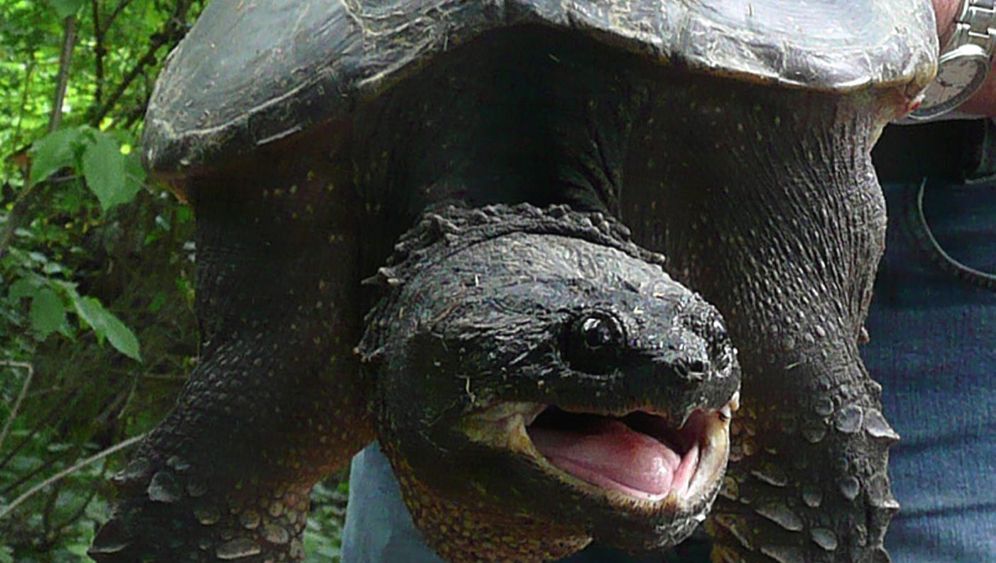 Photo Gallery: 'Monster' Turtle on the Loose in Bavaria

The mayor of the Bavarian village of Irsee has promised a reward of €1,000 ($1,330) to anyone who catches a vicious snapping turtle that bit an eight-year-old boy in the heel last Monday while he was swimming in a lake.

Young Andreas from Bonn, who was on holiday with his parents, was taken to hospital and operated on because the bite severed his Achilles tendon. He has to wear a plaster cast for seven weeks. But he showed true character by telling the authorities: "Please don't hurt the turtle. It should be taken to a zoo."

The ambulance crew thought he had stepped on a piece of broken glass, but they were puzzled by the extent of the bleeding and the pain it caused. After he was treated, the boy's doctor told the local authority that it could only have come from a bite.

The local pikes, experts said, aren't mean enough or big enough to cause such an injury. So photos of the wound were sent to the Zoological Institute in Munich. The alarming answer came back on Thursday: The culprit was most likely an alligator snapping turtle or a common snapping turtle from the US or Canada.

A Summer Routine of 'Jaws'-Like Incidents

Alligator turtles are carnivorous, can weigh up to 80 kilograms, and according to Wikipedia, "will eat almost anything they can catch." Common snapping turtles aren't much better.

Neither is indigenous to Germany, meaning that the animal in the lake near Irsee is likely to be an exotic pet released into the wild by its owner after it got too big to handle.

That's a common problem, and leads to frequent "Jaws"-like panics in lakes each summer, much to the annoyance of bathers and authorities, but to the delight of media scraping around for stories during the slow news season. If it's not a snapping turtle, it's an alligator or a crocodile. Even the sighting of something looking like a crocodile will suffice to trigger copious media coverage.

The zoologists' warning hit Irsee like a bombshell and has made the national news. The lake was closed to bathers on Thursday and the unseen turtle was swiftly named "Lotti" -- a little too endearing, perhaps, given the animal's aggressive nature.

The fire department searched for Lotti in vain over the weekend. Mayor Andreas Lieb, clearly not someone who does things by halves, ordered the lake to be drained in the hunt: 20 million liters of water were pumped out of it, and all the fish -- 1.5 tons of them -- were moved to a neighboring lake.

If Lotti has any brains, that's where she'll be right now.

"Whoever presents me with the turtle alive will get €1,000 from the municipal funds," Lieb told the tabloid Bild. But he warned against approaching Lotti. "It's enough if the finder shows us where the turtle is."

The lake will remain empty until next March if the animal isn't caught.

SPIEGEL ONLINE couldn't immediately reach Lieb for further comment on Monday. His phone was constantly engaged -- an indication that the hunt for Lotti is likely to keep generating headlines.