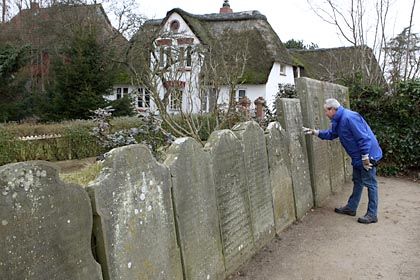 A man inspects the "speaking stones" of Amrum.

Seagulls screech overhead and a rank smell wafts over the tiny German North Sea island of Amrum as pastor Friederike Heinecke steps into her graveyard.

Ornately decorated stone slabs with long inscriptions tower into the Frisian air. Some of the tombstones are two meters (6.5 ft.) high and weigh over 800 kilos (1,760 lbs).

A total of 91 of these colossal blocks, called the "speaking stones" of Amrum, stand in the island village of Nebel near the whitewashed church of Saint Clemence. The headstones are protected as historic monuments.

Upon close examination, the damage becomes evident. Slimy moss flourishes on many of the gravestones. "But the crustose lichens do the most harm," says the pastor. They cling so tightly to the stones that "when you tear them off, the letters break off as well."

The stones are up to 400 years old and belong to a unique burial tradition. Since Amrum's poor sandy soil produces only meager crops, the island's inhabitants sought their fortune at sea. On board towering three-masters they set sail for Batavia in what is today Indonesia, purchased grain in America and rounded Cape Horn in large cargo vessels. Many of these intrepid sailors rose through the ranks to become captains.

Back home, the rich seafarers lavished elaborate funereal finery on their tombs. Sandstone was shipped from the distant Weser Mountains and decorated with brigs, rowboats and sloops. Entire life stories are emblazoned on the headstones. Similar gravestones can be found on the neighboring island of Föhr.

Historian Martin Rheinheimer from the University of Esbjerg in Denmark calls the necropolis a "precious legacy." The biographical information on the graves suggests incest and extremely close kinship ties -- Amrum had barely 600 inhabitants. But more research is needed into this aspect.

The origins of these burial customs -- this much has been confirmed -- date back to the 17th century. This was the heyday of the whaling industry and Amrum eagerly joined the fray. Usually the locals signed on with ships belonging to owners in Amsterdam or Hamburg. Boys barely 12 years old were sent to sea.

Surrounded by water their entire lives, the islanders proved to be talented seamen, and many became harpooners and even ship commanders. In early March, the massive wooden vessels would set sail for the Arctic to hunt whales. Time and again, ships were caught in pack ice and crushed. Entire crews lost their lives. Many sailors drifted on ice floes until they perished.

Captain Nahmen Jürgens met his maker in 1697. During a voyage to Greenland he suffered a fatal stroke. It is unclear how they managed to keep his body from decomposing for weeks on end. He was probably placed in a barrel of rum and shipped back home.

Amrum seafarers who sailed for Asia and America were more likely to come down with malaria or yellow fever. Even the sea at their front doorstep was perilous. In October, 1703, the water-bloated corpse of Peter Jensen drifted ashore. In a separate incident, a neighbor tried to sail to the neighboring island of Föhr -- and sank in a sudden storm.

Such calamities led to a severe decline in the adult male population. A census conducted in 1769 on the island of Föhr (where whaling was also a major industry) lists 214 widows. The gender disparity was only limited to a certain degree because so many women died in childbirth.

The inhabitants of these islands off the coast of Germany -- a quiet and reserved people -- stoically accepted such strokes of fate. Skulls and hourglasses adorn the gravestones of Amrum, which include such lumbering verses as I am headed for heavens door, where I shall find peace forever more.

According to author and researcher Georg Quedens, the Frisian vocabulary is conspicuously poor with regard to psychological, emotional and religious notions. In other words: too plain.

Of Turkish Pirates and Slave Trading

Although the isle never produced painters or poets, it was the starting point for many adventures. Perhaps the most thrilling exploit of all was experienced by Hark Olufs, a cabin boy who fell into the clutches of Turkish pirates in 1724. He was sold on the slave market of Algiers.

This was not uncommon. At the time, the Barbary States of North Africa were conducting large-scale raids on the seaborne commerce of Christian nations. "I am beaten black and blue every day," complained a prisoner from the German town of Lübeck.

Olufs from Amrum did much better. He prayed to Allah and obediently cared for his masters mulberry tree. And he calmly endured the cutting of his foreskin. Afterwards, he rose from lackey to become the treasurer of the bey of Constantine and commander-in-chief of his cavalry.

Twelve years later, Olufs sailed back to his homeland and returned to the Christian faith.

But the darkest chapter in the history of Amrum remains the islands links to the slave trade. Historians have discovered clues on the gravestones that point to this dirty business. The key piece of evidence is a 1.45-meter-high beautifully carved slab. It belongs to Harck Nickelsen, who died in 1770, and presents himself on his gravestone as a "noble captain."

Utter nonsense: Old logbooks and ship journals that Rheinheimer has dug up now prove that the "good captain" dealt in human goods.

According to the historians reconstructions, at the age of 18, Nickelsen fell into the hands of Turkish corsairs. Later, a ransom was paid for his freedom and he signed on with a Danish company and pursued a profitable business buying and selling Africans.

First, the captain would set sail for West Africa where he bartered with tribal chiefs -- trading cheap spirits and weapons for slave laborers. With roughly 400 natives chained below deck, he then sailed to the Caribbean, where he took on a load of sugar for Europe. He earned his fortune through this triangular trade.

Rheinheimer suspects that there may be more slave traders concealed among the cemeterys dead. But testing his hypothesis will be increasingly difficult -- due to the annoying growth on the stones. "It would have been enough to scrub the gravestones once a year with warm water," says Frank Hansen, a building official, "but now extensive conservation measures are necessary."

What should be done? First the church purchased a building to protect the stones from the elements. However, this solution was rejected by the historical preservation office in the mainland city of Kiel. An experts report calls for a special cleaning.

But that costs a lot of money. The latest proposal calls for the memorial stones to be buried in the ground. It is hoped that bacteria in the soil will gently nibble away at the moss and the lichen.