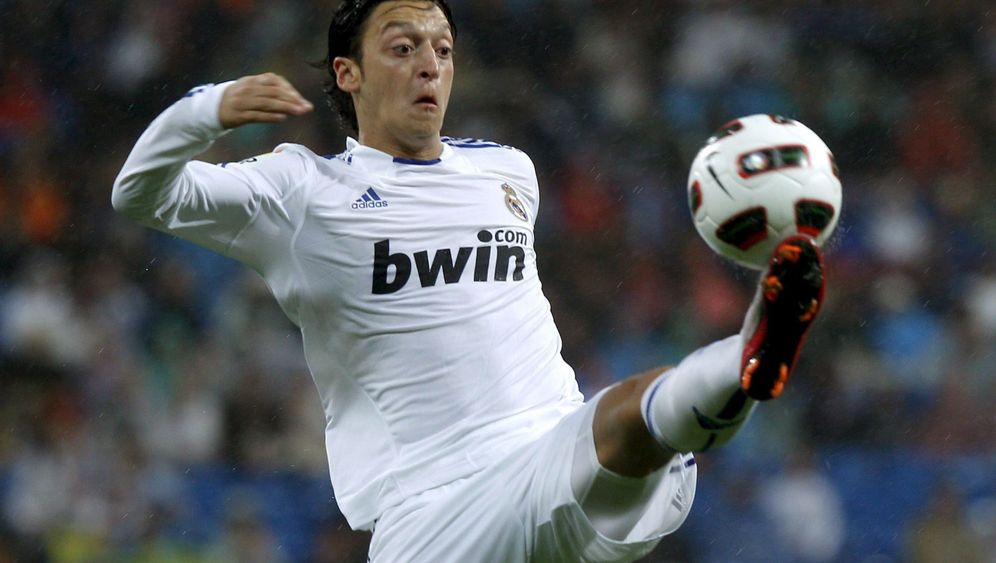 Someone had come up with the idea of placing life-sized cardboard figures of the members of the German national football team in the room ahead of the press conference. And with Germany preparing to take on Turkey on Friday in a qualifying match for the 2012 European Championships, it was little surprise that the figure of Mesut Özil, a German player with Turkish roots, was placed front and center.

The real Mesut Özil, though, would likely feel somewhat uncomfortable being pushed forward like that, standing unprotected in the public eye. Indeed, Wednesday's press conference, attended by 100 journalists, seemed to be as big a challenge for the 21-year-old football star as any World Cup final.

There is a lot going on in Özil's life at the moment. The young man is expected to play a central role in his new club, Real Madrid, one of the top teams in the world. He had already attracted the attention of the public during his performance at the World Cup in South Africa this summer and the German Football Federation (DFB) said on Wednesday that he has seen the biggest increase in popularity of all the national players. Now, ahead of the European Championship qualifying match against Turkey, he is being presented as a role model for successful integration in Germany. Quite a burden for a young man who is only just learning how to deal with the media.

'I Cannot Support Him'

The DFB's media director, Harald Stenger, revealed on Wednesday that Özil had received an "unbelievable amount of interview requests" ahead of Friday's game. Germany against Turkey -- it is a game that puts Özil firmly in the spotlight. It was only in 2009 that he finally decided to play for Germany, the land of his birth, rather than Turkey, where his grandparents emigrated from. Many back in Turkey still find that decision difficult to swallow even if Özil now says that "I only hear positive things from Turkey, everyone supports me."

Bayern Munich's Hamit Altintop, though, is not one of them. Like Özil, Altintop grew up in Germany's industrial Ruhr region, but he will be playing for Turkey on Friday. In an interview with Munich's Süddeutsche Zeitung newspaper on Wednesday, Altintop said, "I am a tolerant person and I respect Mesul's path but I cannot support him." Altintop argued that Özil had more sway as a German national player, a higher market value and earns more money. "That has nothing to do with integration," he said.

Such a position does not fit well with the image the DFB would like to portray. The German team's manager Oliver Bierhoff instead paints a picture in which "Mesut Özil, a devout Muslim of Turkish origin, hugs Cacau, a devout Christian with Brazilian roots. That is a symbol for integration, as it is lived by us." Bierhoff also likes to mention that it was no problem to fulfil Özil's wish to find a mosque during the team's stay in South Africa. The fact that 11 of the 23 members of the World Cup squad had a migration background shows that the national squad stands for "openness to the world," Bierhoff says.

Özil had little to add to that assessment, merely saying that "I don't know of a better example for integration that the DFB." Even when he was playing for the youth teams "we were all a bit multicultural," he said, adding that he was "very proud" to be playing for Germany and that there was "never any question of another country."

He said he was particularly happy to be playing against Turkey: "I will be playing against my friends. It will simply be nice." He realizes that he has been chosen as a role model for young boys with a Turkish background living in Germany. "I am somehow an example of integration."

Team captain Philipp Lahm, sitting next to Özil and Bierhoff on the podium, then comfortably answered the journalists' questions, making sure to flash his trademark smile at all the right moments. Özil on the other hand came across as shy, not at all like a man who is one of Europe's soaring football stars, and who at Real Madrid works together with super egos like Cristiano Ronaldo and manager José Mourinho.

Özil was then asked if he might have to take on a more central role on the field on Friday now that Bastian Schweinsteiger is injured. The midfielder from Real Madrid pointed immediately to his team mate Sami Khedira saying, "he will certainly be taking on more responsibility now." As for Özil himself, "I'm more of a quiet guy."