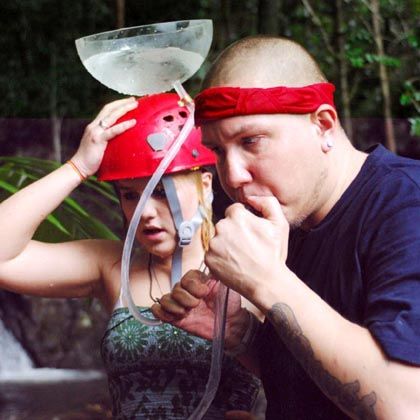 One of the contestants in Germany's version of the reality TV show "I'm a Celebrity ... Get Me Out of Here" has been thrown out for making a Hitler salute and singing "Deutschland, Deutschland Über Alles".

TV station channel RTL, which runs the show set in an Australian jungle camp, decided to evict Polish-born disc jockey DJ Tomekk, 31, after Bild newspaper reported that he was filmed making the salute in his Australian hotel shortly before the team left for the jungle. After he finished singing he said: "So many foreigners in this building," according to Bild, which saw the video.

The tabloid newspaper published a still shot from the video on its front page on Wednesday. It shows DJ Tomekk, whose real name is Tomasz Kuklicz, making the salute, apparently as a joke. "These are serious accusations against DJ Tomekk," said RTL spokesman Christian Körner. "Such behavior is not tolerable for RTL."

DJ Tomekk said: "I haven't seen the video and don't know what's on it. I heard from a third person that a Hitler salute can apparently be seen on it. I can't explain that at all at the moment. Especially not as something that was meant seriously."

Making the Hitler salute is illegal in Germany but as DJ Tomekk was on Australian soil, he's unlikely to get in legal trouble. The lyric "Deutschland Über Alles" was dropped from Germany's official national anthem after World War II.

DJ Tomekk said he isn't xenophobic. "I grew up in Wedding, that's a Berlin district with a way above average proportion of foreigners. My girlfriend is black and I'm anything but xenophobic."

The show puts contestants through a variety of trials that include eating a kangeroo's testicle.