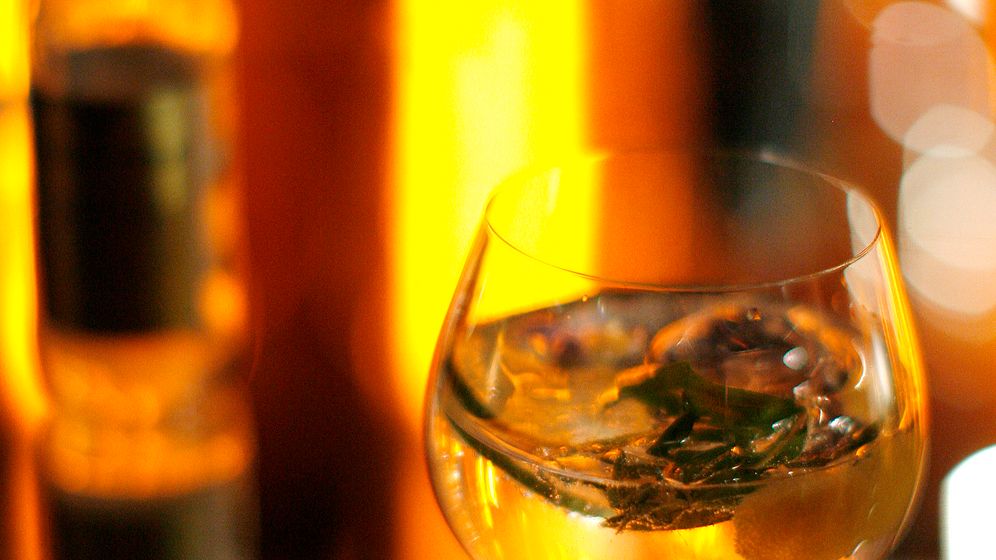 Photo Gallery: Gin Is (Back) In

A man walks into a bar and orders a Gin and Tonic. In the past, that might have been the opening line of a joke. But, today, it could just as easily mark the start of an evening in which, if he isn't careful, the man might end up making a fool of himself.

"Which gin?" any discerning bartender will ask him. "With which tonic?"

And, of course, the bartender could also simply reveal the customer's lack of savvy in a subtler way. Ordering the drink in the way it's traditionally been done in Germany -- by calling it a "gin tonic" -- betrays the drinker's lack of refinement, and the subtly superior bartender may respond by emphasizing the drink's name in the original English: "And how would you like your Gin AND Tonic?"

"Just ordering a normal Gin and Tonic is hardly even an option anymore," says Uwe Voigt, owner and founder of Germany's oldest bartending school, in the northern German port city of Rostock.

"Five years ago, no one ordering from me asked for a Gin and Tonic with a specific gin or a specific tonic," says Oliver Ebert, who owns a bar in Berlin called Becketts Kopf. "Now that's standard." A knowledgeable bar patron might ask for the aromatic Monkey 47 gin to be paired with a light 1724 tonic water, which won't drown out its flavor. A Sipsmith gin, though, would go well with a Fentimans tonic, while an Adler gin might be served with a Thomas Henry.

Indeed, just going into a bar has become a science in itself. While it would be easy to dismiss this attention to detail as fleeting foolishness, it can just as easily be celebrated as a drinking culture that is not only about intoxication, but also about enjoyment.

And front and center in this culture of enjoyment is a renaissance of gin.

Blogs by experts and industry journals have taken up extolling this new trend in the world of alcohol distillation. "More and more distillers are fired up about gin," one notes. "Gin is in the mix again," says another, or "Gin is on everyone's lips."

That seems like reason enough to take a closer look at this juniper-flavored spirit -- especially at a time of year when juniper berries are used to season venison for holiday meals, sprigs of juniper adorn Christmas wreaths and, in some places, junipers even serve as Christmas trees. One might even call gin a Christmas decoration in liquid form.

The base ingredient for any gin is a high-percentage alcohol derived from either grain or, less often, molasses. Along with the juniper berries that give the drink its signature flavor, a gin recipe can include other herbs, spices and fruits -- such as cilantro, ginger or orange rind -- to lend each gin its own unique flavor. After a second distillation process, water is added to reduce the spirit to a drinkable concentration. Gin must contain a minimum of 37.5 percent alcohol, but in most cases it falls between 40 and 47 percent.

The national drink of England actually has its roots in the Netherlands, where it was known as genever or jenever -- Dutch for juniper. In the 17th century, English soldiers who fought alongside the Dutch against the Spanish in the Eighty Years' War (also known as the Dutch War of Independence) brought the drink back home with them, giving it a name easier for the British tongue to pronounce: gin.

The drink came very much into fashion when Dutch prince William III of Orange ascended to the English throne in 1689. Thanks to a succession of deregulations to distillation laws, by 1736, gin production exceeded beer production by a factor of six. The result: a country in its cups, a pickled people.

By some two centuries later, the poor man's swill had become a high-quality spirit especially beloved among officers. Those stationed in the British colonies used gin to wash down the bitter quinine powder they took to guard against malaria, along with their daily ration of lemon juice that staved off scurvy. In doing so, they created the basis for today's Gin and Tonic (gin mixed with quinine water) and Gin Fizz (gin with lemon juice, sugar syrup and carbonated water).

During the heyday of the American bar scene, between 1870 and 1920, these drinks became classics, along with other gin drinks such as the Gimlet (gin and lime juice), the Negroni (gin, sweet vermouth and bitters) and, of course, that king of cocktails: the Martini (gin and dry vermouth). Simply stated, cocktail culture was synonymous with gin culture.

But that culture was destined to fall -- drowned in vodka.

"I have a whole pile of old bartending books from the years 1868 to 1940. And, in all of these old books, there isn't a single recipe using vodka," says Karsten Sgominsky, head bartender at the upscale Munich restaurant Les Deux and author of a book on gin recently published by Gastrosuisse, a Swiss association for the hospitality industry. "Vodka didn't come into fashion until Smirnoff began marketing it," Sgominsky explains.

That company invented the Moscow Mule (vodka, lime juice and ginger beer) in 1941 as a way to boost its sales in the United States. It turned out to be a brilliant idea, quickly followed by advertising campaigns featuring Hollywood stars, such as Zsa Zsa Gabor and Woody Allen.

Gin's fate was sealed, though, when another legend of popular culture made vodka his drink of choice: From the very first James Bond movie, 1962's "Dr. No," the secret agent famously drank his martini "shaken, not stirred" -- but, more importantly, he drank it with vodka instead of gin. "A Smirnoff bottle can be clearly seen in the background of many Bond films," Sgominsky points out.

Over the next decades, more and more exotic juices and syrups came to be paired with vodka. As cocktails became an ever more eye-catching and flashy mishmash of ingredients, vodka's neutral flavor made it well suited to everything. There was no room left on the bar shelf for gin.

Now, though, gin is reclaiming that space. Five years ago, liquor wholesaler Bley und Bley, which supplies restaurants in northern Germany, had 20 types of gin in its permanent product range. Today, it has 60. Food retailers' sales of gin, and the related liquor genever, have also increased (for example, by 9.3 percent between 2010 and 2011). That's not yet exactly a widespread phenomenon, seeing that some 5.5 million bottles of gin are little compared to 63 million bottles of vodka. Nevertheless, at the trendiest bars, the motto has long since become: Are you out, or are you gin?

"When I started at Schumann's in the late 1980s, we had four or five types of gin, and we were already well-stocked with those," says Stefan Gabányi. Until recently head bartender at Schumann's, a long-standing bar in Munich, Gabányi opened his own upscale watering hole this August, Bar Gabányi. "Now I have 20 different types of gin," the expert mixologist says.

And that's not even all that many. Jörg Meyer, another star of the bartending world, keeps about 80 different gins at his Hamburg bar, Le Lion, and half the drinks on his cocktail menu feature the juniper-flavored liquor.

So why is gin suddenly all the craze again? The fact is that gin is in fashion because classic bar culture is in fashion, with bartenders hunting down old recipes and bar patrons ordering old drinks.

The gin renaissance fits in with a broader wave of retro fever sweeping through popular culture. If vodka was the alcohol of the 1980s, the spiritual brother of cocaine, as cold and garish as a neon light, then gin is the alcohol of the 2010s, a drink for a nostalgic new millennium. If vodka was the Ferrari among liquors, then gin is the Jaguar, better suited to a decade where class differences have grown harsher and a fear of decline has taken hold of the middle class.

Indeed, social distinctions have now come to seem important even when out boozing. In the 1980s, people drank to get drunk, but they didn't particularly want to taste the alcohol itself, so they mixed it into sickly sweet cocktails of vodka and fruit, forerunners of today's "alcopop" mixtures. Now, in the 2010s, people go to fancy bars to drink classic cocktails mixed from exquisite ingredients. These drinks are smaller, their flavors more concentrated, they weigh more heavily on the tongue. And they have gin as their base.

"No self-respecting bartender relies on vodka," adds Gabányi in Munich. "You can't go wrong with vodka, because it offers no resistance."

An Explosion in Niche Brands

In other words, not just bar patrons but bartenders as well have come to value these distinctions -- and that, in turn, is prompting gin producers to create ever more new concoctions with their product.

The first trailblazer in this trend was Bombay Sapphire, a Bacardi product introduced onto the market in 1987 in distinctive, light-blue bottles. It was followed in 1999 by Hendrick's Gin, a cucumber-infused gin produced by long-standing Scottish distiller William Grant & Sons, otherwise known for whiskies such as Glenfiddich.

Both these gins are now bar standards, basics that everyone can agree on. But, for the last three or four years, they've also seen their ranks swell with an increasing number of specialized niche products. There's Gin Mare, which hails from a Catalonian fishing village and owes its Mediterranean flavor primarily to the thyme, rosemary, basil and green Arbequina olives it incorporates. Then there's Sipsmith Gin, distilled in London's Hammersmith district by two friends operating out of a garage, using water from a spring that is one of the sources of the Thames.

Even Germany can suddenly boast its own premium gins. At the Preussische Spirituosen Manufaktur (Prussian Spirits Manufactory) in Berlin, microbiology professor Ulf Stahl and restaurateur Gerald Schroff hand-produce the very mild and lightly lemony Adler Gin, while in Munich's Maxvorstadt district, near the city's university, historians Daniel Schönecker and Maximilian Schauerte have concocted the certified-organic Duke Gin, which owes its light note in part to hops and malt, and is named after German duke Henry the Lion, Munich's founder.

But the king of all gins comes from the Black Forest in southern Germany: Monkey 47, crowned last year as the world's best gin. Former art book publisher Christoph Keller and erstwhile Nokia executive Alexander Stein bring together 47 different herbs, spices and fruits in a brown apothecary-style bottle with a label design that evokes a Victorian-era postage stamp. Gin memoriam.

Part of the Revolt against Mass Production

These new niche gins also work well in an era when local food products are very much in demand. About a third of the ingredients that go into Monkey 47, for example, come directly from the Black Forest, including spruce, elderflowers and lingonberries. These gins also owe their popularity to the fact that many are revolting against mass production, whether it has to do with furniture to fashion. Being labeled "handmade" is the best label a product can bear.

Gin has also been an easy way for liquor producers to get on board this trend. "Gin can be produced quickly," explains bartending school proprietor Voigt. "You can have a new gin on the market within a couple of weeks, while a new whiskey first needs to spend at least three years in a barrel."

In addition to the time factor, there's also the creativity factor: A whiskey gets its distinctive flavor from the way it's stored, while a gin's flavor is something that is composed. Gin offers producers the chance to let their imaginations run wild.

One could even say it's a gin-gin situation.