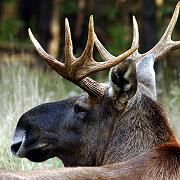 Now poor moose are being blamed for global warming.

Norway is concerned that its national animal, the moose, is harming the climate by emitting an estimated 2,100 kilos of carbon dioxide a year through its belching and farting.

Norwegian newspapers, citing research from Norway's technical university, said a motorist would have to drive 13,000 kilometers in a car to emit as much CO2 as a moose does in a year.

Bacteria in a moose's stomach create methane gas which is considered even more destructive to the environment than carbon dioxide gas. Cows pose the same problem.

Norway has some 120,000 moose but an estimated 35,000 are expected to be killed in this year's moose hunting season, which starts on September 25, Norwegian newspaper VG reported.