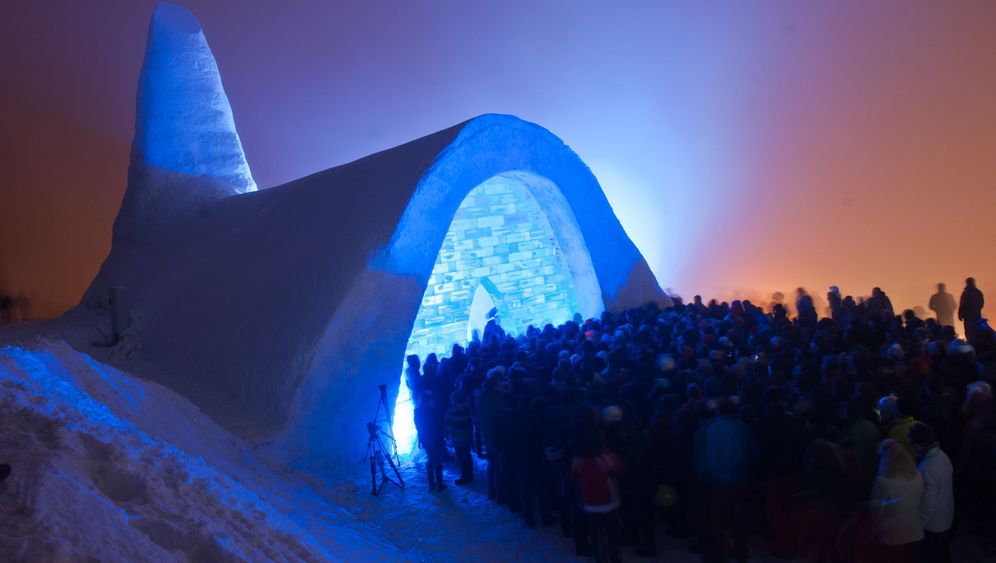 Photo Gallery: A Church Out of Snow

One hundred years ago, the residents of (and let's see if you can say this in a single breath) Mitterfirmiansreut built a church out of snow in protest. A trip to Sunday mass for the people in the mountain village meant a 90-minute trek to the neighboring town of Mauth. When their pleas for a church to be built in their own town were rejected, they responded by building their own out of snow and ice.

To commemorate those events a century later, Mitterfirmiansreut residents have rebuilt their famous snow church. On Wednesday night, Catholic Church Dean Kajetan Steinbeisser blessed the temporary church, which was bathed in the glow of blue light. The church, which one prominent German newspaper has dubbed "God's Igloo," is more than 20 meters (65 feet) in length and also includes its own 19-meter-high tower. It has been built using 1,400 cubic meters (49,000 cubic feet) of snow as well as slabs of ice.

Residents of the village rebuilt the church at an estimated cost of €100,000 (€130,000) according to plans by Passau-based architect Alfons Doeringer. Originally, the village had hoped to open the church in time for Christmas, but a dearth of snow and unseasonably warm weather in Bavaria slowed construction by close to two weeks. It is possible to visit the church, which can hold up to 200 people at a time, and a number of cultural and religious events are planned between now and March.

Although worship services will be held, the Catholic bishop of Passau, Wilhelm Schraml, has ruled out any masses, baptisms or weddings from being held at the church for theological reasons, the religious radio station Münchner Kirchenradio is reporting.

10 Bilder Photo Gallery: A Church Out of Snow