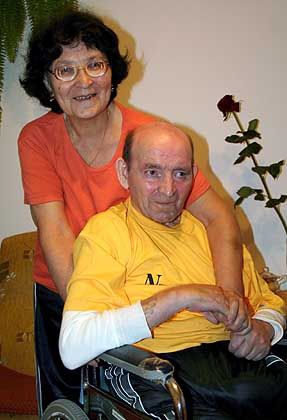 Polish railway worker Jan Grzebski fell into a coma after being knocked over by a railcar in 1988 -- one year before the fall of Communisim. His doctors didn't give him long to live.

They were wrong. While machines kept him alive, Socialist Poland died outside on the streets. He didn't see the fences and walls come down, missed the collapse and subsequent rebirth of Poland's economy, as well as the country joining NATO and then the European Union.

He awoke on April 12 of this year to a world of democracy and consumerism after spending 19 years in the selfless and devoted care of his wife Gertruda.

"When I went into a coma there was only tea and vinegar in the shops, meat was rationed and huge petrol queues were everywhere," Grzebski, still wheelchair-bound, told Polish media in interviews broadcast on Saturday.

"There are so many goods in the shops it makes my head spin.

Gertruda had refused to believe the doctors who said he would never regain consciousness. "He couldn't move his legs or hands, he couldn't hold up his head," she told the TVN24 channel. "He was a living corpse."

But she could sense his will to live. "I always got angry when someone said people like him should get euthanasia. I had faith that Jan would recover." She noticed last year that her husband started trying to speak. He was taken back to hospital and awoke from his coma two months ago.

"His speech wasn't clear at first, now it's improving day by day," said Grzebski's doctor Wojciech Pstragoswki. "He can move his feet now, the feeling has returned to his limbs and he can hold light objects. I'm sure the patient wouldn't have reached this good condition without the devotion of his wife."

"It was Gertruda who saved me, and I'll never forget it," said Grzebski, now getting to know his family which has grown considerably since his accident. His four children are all married and have provided him with 11 grandchildren.

"What amazes me today is all these people who walk around with their mobile phones and never stop moaning," said Mr Grzebski. "I've got nothing to complain about."

The case evokes the 2003 German hit movie "Goodbye Lenin" in which an East Berlin woman goes into a coma before the fall of the Berlin Wall. She awakes after it has come down, and her son shields his weakened, bed-ridden mother from the shock of how history has changed by creating the illusion that it hasn't.