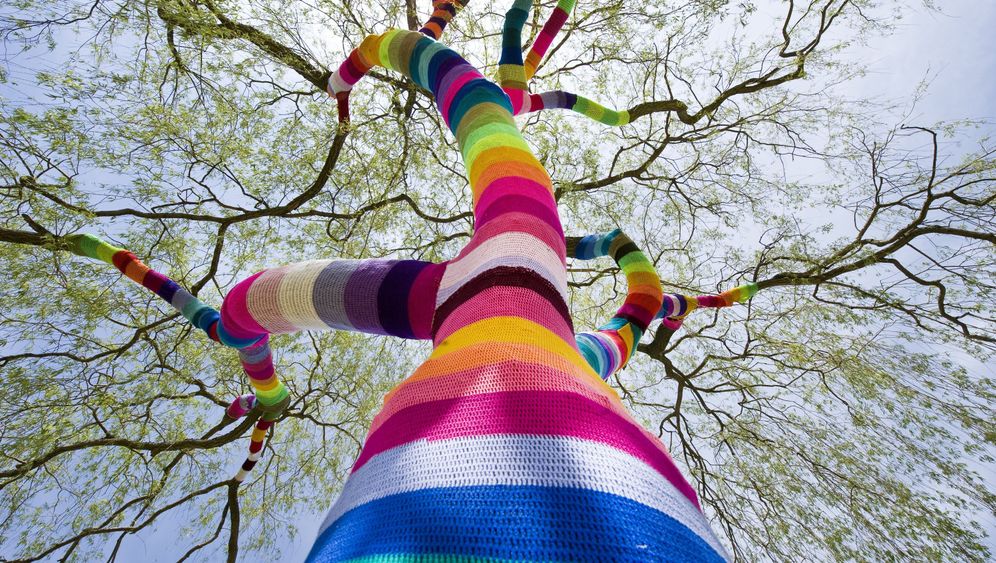 In the North Rhine-Westphalian town of Velbert, a weeping willow looks much cheerier than its name suggests. It's wearing a rainbow sweater. Rings of multi-colored yarn hug the trunk, giving it the look of a giant package of plush Lifesavers. The vibrant tree is the work of Ute Lennartz-Lembeck, one among the world's growing ranks of knitting guerrillas and founder of the German knitting graffiti group B-Arbeiten. The 50-year-old art teacher took up the hobby, also known as "yarnbombing" and "yarnstorming," after seeing the work of others on a visit to Berlin.

Graffiti knitters typically install their stitched creations on signposts, statues, bicycles and any other surface that can serve as a creative display space. And just like graffiti of a more permanent kind, their work can be politically-motivated, whimsical, witty or inane. Though they commonly call themselves graffiti or guerilla knitters, some of their works -- like the Velbert tree -- are actually crochet. Lennartz-Lembeck was so inspired by the cozy urban art she saw in Berlin that she decided to import the concept from the capital to her hometown of Remscheid and beyond -- but her projects incorporate language too.

"It's about words and art, putting art in an open space and not necessarily a museum," she says of B-Arbeiten's work. The group, whose name is a play on the German word "bearbeiten," which means to edit or alter, revises city streets with their colourful creations in hopes of getting passers-by to reconsider their surroundings.

Armed with her knitting needles, Lennartz-Lembeck aims to return significance to words representing values that "we are all familiar with but that have become little more than meaningless shells." The German word for courage, "Mut," is stitched on one of her signs. On the sidewalks of Cologne, pedestrians are confronted with the word "Idee" (idea) hanging on a lamppost. "Raum" (space) reads another sign, hanging on a pole by a deserted lake.

Unlike some knitting guerrillas who follow the lead of traditional graffiti artists like Banksy and keep their identities secret, Lennartz-Lembeck has taken on the role of yarnbombing ambassador, installing her creations openly and during the daytime, which often spurs conversation with curious strangers.

Over the last several years knitting has evolved from a grandmotherly hobby to a trendy diversion, but American Magda Sayeg is commonly credited with taking the trend to the streets as the creator of the yarnbombing movement in 2005. Within a few years the Houston, Texas resident had a large enough "granny graffiti" following to create her own crew of yarnbombers, who called themselves Knitta Please.

Other groups have emerged around the world, including in Germany, with outfits like the Katernberger Strickguerilla in Essen and the Dortmund-based Strick & Liesel. The Dortmund duo has already made headlines by using knitting to protest nuclear power, a controversial topic in the country. Their project, called "Fluffy Throw-up," involves knitting yellow-and-black radioactive warning signs onto everything from tree trunks to street lamps.

While Lennartz-Lembeck's goals don't mirror the more subversive yarnstormers like Strick & Liesel, she does say that social and political questions always play a role in her work. "I understand it as a means of disruption, even though it's done in an affectionate way," she explains.

Her bigger pieces take weeks of work. The tree sweater in Velbert, for example, required 200 hours and 400,000 stitches to complete. But much of her work, like the single-word pieces, is more compact and easily shipped abroad for installation. Since she began in 2010, Lennartz-Lembeck has sent 162 works to 32 cities in eight countries around the world. But what makes them special is her use of each country's native language -- even the tags she attaches with information on their origin are translated accordingly.

A bright-yellow knit sign proclaiming "Futuro," the Spanish word for future, found a new home in Spain. One of her knit flowers can be seen hanging from a tree in Haiti, where it was sent after the country's devastating 2010 earthquake. Meanwhile she's expecting photos of a new installation after a recent shipment to France, while four other pieces were just mailed to the US. Belarus and Iceland are next, she says.

"Besides that I'm finishing entire sentences. In the long-run there will be a story," Lennartz-Lembeck told SPIEGEL ONLINE. "The project is constantly changing and growing."