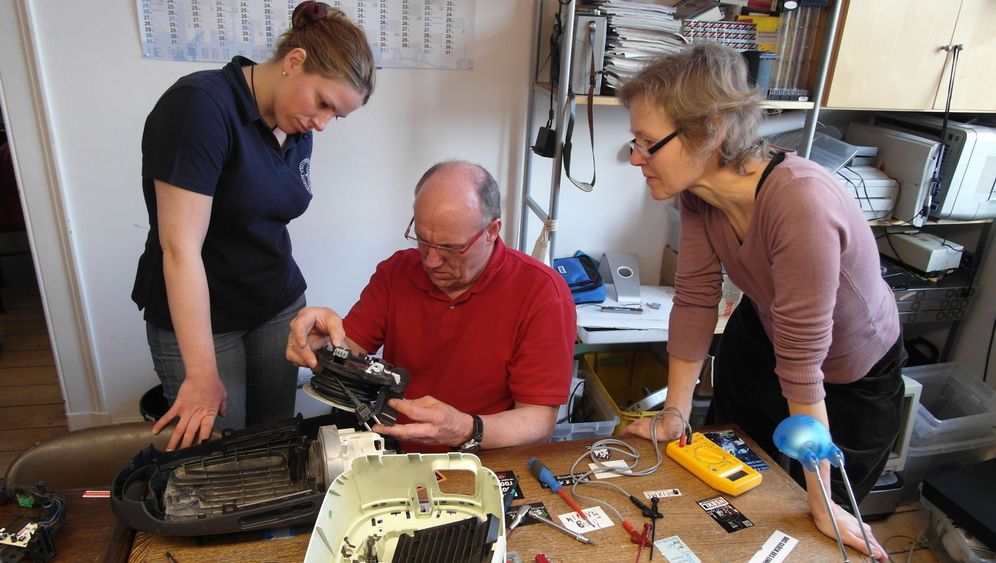 A broken vacuum cleaner is sprawled out on the lab's operating table. Five very bright people circle around it -- but not one of them knows what to do. They are IT specialists or electricians, and there's even an anesthesiologist. The machine has been manufactured by a well-known and respected German company. But some lives are short, and this vacuum cleaner simply won't turn on anymore. Instead of dumping it, the hackers and do-it-yourselfers are supposed to fix it.

The problem is: They can't pinpoint the problem.

A couple has brought the vacuum cleaner to the so-called hackerspace with the cumbersome name "/dev/tal". The group's headquarters in a former train station in the western German city of Wuppertal is usually populated by software engineers, nerds and tinkerers.

Once a month, the lab invites the neighbors over. They are encouraged to bring their broken appliances to repair them together with the group instead of throwing them out. Many hacker labs host such repair cafés, and the group from Wuppertal has even gained some fame in the city with theirs. Since they were featured on television, people are lining up outside the old station. A mother has brought her broken VHS player because she believes the old tape format is the only way to go. Another woman has returned from the flea market with an old-fashioned toaster that is no longer working.

'Anesthesiology Is Much Riskier'

The project fits well into an ongoing debate in Germany about "planned obsolescence," an inbuilt expiration date that is supposed to keep the life spans of electric appliances to a minimum. The assumption is that producers are deliberately constructing their products so that they will eventually break down, forcing consumers to replace old with new equipment on a regular basis. And whoever wants to escape this buy-toss-buy cycle can come to places like this historical train station.

Software engineers, mechanics and DIY enthusiasts are waiting for them there. And then there's the highly trained anesthesiologist. Her name is Annika Hanning. She's 30 years old and very interested in technology. "The appliances are already broken, so there's not too much damage you can do," she said. "With anesthesiology, a lot more can go wrong."

But when it comes to the broken vacuum cleaner, Hanning is stumped. A man known here as Didi comes to her aid. Didi is a tall, balding and powerfully built man. He was a soldier for 30 years. But, more importantly, he's an electrician and can fix pretty much everything with a plug. "Companies will not get rich with my help," the 60-year-old says. "I repair everything on my own at home, even my car." When he heard about the repair café on television, he headed there the next day and rolled up his sleeves. He joined the "hackerspace club" and has been helping with the repairs ever since. Just like everyone else here, he's a volunteer.

Didi sits down between a 3-D printer and a Rubik's Cube and opens the vacuum cleaner motor. He fumbles … searches … and suddenly he has found the defect, deep inside the little machine on the overheat switch. He believes that deliberate intent on the part of the manufacturer is to blame for the vacuum cleaner's early demise. "This is a typical case. A connection has broken and I assume that it was designed to do exactly that," he says and takes hold of the soldering rod. "In cases like this, the customer often has only one choice, to replace the entire motor, and that usually costs €100 to €150."

Most people would probably buy a new device because it's much cheaper. But that infuriates Didi. What a waste! It would be so easy to solder it back together. Minutes later, he has accomplished just that. Didi reassembles the motor and plugs the vacuum cleaner in. It starts to roar, coughs up some dust and is back in the game. Just like all the radios, lamps, alarm clocks and toasters that have been "kissed back to life" here, as one visitor puts it.

"It's so wonderful that things like this exist," says Margret Meiners. The 57-year-old has brought an electric device to the hackerspace club for the third time. She also heard about the repair café on television. This time, she brought a broken DVD player and starts to unscrew it right away. "That's something I can do by myself," she says. "I'm a trained motorbike and bicycle mechanic." But for what's inside, she needs help.

That was the actual idea behind the first so-called repair café that opened in the Netherlands and all those that subsequently shot up in several other countries: to help people help themselves. "In reality, it usually turns out quite differently," says Nico Hessler, a member of the hackerspace in Wuppertal. "Most of the time, people help a little and then end up watching." The appliances they bring are too complicated, he explains, adding that it requires too much technical know-how to pinpoint problems in a broken computer.

But, of course, it's also about building bridges. "For us, it's an opportunity to open up to others," Hessler says. "This way, people have a reason to stop by and get to know our hackerspace." The technology buffs' main goal is to do something for their city. For example, in the course of a project, they made data of the city of Wuppertal available to its residents. And they're currently contemplating the launch of a repair café for bicycles.

"We could use a bike mechanic for that," Hessler says before looking over toward Margret Meiners.

"Then just leave us your e-mail address," Hessler says.

"I don't have an e-mail address," she answers and turns to her husband. "But you do, so why don't you give it to them?"

It's a new bridge in the making.