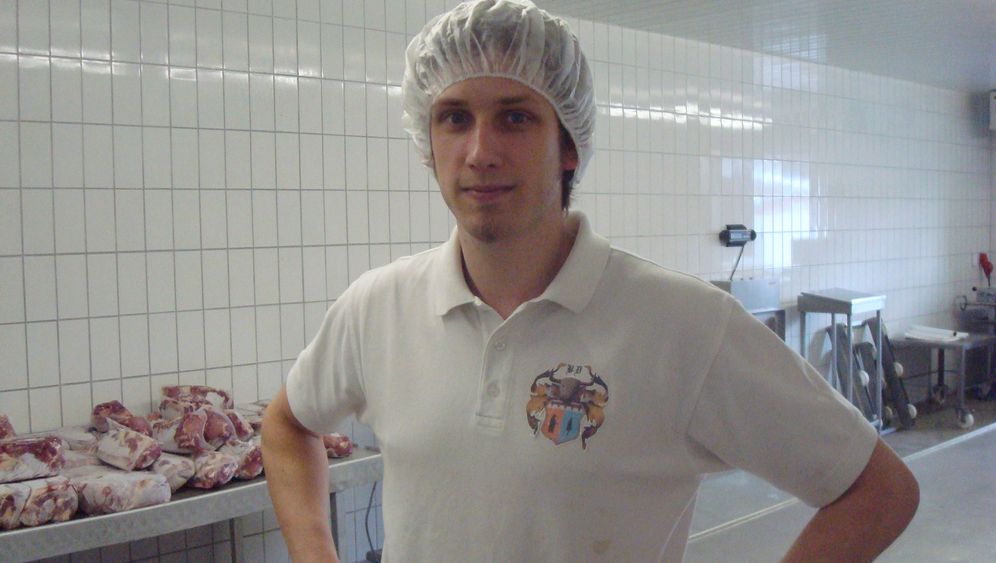 By the city hall subway station in Fürth, three old men stand in front of a small fast-food stand, drinking tea and chatting in Turkish. Behind the sticker-plastered window a young man sharpens two giant knives in front of colossal cones of meat slowly rotating on spits, the makings of that king of fast food in Germany: the döner kebab.

It's a scene that can be witnessed at thousands of similar mini-restaurants across Germany, particularly in Berlin or in the Ruhr Valley. But this one is slightly different. One of the stickers on the window reads: "Quality meat from Bärlein-Denterlein." An age-old Franconian name on a traditional Turkish Imbiss (snack bar)? The incongruity is like finding a Chinese restaurant called "Acropolis."

The name remains a mystery even after a few inquiries. The slaughterhouse is a "Muslim business under Christian operation," it is said. Further investigation leads one to the industrial area of Neustadt, a town 45 minutes northwest of Nuremberg in northern Bavaria. Above an entrance is the firm's insignia: an ornamented ox head. It looks like a logo for any other Teutonic slaughterhouse. But the family business has long earned a large portion of its revenue from Turkish and Kurdish immigrants. Ninety-five percent of the slaughterhouse's business goes to döner kebab stands and Turkish supermarkets in the area.

'The Best Döner in the City'

And the market is continuing to expand. There are more than 15,000 döner stands in Germany, and the kebab has long been one of the country's favorite fast foods. Between 200 and 300 tons of döner meat are produced per day in the county. Many pre-formed cones of meat involve ingredients as questionable as those in an industrial meatball.

But döner is different in middle Franconia, says Alexander Bärlein-Denterlein, the son of the owner. Most Imbiss restaurants layer and season their own meat. "Because of that, a true competition has emerged, and every stand claims that they make the best kebab in the city," he says. So the slaughterhouse delivers only the raw material, which is in high demand in greater Nuremberg, as well as in Neustadt.

Inside the slaughterhouse, there are few clues to that which had just taken place. The walls, which were splattered with blood just hours before, are clinically white. Shimmering steel hooks hang about that had just pulled along lambs, calves and young bulls before they were sliced up. In endless red plastic baskets lie pancakes of ground beef and turkey. A steel machine has recently flattened some poultry thighs.

For Every Slaughtered Animal, a Short Prayer

Musa, who works with Ömer and Osman as butchers in the slaughterhouse, has long finished his day's work. Before he kills an animal, he says a short prayer -- a single one for each animal. Mostly it's the same sentence: "Bismillahi Allahu Akbar" (In the name of Allah, Allah is great).

"Just as Muslim ritual prescribes," says Bärlein-Denterlein. "Many think that the Koran only requires that animals be butchered in a certain way," he says. "But what's important is the prayer toward Mecca. A lot of Muslims don't know that."

Bärlein-Denterlein knows the direction of Mecca from Neustadt. Recently, during Eid al-Adha -- a Muslim holiday commemorating Abraham's willingness to sacrifice his son -- a few customers rolled out their prayer mats in the neighboring garden. Since then, he knows that when you look directly out the slaughterhouse's front door, you look toward Mecca.

Aside from the ritual prayers, the business works for Islamic correctness in other ways. If calves, lambs and cows take their last steps at the Bärlein-Denterlein shop, chicken parts arrive pre-butchered every day at 3 a.m. And the most popular slaughtered meat in Germany -- pork -- is taboo for Muslims, so the business that courts them keeps its distance, too.

Privately, of course, Bärlein-Denterlein lives like most Germans in Franconia. "In our home, everyone eats bratwurst in a roll or sausage for breakfast. Our Muslim employees accept that as well." What they wouldn't accept is for halal meat to come in contact with pork. "That's why we don't slaughter pigs," he says. "One can't entirely rule out that a knife trimming a döner would still have traces of pig's blood."

East Is East, West Is West

Despite such diligence, the Bärlein-Denterleins often straddle two cultures. One day a number of Turkish Muslims appeared in front of the door wanting proof that no pigs were slaughtered on the site. A little later they left satisfied. But there were also German animal-rights activists who harassed the business over cruelty to animals. "Once they were convinced that the animals were anesthetized before the slaughter, they quickly laid down their guns," says Bärlein-Denterlein.

Alexander now calls it a day around noon -- with 10 hours of work behind him. His mother-in-law Christel still has a few hours to go. Orders for the coming day need to be prepared. Christel has turned it into a science: "A snack bar near a school is busiest around midday, one near a disco around three in the morning," she says. "And garlic sauce is not a big seller where businesspeople eat lunch."

On Sundays, the family goes to church. Faith is taken seriously here. Once, a customer joked with Bärlein-Denterlein's father-in-law by asking if he wanted to convert to Islam.

"That's the one thing I won't do," he responded.