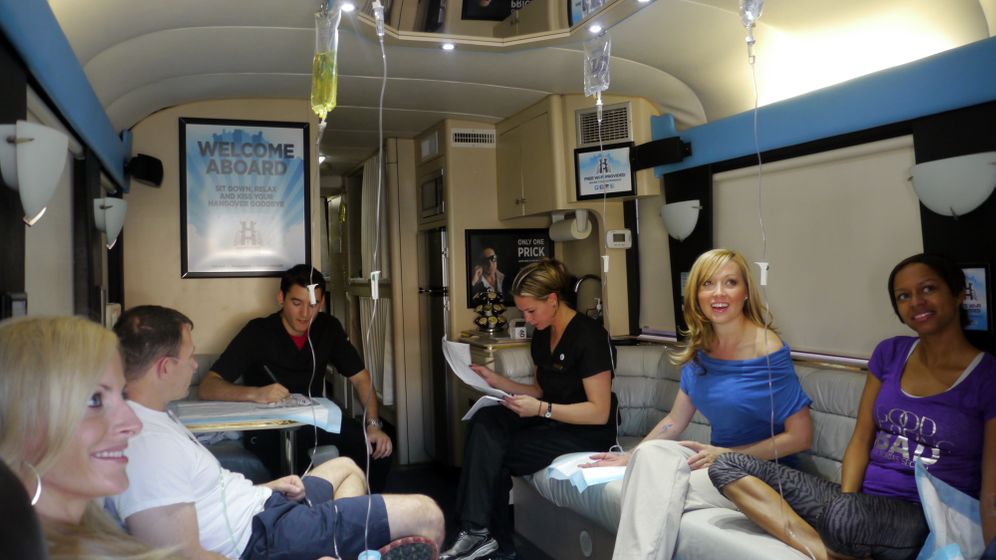 Brian is actually supposed to be boarding a helicopter in three hours for a tour of the Grand Canyon. But at the moment he's sitting in a reclining chair in the back of a converted bus, groaning with an IV in his arm. "Just a while back, he was still dancing on tables," says his brother Zack.

Zack is sitting with his cousin in the rear part of the bus. His eyes are squinted and puffy, and he has an IV in his arm, as well. Brian is supposed to get married in a month, so he and his buddies traveled to Las Vegas a day earlier to celebrate before he makes his vows. They are getting the full package: concert, dance club, strip club -- and buckets of booze.

Zack says his brother had 12 Martini Colas, the last of which came just four hours back. If worse comes to worst, they'll have to cancel the helicopter tour and the visit to the shooting range. But that would be no fun. "Our last hope is the hangover truck," he says.

The hangover truck is the brainchild of Jason Burke, a 42-year-old anesthesiologist who worked in Las Vegas hospitals for seven years before going out on his own and starting up his "Hangover Heaven" practice. Since then, he's been driving his massive, converted bus up and down the Strip treating people who've drunk themselves senseless.

Burke usually doesn't have much work during the week -- unless, of course, there's a big convention in town. He says that he had his hands full a few weeks ago when an international computer company held its annual meeting here. "Keynote speakers, especially, don't want to be hungover the next morning," Burke says. "But that doesn't mean they want to give up partying."

Burke claims to be able to cure a hangover in an hour or less. Zack and his friends didn't need much convincing and booked a "Salvation Package" this morning. For $159 (€125) they got 1.5 liters of saline solution injected into their veins, along with a selection of vitamins and pain killers. As a precautionary measure, they went up a level for their brother, buying the "Rapture Package," which has even more infusions, anti-nausea medications, an oxygen treatment and vitamin B shots. It runs $199.

Part of the offerings include pick-up service from customers' hotels. The company gets the most calls from expensive ones like The Cosmopolitan, the MGM Grand and the Wynn. If a hangover is so bad that patients can't leave their hotel room, they can pay an additional $200 to be treated in their room. "When you come to Vegas, you just want to have fun and not loose a day of your vacation in your room," Burke says, explaining that women often feel nausea as a result of a hangover, while men are more likely to get headaches.

Burke came up with the hangover bus idea because he and his wife are themselves wine and grappa lovers and enjoy going to wine tastings on the weekend. After one of these outings, it occurred to him that, after being anesthetized, many patients exhibit the same symptoms as people with hangovers. "I thought to myself that maybe the same medications would work on hangovers too," he says. So he tried the treatments out on his friends -- with stunning results.

He then created a business plan, bought a bus and turned it into a mobile sick ward with leather seats and huge televisions. The state of Nevada's health department was a bit taken aback by the idea, Burke says, but it still approved it. Now he can simultaneously treat some 20 patients at a time in the bus. He has also opened up an office two blocks from the Strip. "There we handle the patients who are still throwing up," Burke says.

Traditional means of curing a hangover, such as aspirin and coffee, are no longer a match for the kinds of excesses shown by many people partying in Las Vegas, Burke says. After a short time in the hangover bus, the bachelor party attendees are already looking a lot better.

"My headache is almost gone," says Zack after half the contents of the IV bag has disappeared into his veins. His brother is still groaning. "I'm not sure if we're going to be able to get him going in time for the flight," says Burke, slightly increasing the rate of infusion into Brian's arm.

Three young women climb into the bus. All live in Las Vegas and partied a little harder than planned on the Strip the night before. "I don't want to spend my day off in bed," one says. Instead of meeting for breakfast, they all met at the hangover truck. "We wouldn't have been able to hold anything down anyway."

Since May, Burke has treated some 1,500 partygoers, with some patients even dropping by several days in a row. It has proven so popular that Burke now has three full-time employees and five part-time workers, all of whom have received training as nurses. Burke says they've had some pretty bizarre encounters. "One guy cut off his finger, that's how drunk he was. That was a mess, I'm telling you," he explains. Then he talks about a woman who had vomitted so hard after a binge drinking session that the blood vessels in her eye popped.

Critics argue that Burke's service is giving carte blanche to people to take things a bit (or even much) too far and that, by doing so, he is also supporting binge drinking practices. But he sees it differently. "People have always been drinking, no matter how bad the hangover is," he says. Some of the effects of heavy drinking, such as heartburn, are also bad for your health, he argues, adding that he wants to provide patients with help as quickly as possible.

Zack's IV is finished, and his brother places his infusion in a bag he can take with him. Finished or not, he already looks far livelier than he did two hours ago. He even seems excited about the helicopter ride.

When asked if seeing people wrecked by alcohol each day has the effect of deterring Burke and his colleagues from drinking themselves, the doctor says, "no."

"We know what to do afterwards," he says.