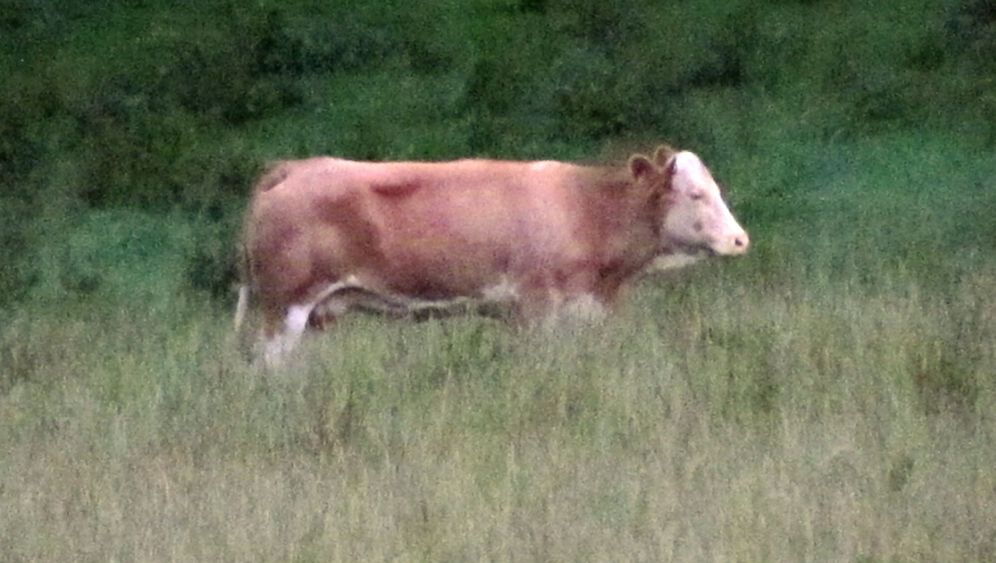 Yvonne, the cow who escaped slaughter and gained international fame by outwitting her pursuers for the past three months, has finally won her freedom, and can now roam to her heart's content through the Bavarian forest where she has found refuge.

The district authority of Mühldorf am Inn in Upper Bavaria said on Friday it had revoked its permit to shoot the six-year-old brown-and-white dairy cow. Yvonne was being fattened up to be turned into steaks until she smashed through the electric fence of a farm in Aschau and bounded off.

"As the animal no longer constitutes an acute threat to road traffic in its current location, no major search or capture operations are necessary," the authority said in a statement. "The Mühldorf district office requests that the animal not be disturbed in its current habitat."

Authorities had initially given permission for her to be killed because she almost collided with a police car during her flight, and was deemed a traffic hazard. But the permit had been temporarily suspended to allow wildlife activists to track her down, tranquilize her and take her to an animal sanctuary. Now it has been lifted for good, and hunters are expressly forbidden to shoot her.

This is the news Yvonne's army of fans have been waiting for. A Facebook page set up in her honor has over 27,000 friends, and media from around the world have devoting copious column inches to her adventures, possibly in a bid to feature some light relief from the Libyan war and financial market turmoil. Her celebrity status evidently helped to protect her.

Bild, the tabloid German newspaper, offered €10,000 ($14,500) for information leading to her safe capture, and provided almost daily coverage of the hunt, even paying a vet to examine one of her cowpats. He declared she was healthy and well-fed.

Prominent Hindus, for whom cows are sacred, weighed in with calls on German authorities to protect Yvonne. A Bavarian band has composed a folk song called "Yvonne You Wild Cow" and hopes it will become a hit at the Oktoberfest beer festival next month.

"Yvonne has truly fought for her freedom. She has shown the world that her urge to be free is strong -- even for a cow," the wildlife charity Gut Aiderbichl, which has purchased Yvonne and wants to offer her a home, said in a statement on Sunday.

The charity, which looks after neglected animals including ponies, dogs, chimpanzees and 400 cattle, has said it too will leave the bovine celebrity in peace for the time being.

"We still want her to come and live with us, but we're only using a very small team now, and the focus is on quietly observing her and making sure she doesn't get agitated," a member of staff told SPIEGEL ONLINE. The team comprises three people qualified to handle a tranquilizer gun.

"She doesn't belong in the forest forever and things would get difficult for her if she stays there until the winter. But the pressure is off to catch her, now that the kill permit has been revoked for good."

During their hunt, Yvonne's would-be rescuers had used a helicopter equipped with a heat-seeking camera, and had even resorted to deploying an attractive ox called Ernst to try to lure her out of the forest with amorous roars. She fled the helicopter and simply ignored what media dubbed the "George Clooney of cattle." Even Waltraud, Yvonne's sister, couldn't attract her out of the woods.

Yvonne evidently feels at home in the woods near Zangberg, some 16 kilometers from the farm she fled. Trackers who have caught a glimpse of her claim she has put on weight, which isn't surprising given the smorgasbord of delicacies available to her in and around the woods -- juicy grass, ample supplies of apples and maize.

With every failed attempt to capture her in recent weeks, Yvonne's fame has grown, as has her ability to outsmart her pursuers. She wised up to the sound of rotor blades, car doors, walkie-talkies and mobile phones, dashing into the undergrowth as soon as she heard them.

Gut Aiderbichl staff complained that she had even grown accustomed to their shift rota, always staying out of sight in the afternoons when they had finished their lunch, and venturing out just before dawn when they were asleep.

One expert tracker was so determined to get her that he crept through the woods in his socks to avoid making a sound, but it was to no avail.

From Dairy Cow to Wild Beast

A week ago, in the dead of night, one intrepid tracker crept into the woods to stalk her. She appeared out of the mist, and stared him straight in the eyes. She walked off before he could fire a dart at her. He reported that she now looks more like a buffalo than a cow, and has evidently turned into a wild animal in her months on the run.

The new hands-off approach reflects a realization that Yvonne is simply too difficult to catch at present. "They're not going to get her," Carsten Rehder, a cattle expert and vet from the northern German town of Preetz, told Frankfurter Rundschau newspaper last week. "She's finding enough to eat at the moment. They should simply wait until it gets colder and then lure her out with food."

Michael Aufhauser, the founder of Gut Aiderbichl, has said Yvonne's odyssey has finally drawn attention to the plight of cattle. "People tend to ignore cattle even though they are such important animals for us. Now they are talking about the conditions in which cattle are kept, transported and slaughtered," he said last week.

Yvonne's transformation from an ordinary, if unhappy, dairy cow into an increasingly shaggy wild beast also reveals that cattle still retain the powerful survival instincts they have gained in millions of years of evolution, said Aufhauser. Three thousand years of domestication have evidently failed to completely tame the beasts.

Yvonne was sold by an Austrian farmer to the farm in Aschau this year because she was nervous and jumpy, he told Bild. She was tethered for months, and her calf Friesi was taken away from her.

Yvonne's happy story contrasts with the poignant fate of other celebrity animals in Germany in recent years. Bruno, the first brown bear to venture into Bavaria in 170 years, was shot dead by hunters in 2006 after a six-week odyssey in which he, like Yvonne, outwitted his pursuers, although he caused a lot more trouble. He killed dozens of sheep, stole honey from beehives, sat on a guinea pig and at one point strolled past the police station of a Bavarian village while expert trackers with specially trained dogs were miles away looking for him. His death is still mourned.

Then there was Knut, Berlin Zoo's polar bear star who enchanted millions and died tragically in his enclosure in March from a brain disease.

Paul the Octopus, who correctly predicted all the German national team's matches during the 2010 World Cup in South Africa and emerged as the only true star from that tournament, died last October, albeit of natural causes.

And now Heidi, the cross-eyed opossum in Leipzig Zoo, who helped to present the Oscars for an American TV network this year, is reported to be feeling poorly.

For Yvonne, however, a bright future beckons, unless she is run over by a truck. If and when she wanders out of her forest, she will be taken to a sanctuary that describes itself as "positively Indian" in its respect for animals. There, she will be able to live out her days grazing peacefully alongside her son Friesi and her sister Waltraud, who have also been purchased by Gut Aiderbichl.