It was Rose Monday in the German city of Cologne and the festivities for the 1934 Carnival were well underway. Of the many floats taking part in the traditional parade, one featured a group of men dressed up as orthodox Jews. The banner above them read "The Last Ones Are Leaving." This was, after all, Carnival under the Third Reich.

The float was one of the many expressions of anti-Semitism marking the German Carnival season during the years leading up to World War II. Another float from 1935 seems a terrible harbinger of the Holocaust to come. In Nuremberg, where the infamous anti-Semitic race laws would be introduced later that year, a papier-mâché figure of a Jew hung from a bar on a model mill as if on a gallows.

Yet until recently, it has been almost taboo to speak about Germany's Carnival and the Nazis in the same breath. Carnival, the pre-Lent festival celebrated in the predominantly Catholic west and south of Germany, displays the cheerful, humorous, raucous side of Germany. Nothing could seem further removed from the horrors perpetrated by Hitler's regime. 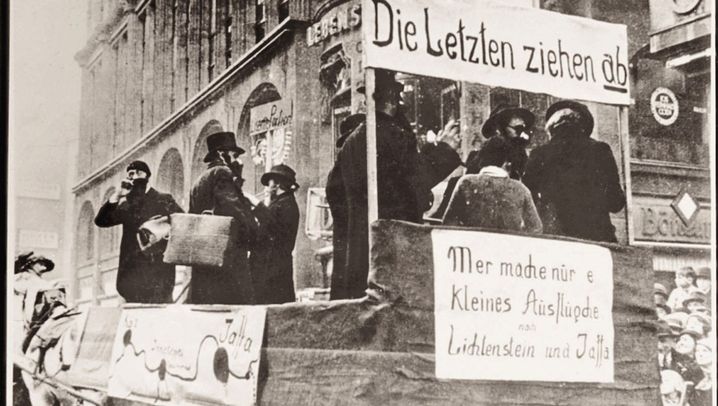 Yet, the Nazis "quickly realized the potential of Carnival," says journalist and historian Carl Dietmar. He and fellow historian Marcus Leifeld have shed a spotlight on this aspect of Nazi Germany in their new book "Alaaf and Heil Hitler: Carnival in the Third Reich." Trawling the carnival organizations' own archives, they have uncovered the extent to which the Nazis managed to exert control over the festival.

The Nazis saw that the tradition of Carnival could be used to portray their notions of the German Volk or nation. Yet its anarchic fun and potential to mock those in power was something they sought to strictly control. Right from the beginning of the Nazi regime in 1933, there were orders not to mention Hitler during the festivities. And the many officials charged with putting on the festival -- the presidents of the committees, the so-called Büttenredner (carnival speakers) and those designing the floats -- were all careful to obey that order.

On the whole, the Nazification of the tradition was a gradual and incomplete process. The question of just how Nazified Carnival became varied from club to club and town to town. "It is surprising how heterogeneous it was," Leifeld told SPIEGEL ONLINE. Those in charge of Carnival reflected the wider society: There were convinced Nazis and people who just went along with things. There were also disputes within the clubs, though they rarely reflected any fundamental questioning of the Nazi ideology; mostly they were disagreements on how much tradition should be kept and how far things should be changed to reflect the new era.

The authors also debunk a long-cherished myth that in Cologne, carnival organizers had somehow resisted being taken over by the Nazis. The infamous Narrenrevolte ("Jesters' Revolt") of 1935, which saw the local committee refusing to be taken over by the Nazi leisure organization Kraft durch Freude, was merely a way of holding onto power and to the sizeable profits that accrued during the festival, Dietmar told SPIEGEL ONLINE. Similarly, the president of the Cologne Carnival committee had been a member of the Nazi party since 1932 -- but that didn't prevent him from returning to the helm of organizing the annual event after World War II.

Paying the Ultimate Price for Defiance

Yet there were some rare instances of defiance. For example, one Carnival group in Frankfurt dared to print posters in a newspaper depicting the Führer as a Carnival jester. A team of Nazis was immediately sent out to destroy the club's float and arrest the editors, who spent three weeks in prison.

The famous Cologne Carnival speaker Karl Küppner also fell foul of the authorities after making one too many jokes about the Nazis. During one speech, he stuck out his hand to do the Hitler salute and quipped: "Looks like rain." Küppner ended up in jail and was barred from making any more speeches.

And the president of Düsseldorf's Carnival committee, Leo Statz, paid the ultimate price for his irreverence. He had repeatedly annoyed the Nazis with his satirical Carnival songs and in 1943, after drunkenly questioning whether Germany could win the war, he was arrested by the Gestapo and eventually executed.

Nonetheless, these were the exceptions. On the whole there was a large degree of compliance with the regime. "There were jokes in almost every Carnival speech about Jews as well as other enemies, such as the French or Russians," says Dietmar. Many of the floats mocked the League of Nations, and favourite hate figures were American politicians, such as New York Mayor Fiorello La Guardia, whose mother was Jewish.

However, the Nazis were also wary of the Carnival tradition of cheeky disobedience to the powers-that-be. Largely organized by the lower middle classes, Carnival had traditionally been one of the few ways of expressing criticism of authoritarian rulers. The Nazis made every effort to reign in the unruly aspects of the festival. They placed emphasis on the organized parade, and discouraged the street party aspect of the festivities. During Carnival time, pictures of Nazi leaders had to be taken down for fear they might be defaced by drunken revelers.

The Third Reich tried to turn the celebration into another kind of performance, akin to the rallies Nazis so excelled at. Their carnivals had "less humor and more pomp," says Leifeld. For example, the so-called Prince's Proclamation, which even today still ushers in the Carnival, was a Nazi invention. They also discouraged the traditional cross-dressing, with its connotation of homosexuality. Gone was the tradition of a man dressing up as a lady as part of the trio that leads the Cologne parade. From 1936 on, these roles were played by Fräuleins only.

For the regime, Carnival was a useful propaganda tool to the outside world. There were repeated references to the jobs created and the boost to the economy. The Nazis launched an advertising campaign to attract foreign tourists and to show the country in a favorable light and to show the "peaceful Germans, who didn't want war, but just wanted to have fun," says Leifeld.

The campaign worked, with many foreign tourists travelling to Germany for Carnival, particularly from the Netherlands. Over 1 million guests are thought to have visited Cologne for the last Carnival before the war in 1939.

A Desire to Know About Everyday Life

The history of Carnival is in many ways a reflection of the process by which the Nazis took over society as a whole, says Leifeld. It was slowly but surely, rather than a complete overnight transformation in 1933, when the Nazis came to power. The gradual exclusion of the Jews from carnivals is indicative of this process. Since the 19th century, many Jews had played a prominent role in carnivals, for example in Koblenz and Freiburg, and Jews had even founded their own Carnival club in Cologne in 1922. Yet after 1930 the president of that club emigrated to Los Angeles, and by 1935 each club had to declare that it was completely Aryan.

It is only in the past 10 years or so that people have started to show an interest in this forgotten aspect of German history, rather than wishing to sweep it under the carpet, says Dietmar. People in Cologne and the rest of Germany want to know about everyday life in the Third Reich, and about what things were like locally, Leifeld says.

The history of Carnival shows in some way that Nazis were not outsiders who suddenly imposed their regime on Germany in 1933, but that it was a gradual process of "turning the screw" until society became Nazified, Leifeld argues.

"They weren't aliens from outer space," he says. "They were part of the society." 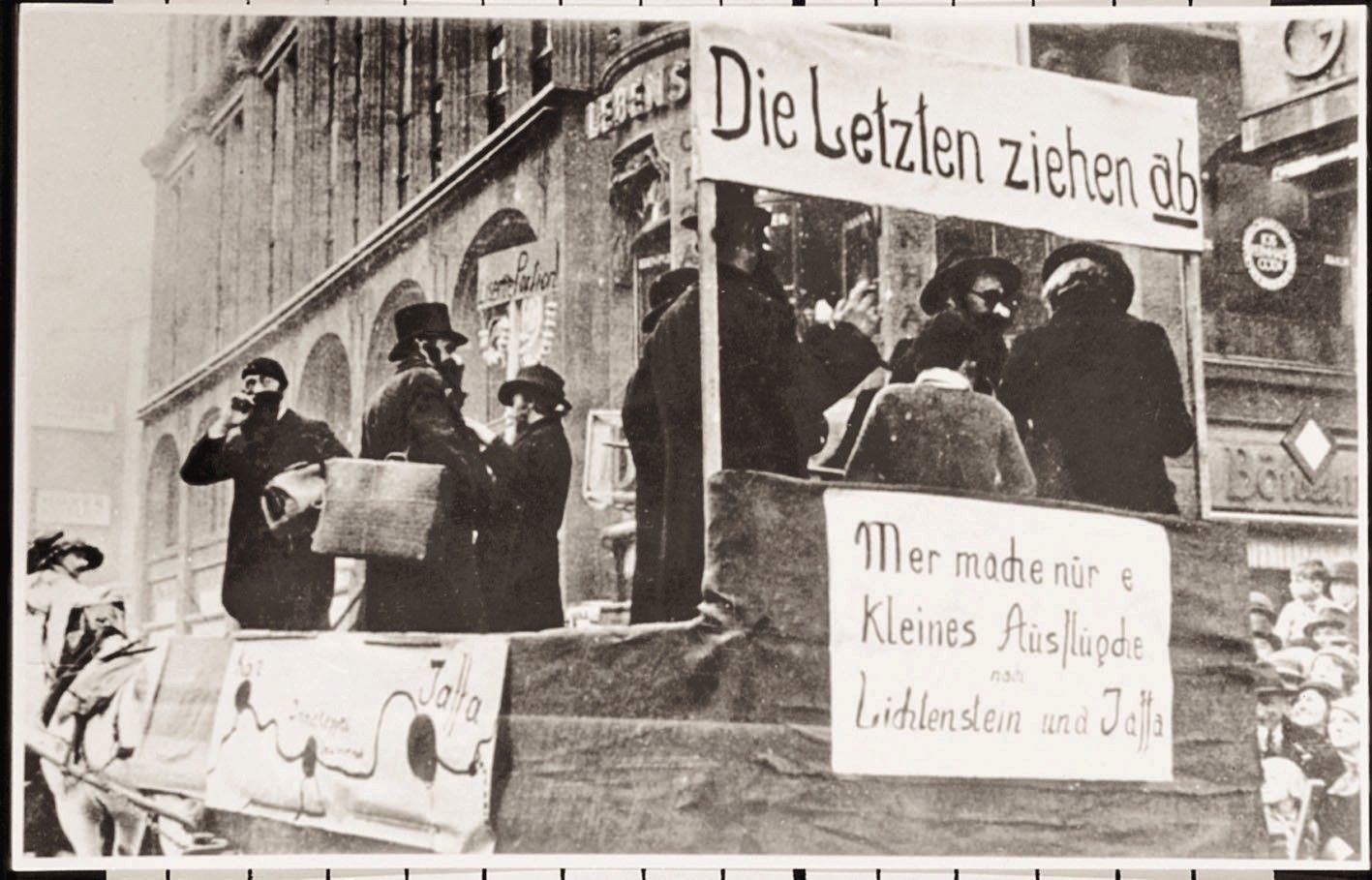 An anti-Semitic float from 1934 in Cologne: The Nazis had a bigger influence on Germany's Carnival than is widely believed.

A new book by historians Carl Dietmar and Marcus Leifeld, "Alaaf and Heil Hitler: Carnival in the Third Reich," reveals how the Nazis sought to harness the potential of Germany's Carnival tradition for their own ends. Anti-Semitic floats, like this one from Cologne Carnival in 1934, were common. The banner reads: "The Last Ones Are Leaving."

A new book by historians Carl Dietmar and Marcus Leifeld, "Alaaf and Heil Hitler: Carnival in the Third Reich," reveals how the Nazis sought to harness the potential of Germany's Carnival tradition for their own ends. Anti-Semitic floats, like this one from Cologne Carnival in 1934, were common. The banner reads: "The Last Ones Are Leaving."