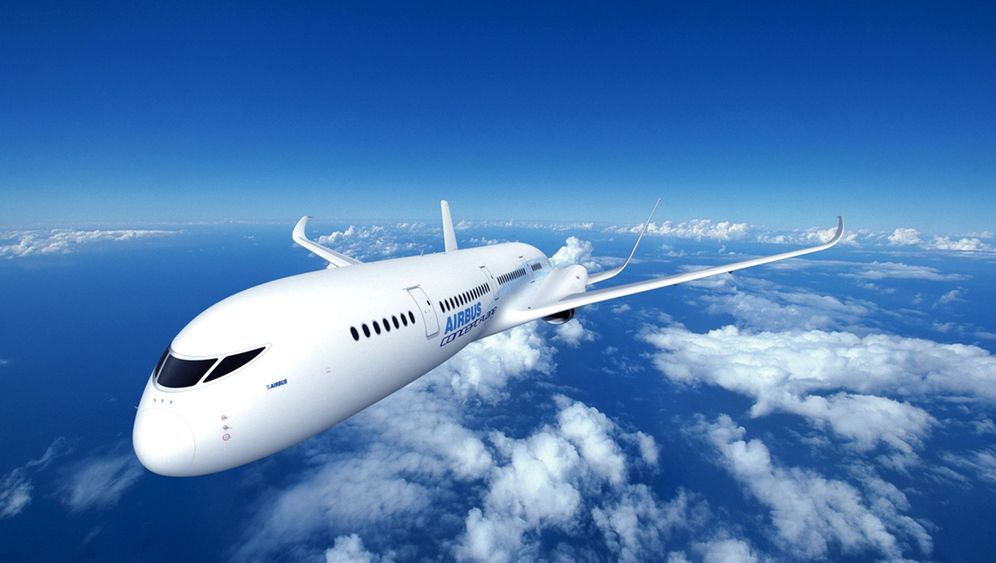 The airplane dissolves into thin air, as if erased by an invisible hand. First the cabin roof disappears, then the floor, and from one moment to the next, the passengers feel like they have lost their grip on anything solid.

But the men and women on board, more than 300 of them, don't fall out of the sky. Instead, they continue their relaxed flight through the clouds. If they look above, they gaze into the sea of stars that is the Milky Way. When they look down, they see the glittering lights of the cities below.

Right now, a transparent airplane like this one is nothing more than a technological fantasy, in which the plane's outer skin would be made of a special futuristic type of ceramic. The push of a button would send electricity flowing through the material, rendering it transparent.

A Plane from Out of Science Fiction

"Passengers in an airplane like this would experience flight in a completely new way," enthuses Axel Krein, 49, head of research and technology for European aircraft manufacturer Airbus. The unconventional idea came from the special team that Krein himself put together to forge ideas for the airplanes of the future.

"We told our engineers to give their imaginations free rein," Krein explains. "What emerged were completely realistic visions of flight in the year 2050. Our people are grounded in reality, after all. And most of the necessary technology already exists."

Still, from a current perspective, some aspects of Airbus' "Concept Plane" sound so utopian, it seems only a descendent of Jules Verne could have conceived of them.

For example, another idea involves an aircraft outer skin that can repair itself. The moment that sensors detect a hairline crack anywhere in the aircraft, microscopic nano-capsules containing a high-tech adhesive would be released to seal the fissure. "The airplane almost becomes a living organism this way," Krein says.

Airbus' developers also envision the air travel of the future as an exceedingly clean affair. Nano-materials would allow seats to clean themselves, a system more hygienic than employing cleaning crews -- and far cheaper. "In the future," Krein suggests, "each passenger will feel he or she is sitting on a brand new airplane about to take off on its maiden flight."

Anti-turbulence sensors could make a further contribution to passenger comfort. These would detect unpleasant air pockets ahead, allowing the aircraft to adjust its navigation automatically, without assistance from the pilots, and the passengers to glide gently through the air.

The engineers' most important goals are reductions in fuel consumption and jet engine noise. In order to achieve these aims, they are planning a revolution in aircraft construction. The engines would be embedded into the fuselage, instead of located under the wings. With a more aerodynamic shape and framed by a curved tail plane, these engines would make for a more streamlined aircraft, as well as directing most of their noise upward. "Passengers will hear hardly any engine noise," Krein says, "and the same goes for people on the ground."

This design poses just one disadvantage -- the engines aren't easily accessible, making frequent maintenance essentially impossible. "In any case, we assume we will be using nearly maintenance-free engines by 2050," Krein explains.

The unusual shape of the fuselage -- Airbus' "Concept Plane" looks something like a flying tadpole -- will also reduce fuel consumption significantly. The fuselage shape contributes additional lift, as do the longer, narrower wings.

If the Airbus engineers have their way, future passengers may contribute to reductions in fuel costs themselves -- without even realizing it. Passengers' body heat would be collected and fed into onboard systems using heat exchangers.

But this isn't as futuristic as it sounds: There's a precedent for this sort of use of body heat. For centuries, farmers have built their barns to allow warmth from the cows to heat the farmhouse.