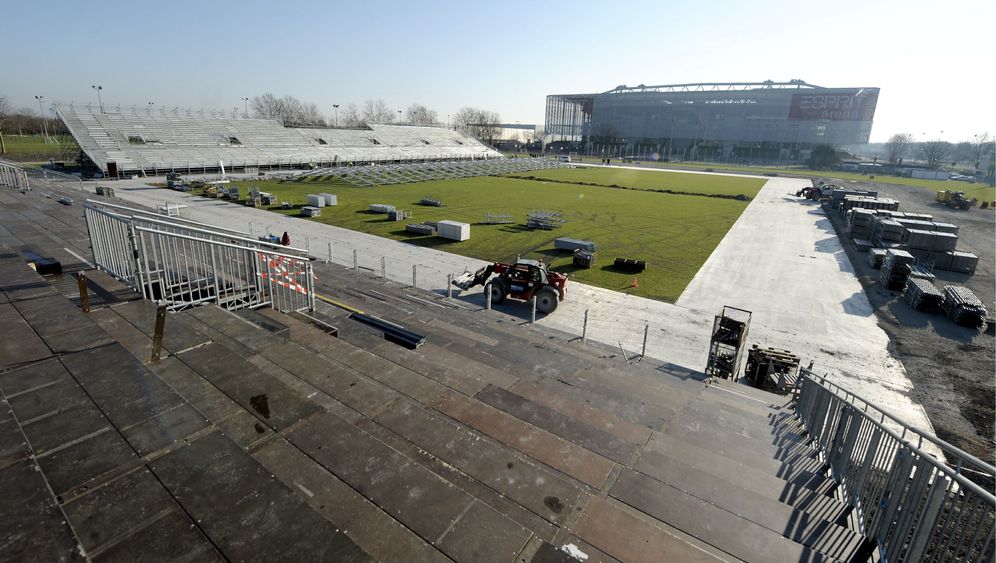 Photo Gallery: The Age of the Modular Arena

For the past two weeks, semitrailers have been rolling through Stockum, a district of Düsseldorf. So far, they've hauled in nearly 3,000 tons of material. The aim of all this activity is to build a spectacular new temporary home for Fortuna Düsseldorf, the city's long-standing soccer team, which currently plays in Germany's second-tier professional soccer league.

Fortuna normally plays its home games at the nearby Esprit Arena. This May, though, the arena will host the annual Eurovision Song Contest. Since last year's winner, Lena Meyer-Landrut, is German, her home country gets to host this year's contest. As a result, the soccer team will have to take up temporary residence in a stadium right next door.

The prefabricated arena, scheduled to be ready for use in roughly six weeks, includes 20,168 seats covered by a roof. The final price tag of €2.8 million ($3.9 million) also includes everything from VIP boxes with marble floors to hot dog stands. Fortuna will play only three games in the temporary stadium, and then it will be dismantled over the course of 30 days. No German soccer stadium this size has ever been built so quickly -- or taken down after such a short time.

The Future of Sports Construction

The entire plan sounds like architectural lunacy, yet this is the future when it comes to building sports complexes. Whether it's ski races in the mountains, athletic events on the beach or even the Olympics -- rather than undertaking expensive concrete construction projects that often end up standing unused after fulfilling their original purpose, event organizers have come to prefer temporary, modular structures that can be partially or completely removed after use.

"Sustainability is playing a larger and larger role," says Bernd Helmstadt, head of the business unit in charge of stadiums for Nüssli, a Swiss company specializing in event construction and temporary structures. "People are no longer building permanent structures unless they know they will still be used two years down the road."

The company offers temporary arenas with up to 50,000 seats, including floodlights, scoreboards and rooms for conducting doping tests. Last year, in just three months, Nüssli built a stadium at Empire Fields in Vancouver, Canada, with seating for 27,500 spectators. The Vancouver Whitecaps, the city's professional soccer club, moved into the temporary stadium while their home arena underwent renovation.

One example of just how flexible such facilities can be was seen at the 2006 Soccer World Cup held in Germany. During that event, a stadium was set up in front of the Reichstag, home to Germany's parliament, providing a place in the heart of Berlin where fans could watch public screenings of the games. The arena accommodated 10,000 viewers and was built to resemble a miniature version of Berlin's Olympic Stadium.

For the structures supporting the grandstands of these stadiums, the company uses a system of steel bars forming something resembling a highly sophisticated form of scaffolding. Ticket booths, changing rooms, restaurants and VIP boxes are all prefabricated modules that -- almost like shipping containers -- just need to be put in the right place and properly outfitted.

All together, Nüssli keeps a stock of stadium modules with a total capacity of 200,000 seats. These can be combined to create anything from a small tennis stadium to a soccer arena on the scale of the one in Düsseldorf.

Prefabricated stadiums are especially appealing for clubs that frequently jump between different divisions of their sport since this type of construction allows them to expand or reduce the size of their grandstands at low cost. Entire stadiums that comply with central-European building regulations are available starting at €250 per seat. Since most clients only need the arenas for a few months, they usually rent or lease them.

December 2, 2010 was a red-letter day for the companies that build these flexible stadiums. That was the day FIFA, soccer's international governing body, awarded the 2018 World Cup to Russia and the 2022 one to Qatar. "We all cheered," says Karlheinz Haller, sales manager at Lichtgitter, a German company that makes similar arenas.

Qatar alone needs nine new stadiums, most of which will be taken apart again after the soccer championship, and Haller is expecting to win some major contracts. Temporary structures made from a simple steel framework are particularly well-suited to weather conditions in the Persian Gulf. "Concrete becomes difficult to work with at temperatures above 35 degrees Celsius (95 degrees Fahrenheit)," Haller explains. Switzerland's Nüssli is already working on blueprints for modular stadiums in the emirate.

In Germany, those in the industry hope the modular stadium in Düsseldorf will significantly boost their acceptance. "People here are still used to rock solid concrete, and many clubs have their doubts about moveable grandstands," says Ingo Partecke, editor of the online trade magazine stadionwelt.de. "There are emotional barriers there."

Indeed, even officials in Düsseldorf have their own "Plan B." If construction of the temporary stadium fails, Fortuna will play in a concrete arena after all -- but one belonging to neighboring team, VfL Bochum.