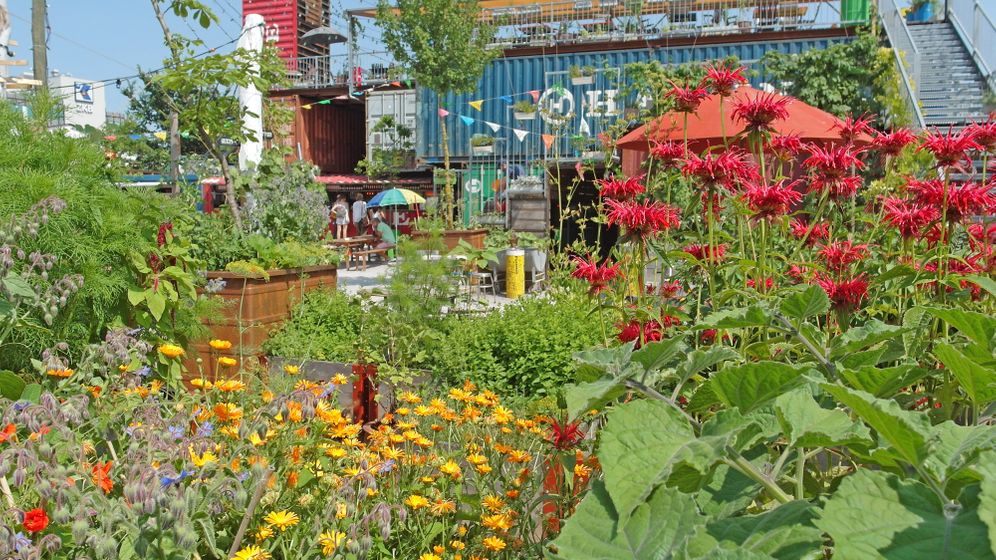 The sign reads "Toad Pond" at the top, followed by "Frau Gerold's Garden has built a place for yellow-bellied toads here." Below it lies an empty beer bottle; behind it, a fence and then some train tracks and power lines. The sound of a rail service announcement echoes across the tracks: "There will be disruptions to your service. Replacement buses will be made available." Sunshine is reflected off Prime Tower, the tallest building in Switzerland. A yellow brimstone butterfly glides across the nearby lavender bushes, as sunflowers droop lazily over the side of an abandoned shopping cart.

"Frau Gerold's Garden," situated in an industrial park in western Zurich, is what the Swiss refer to as a "Gartenbeiz" (beer garden). But it has more to offer than just pints of local brew. In an effort to fuse several elements of hipster culture, German designer Katja Weber has put 2,500 square meters (27,000 square feet) of wasteland to novel use.

A series of colorful shipping containers now house shops and bars, and a huge circus marquee has been erected to shield beer drinkers from the rain. The retailers that have taken up residence in the containers offer clothes and designer knickknacks that one won't find in mainstream stores. A series of wine barrels and wooden crates have been set up in a corner of the site to make a colorful vegetable patch -- rhubarb, sweet peas, chard and lettuce.

Do-it-yourself containers, original designs and what is now commonly referred to as "urban gardening" are elements of a trend taking hold in cities around the world. In the process, entrepreneurs are taking advantage of unused urban areas, which are often offered at low rents and, in some cases, for free.

However, these are usually only temporary arrangements, with the pop-up venues only filling the interval before developers swoop in to construct luxury apartments, office buildings or -- as was the plan in Zurich -- conference centers. But they all share one thing in common: They are easy to erect, and just as easy to demolish. The fact that they are makeshift and have a somewhat fleeting feel to them only lends them more charm.

Several years ago, London became home to the world's first pop-up mall. Situated in London's trendy East End, "Boxpark" features 61 black containers housing both established brands and young designers. Bars, cafés and galleries have taken up temporary residence there to attract the young crowd. As is the case with Frau Gerold's Garden, its existence is limited to five years.

Meanwhile, in Christchurch, New Zealand, local entrepreneurs have brightened up the earthquake-shattered cityscape by installing a series of shops in shipping containers. And in Berlin, a former soap factory in the Kreuzberg neighborhood -- now known as "KaterHolzig" -- has been temporarily repurposed to house a club, a theater and a restaurant.

Urban gardening is transforming concrete jungles everywhere. Initiated by residents, and often subsidized by local authorities, the number of urban garden plots featuring herbs, vegetables and fruits in old shopping carts, barrels and wooden crates is on the rise. These leafy additions to the urban landscape are considered places that are at once an escape from city life and a driver of multicultural integration. The "Prinzessinnengärten" (Princess Gardens), a series of urban gardens set up in 2009 near the Moritzplatz roundabout in Berlin, are considered forerunners of this trend.

Katja Weber, a 33-year-old native of the western German state of Saarland, united the concepts of urban gardening, gastronomy and retail to create her own unique commercial masterpiece. Seven years ago, love brought Weber to the Alps. She gave up her former life and job as an investment banker to pursue a master's degree at Zurich University of the Arts (ZHdK). Her thesis, titled "The Development of Multi-Functional Urban Landscapes," was her inspiration for Frau Gerold's Garden, which got its name from its location: 23 Gerold Street.

Cabbage Patch in a Barrel

It takes Caroline Weiden 15 minutes to get to the "Gartenbeiz." She is carrying two vegetable crates filled to the rim with cabbage, celery, tomatoes, lettuce and herbs. Weiden, a 42-year-old marketing executive, is one of only a few people who look after their own allotments in Frau Gerold's Garden; the remaining fruit and vegetable patches are cultivated by two professional gardeners. Around 5 percent of the produce used in Frau Gerold's restaurant is sourced from the nearby allotments.

"I like the fact that you can show people how to cultivate fresh produce in their own plot," Weiden says. However, unlike at other urban gardening projects in the area, she does doesn't know her fellow gardeners personally.

Frau Gerold's Garden, which opened its doors in September 2012, is run by Katja Weber and her partner, a member of Zurich's restaurant scene. The women initially signed a five-year lease for the grounds. In its early days, the garden was considered an insider tip, but it soon rose to international fame, with one local branding it "the place to be" this year. "I like the urban feel," says another. "It's unique in the city." Indeed, it's a small oasis surrounded by concrete, skyscrapers and traffic.

Whether bankers or students, tourists or locals, they are all drawn to the venue on sunny days to sip coffee, drink beer and listen to live music played by bands perched on a nearby wooden staircase. Ever since a Swiss television station broadcast a 10-hour special about the West End of Zurich, families and young people have been pouring in from all over Switzerland to spend their weekends here.

Over the course of a decade, the district has blossomed from urban wasteland to the most sought-after area in Zurich. According to Alex Zwalen, the transformation has sped up over the last two years. Dressed in a white smock, the 55-year-old artist is in the process of tidying his studio, which he set up here some 17 years ago.

The redevelopment of the industrial park in Zurich's District 5 began toward the end of the 1990s. Many of its warehouses and factories, some dating back to the late 19th century, were demolished. "Many craftsmen and stonemasons were based here; there was even a beer garden right in the middle," Zwalen says. "Though I'm not nostalgic, my heart does go out to those who were forced to leave here because of the new buildings."

Some 15 years ago, the first cinema opened in the area, followed shortly thereafter by illegal clubs. In no time, luxury lofts and shiny new office buildings were being built. The open archways beneath train station viaducts were soon filled by expensive design and interiors shops as well as high-end restaurants.

Amid all of this glitz, Zwalen is happy to see Frau Gerold's Garden, saying it "brings a hippy vibe to the street." He also says that its colorful design and cheerful gardening allotments are "an answer to the skyscrapers -- but nothing more." In fact, only a few of his neighbors would ever venture into the garden because of what he says are the restaurant's high prices.

Katja Weber's "multi-functional urban landscape" could remain in the area for longer than originally thought because plans for the conference center have fallen through. No one can say what will happen to Frau Gerold's Garden after 2017, but one thing is certain: Weber won't be there to see it. She plans to return home to Germany in search of new pop-up opportunities.