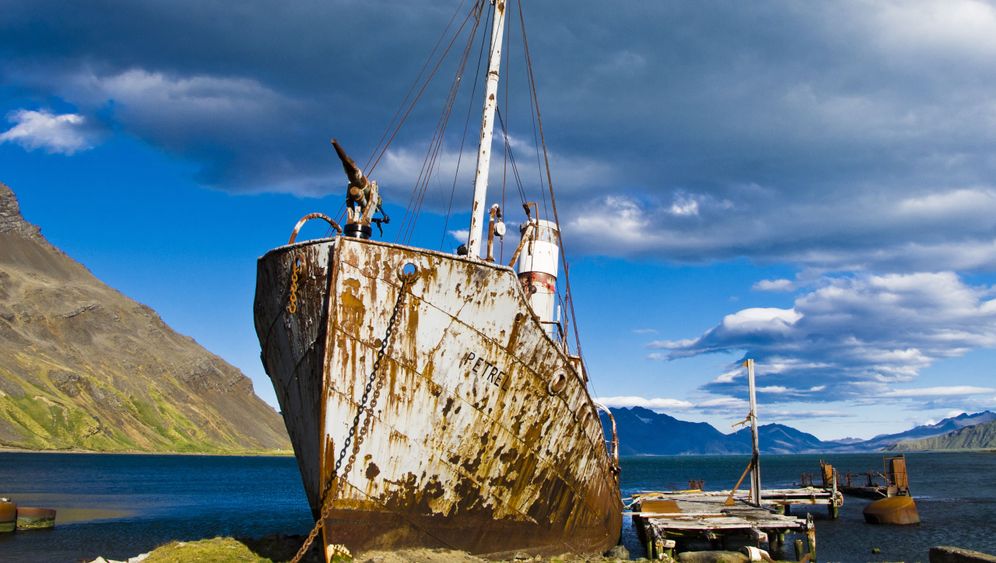 Here at the bottom of the world, there is a movie theater, a church, a museum and a cemetery. All the cozy homes have been buried and destroyed by snow and ice. All the people that used to live here have moved away or died long ago. A landscape once filled by 500 men and their families is now inhabited by at most a few penguins, seals and tourists. And what was a remote stronghold of industrial whaling roughly a century ago is now nothing more than a city of ice, snow and rubble.

This is Grytviken, the whaling station on the British island of South Georgia, lying in the South Atlantic roughly 2,000 kilometers (1,200 miles) due east of the bottom boot tip of Argentina. For 58 years, Grytviken was in continuous operation. It survived two world wars and a global economic crisis, greeted expeditions to Antarctica that had gotten stuck in pack ice and processed an enormous number of whales into oil and meat. In more than half a century, it handled 53,761 slaughtered whales, producing 455,000 metric tons of whale oil and 192,000 metric tons of whale meat. Then Grytviken became the icy ghost town that it is today.

This fate was shared by many other whaling stations in the Antarctic. As the whaling industry boomed at the beginning of the 20th century, dozens of companies set up whaling operations here. When it became clear that whaling could fetch hefty profits, six permanent whaling stations were set up on South Georgia alone. Grytviken was the first one to launch operations -- and the last to close up shop.

And just like all its competitors, Grytviken's whaling station was a victim of its own avarice.

Whaling Where No Man Had Whaled Before

Of course, everything had started out at a leisurely pace. When the Norwegian captain and high-sea fisherman Carl Anton Larsen first wanted to set up the world's southernmost whaling station, he didn't even have boat at his disposal. The first ship to be stationed there was the Fortuna, but it arrived in Grytviken a year behind schedule because the German company that was supposed to make the crankshaft for the ship's engine had bungled the job -- at least that's what Larsen's Norwegian supplier claimed.

Despite the initial difficulties, Larsen had a solid plan. On April 8, 1904, he had the Compañía Argentina de Pesca ("Argentine Fishing Company," or CAP) entered in the business register of Buenos Aires. The company was a Norwegian-Argentine joint venture funded by a handful of rich investors from Buenos Aires, as well as one from Hamburg. Larsen's business model sounded simple and clearly won over his sponsors: to boldly whale where no man had whaled before -- in the Antarctic.

The prevailing view at the time was that whaling around the South Pole promised little. At an international conference held in London in August 1895, the Royal Geographical Society (RGS) had publicized the findings of a number of costly expeditions to the Antarctic region to explore whaling opportunities there, including one made by Larsen himself. The RGS stated that "it would be futile to start whaling in the Antarctic; a great number of the large whales had thin blubber and short baleens and it was not worth the whaler's time catching them."

Nonetheless, Larsen was convinced that whaling there would be a good idea -- primarily because Europe's northern seas had largely been emptied of whales by the turn of the century. While on several expeditions to Antarctica, he had seen with his own eyes large groups of whales swim right past him. What's more, he was enthusiastic about Grytviken, a sheltered bay within a bay, which he described in his diary as "one of the finest harbors imaginable." In his firm prospectus, he also reassured potential investors of the enterprise's sustainability, noting that "the quantity of whales available gives no ground for fear."

On November 16, 1904, the Fortuna and another ship dropped anchor off Grytviken, and the station's new 80-member crew set to work. It didn't take long before the station was up and running. By Christmas Eve, the men had produced the first barrel of whale oil. Within a year's time, that figure was meant to skyrocket to 7,000.

Rise of the Killing Machines

The whales were hunted down on the open seas, shot with harpoons, dragged to port and heaved onto shore at the stations. They were particularly prized for their blubber, the white layer of fat beneath the skin. At the time, the glycerin derived from this blubber was the main element used in cosmetic products like soaps and lotions, but it also formed the basis of fuels for oil lamps and boilers.

Larsen had never had luck finding reliable investors for his enterprise back home in Norway. But that didn't stop many fellow Norwegians from copying his idea after hearing about the great success of his operation in Grytviken. They followed him to the Antarctic and began whaling.

As time went on, the competing whaling stations continued to boost their capacities. At times, they even had to lend each other empty barrels when stations had more fat than containers to store it in. Between 1907 and 1908, the station at Grytviken produced more than 27,000 barrels of oil, after having filled only about 12,000 the previous year. These years in the first decade of the 20th century were also a golden era for those who invested in such operations: Within a single year, their dividends rose a mighty 15 percent, to reach 32.5 percent.

Even after Europe slid into war in 1914, things continued to go comparatively well for the whale hunters in the Antarctic. The supply of coal needed to fire the blubber-melting boilers admittedly got tighter. But the general shortage of resources simultaneously drove the price of whale oil up. Indeed, at times Grytviken could fetch up to 90 British pounds for a metric ton of whale oil -- more than they had ever earned before. The whale fat also found use in the war effort, with blubber-produced nitroglycerin being used in explosive artillery shells and bombs. What's more, there was growing demand in war-plagued Europe for cheap, but nutritious whale meat.

Butchering the whales at the stations was hard work done by hand. After being harpooned and towed to port, the whales were winched up a ramp and onto shore to die. Using sharp blades, two men made incisions on both sides of the whale along its entire length. From these, the white blubber would then pour out to the left and right. In the end, the men would strip the skin of the whale and separate the blubber from the meat.

Lured by high oil prices, some 19 companies set up whaling operations in the Antarctic at the beginning of World War I. Many of them wanted to speed up the killing process by going out on the high sea to hunt without a permit or dedicated processing stations. In doing so, they also cut into the business of land-based competitors, such as the Grytviken station.

The situation came to a head the following year, with whales becoming increasingly scarce and the storage rooms filling with unsold oil. In the 1930/31 season, the slaughter at the South Pole reached its zenith: A total of 40,201 whales were killed, about 32,000 of which were killed by unlicensed hunters on the open sea. By way of comparison, when Grytviken heralded in the era of industrial whaling in the Antarctic in 1904, whalers killed only 183 whales in the initial year.

The companies agreed to voluntary quotas for the next season, but the limits came too late for many species. By the mid-1930s, the humpback whale was virtually extinct in the Antarctic. At the same time, overproduction drove the price of whale oil to a record low. One station after another on South Georgia went under. By the time World War II broke out, only two were still active: Grytviken and Leith Harbour, whose cold warehouse also stored tons of whale oil produced in Grytviken.

Grytviken stayed afloat only because it still had financial reserves left from the golden years to temporarily cushion its losses. In addition, CAP, Larsen's company, had built a vital seal-hunting business. It was also the only company that went out hunting for the duration of World War II -- not least because many whalers were drafted into the navy.

End of an Obsolete Industry

But the few successful years couldn't make up for the fact that the company needed restructuring and to update its dilapidated station. In 1950, for example, Grytviken was being served by six harpoon boats that had been in service for more than 20 years.

One last attempt at modernization in 1962 came too late. In that year, CAP was bought by a group of Japanese businessmen. But within three years, they had also given up on the company and dissolved it.

Captain Larsen, the father of industrial whaling in the Antarctic, wasn't forced to witness the demise of his business. He had died in 1924 -- on board a ship in Antarctica, out to explore new fishing areas.