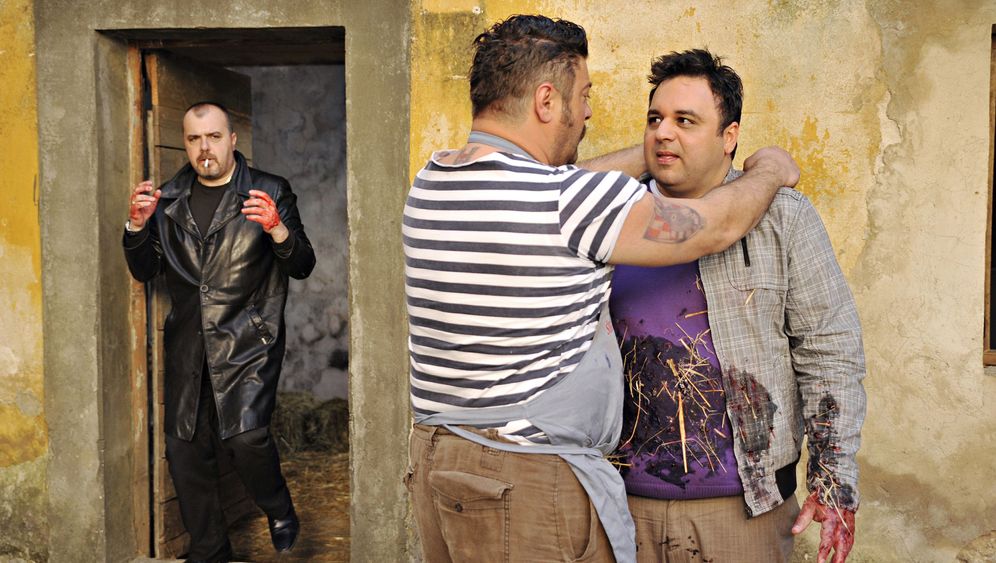 The comedy "Parada" ("The Parade") was last year's surprise hit in the Balkans, with Serbian director Srdjan Dragojevic managing to draw 500,000 moviegoers into the theatres. It's especially surprising when one considers that "Parada" is about a homosexual couple who wants to organize a gay pride parade in Belgrade, despite obstacles in the form of right-wing violence and government opposition. One of the many comical aspects of the film is that the character of Limun, a thuggish war veteran, becomes responsible for the couple's security.

Dragojevic presented his film at the Berlin International Film Festival this week. SPIEGEL ONLINE caught up with the groundbreaking director to talk about the challenges of making a film about gays in the Balkans.

SPIEGEL ONLINE: Mr. Dragojevic, you've indicated that making this film was your civic responsibility. What do you mean by that?

Dragojevic: I know that sounds somewhat ostentatious. I firmly believe that art can change people's attitudes. For this reason I make films for the so-called man on the street. Many filmmakers, especially in the big US studios, underestimate their public's intelligence. Most filmgoers are more open and smarter than you think.

SPIEGEL ONLINE: Do you think that "Parada" has changed people's views?

Dragojevic: Yes. With "Parada," I've actually achieved nearly all the goals I set out for myself. I wanted to show as many people as possible how the majority treats the minority and I've achieved that. In Serbia alone, around 330,000 have seen the film. Of that figure, the majority are, in my opinion, homophobic. Despite this, the feedback has been almost entirely positive. A friend of mine told me that his teenage son came back home in a bad mood after seeing "Parada." The teenager said he thought the film was shit because after seeing it he can no longer hate gays. I made the film for such people.

SPIEGEL ONLINE: The film was not only a hit in Serbia, but in the whole Balkan region. How do you explain that?

Dragojevic: I think that "Parada" is not seen as a Serbian film but as a Yugoslavian one. Later on in the movie, the war veteran Limun brings together his fellow soldiers from all parts of the former Yugoslavia. This type of reconciliation is on the rise. Recently there was a program on Slovenian TV that showed Croatian and Bosnian war veterans collecting money for their Serbian colleagues because the Serbs' pensions were insufficient. Can you believe it? What we are experiencing is for all intents and purposes the end of the war.

SPIEGEL ONLINE: Judging from your movie, homophobia seems to be the only thing that unites the Balkans.

Dragojevic: There's a grain of truth to that. The film plays with this idea and uses it to its benefit. What really unites people, though, is that they have a good heart.

SPIEGEL ONLINE: Why is it that homophobia in Serbia and in the entire region has spread so widely and become so militant?

Dragojevic: This is a complex development, but if I have to simplify it, it's due to people's fear and bewilderment in the face of the economic situation. Many young people experienced how their parents lost their jobs after the war. At the same time, there's been the development of a nouveau riche class that has bought up companies and the media. To shift the blame away from the glaring redistribution of wealth and the injustice of it all, the nouveau riche fuel their hate on supposedly weak targets, such as gay and lesbians.

SPIEGEL ONLINE: Is political and economic change the most important thing when it comes to improving the position of minorities in the Balkan states?

Dragojevic: Absolutely. I have high hopes for a new socialist revolution. It will start in Greece. The year after that, it will be our turn. During the Cold War, the former Eastern Bloc states were kept hostage. Now people recognize that they are no better off under capitalism. That will have consequences. That's one reason why my next film will be a Marxist thriller, an adaptation of Julian Barnes' "The Porcupine" (ed's note: a 1992 novel about the trial of a fictitious socialist head of state).

SPIEGEL ONLINE: Is it easier to make a Marxist film than a gay-friendly one? The financing of "Parada" was apparently very complicated.

Dragojevic: That was also the case with "The Porcupine." I actually wanted to make the movie in 2004, but it wouldn't have worked at that time. At that time most people felt that liberal capitalism would fix everything. There's been a general rethinking of that since the financial crisis, and support for my project grew.

SPIEGEL ONLINE: With Limun you've created a very ambivalent character. He's a war veteran and brutal macho man, but despite this he is able to function as a role model. How do you explain that?

Dragojevic: Like so many of us, he's one of the losers of the revolution. He was recently a war hero. Now he works at a rundown security firm and is responsible for clearing out a Roma camp. Many people can identify with this downfall. On top of that he's a romantic hero: Out of love for his wife, he decides to stop hating gays and provide security for the gay pride parade.

SPIEGEL ONLINE: Many left-leaning critics accuse you of not going far enough. For example, you don't show the gay couple Mirko and Radmilo kissing.

Dragojevic: If I had shown a kiss, I would have alienated thousands of potential viewers. But we showed enough intimacy and tenderness between the two in the movie that it's clear that these two are lovers. Besides, I'm a shy person who doesn't like to show any explicit love scenes, even between heterosexual couples.

SPIEGEL ONLINE: But in other respects, you don't hold back, and sometimes you actively embrace clichés. For example, when you show Radmilo drinking tee, he automatically holds his pinkie out in a camp fashion.

Dragojevic: For me, clichés are very close to archetypes, ancient images that humans have created of themselves. As a trained clinical psychologist, I believe you can exploit these archetypes and use them, in the sense of positive manipulation, to dispel stereotypes. Incidentally, playing around with clichés is a technique that was already used by Shakespeare and Molière.

SPIEGEL ONLINE: The film ends with a very dramatic scene and a disturbing statistic: At the 2010 Belgrade gay pride parade, there were 5,600 police protecting demonstrators from 6,000 hooligans. Despite this, more than 200 people were injured. In the light of such shocking numbers, why did you decide to make "Parada" as a comedy?

Dragojevic: As a director, I wasn't interested artistically in a drama about the difficult situation of a gay couple in Belgrade. But it was a conscious decision. If I'd made an art house drama I would have shoved the film into a self-made ghetto. That's exactly what I didn't want. Therefore I made a film for homophobes with a funny, but clear, message.