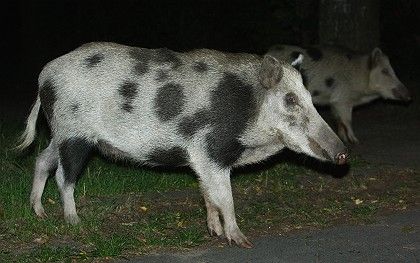 Zoologists have called them Germany's "most dangerous animal." And while wild boars have been terrorizing the German countryside for centuries, in recent months their comfort zone has expanded, with city centers now also falling under their reign of destuction.

This year alone, boars chased a pair of policemen onto a balcony in a suburb of Frankfurt, sent a pensioner to the emergency room in Berlin, and broke into a home improvement storebefore being shot to death at the checkout counter in North Rhine-Westphalia.

None of these earlier skirmishes, however, resulted in loss of non-boar life. Now the stakes are getting higher.

An unlucky hunter, a married 72-year-old man from Berlin identified only as Jürgen C., was not alone when he met his untimely end. He was part of a five-man hunting party that joined forces in order to dispatch a wild beast spotted feasting on maize in a cornfield near the village of Linthe, 70 kilometers outside Berlin.

At first, the hunters seemed to have the upper hand. According to 53-year-old hunting partner Ehrhard H., it was Jürgen himself who first managed to shoot the boar in one of its legs, but the creature was able to dash back into the cornfield.

Then Ben, the group's hunting dog, was sent to pursue the hog, followed close behind by hunter Torsten P. This time it was the boar who scored a hit. According Ehrhard, the remaining hunters heard a cry before seeing Torsten limp back to the group with a wounded shin.

At this point Jürgen, armed with 45 years of hunting experience, decided he would launch his own pursuit. "It was getting dark and we didn't even realize that Jürgen had gone back into the field," Ehrhard told the German tabloid Bild. "Then suddenly we heard a scream for help."

But by the time Jürgen's friends found him, he was lying on the ground bleeding heavily from his knee. They called an ambulance but it was too late. The boar warrior had punctured a major artery and the 72-year-old sportsman bled to death.

The hunting party ultimately found the boar and shot it. The corpse of the murderous beast is now being kept in a refrigeration room not far from the scene of its struggle.