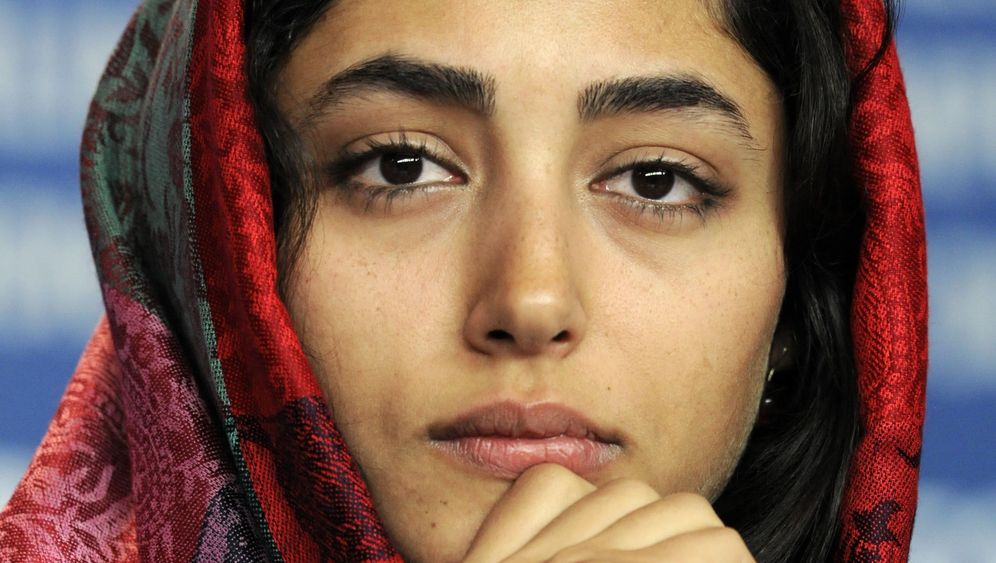 Anything actress Golshifteh Farahani does can become a political issue -- what she says, where she shoots her films, with whom she works, with whom she doesn't work, whether she wears a headscarf or not. Hardliners in Tehran could conceivably even take it as a provocation that Farahani chooses to meet SPIEGEL for an interview at the cafe in Paris' Hotel Amour -- a hotel that was once a brothel.

But for Farahani, freedom means no longer having to constantly consider how the things she does might be judged by the morality police in her homeland of Iran. Farahani, 30, is her country's most famous actress. She's known in the West for a role opposite Leonardo DiCaprio -- and for the way she's fallen from the favor of the Iranian regime. She has been living in exile in Paris for four years now, just a few streets away from the Hotel Amour, which these days is a popular meeting spot for locals and tourists alike, including Farahani, who is a regular here.

"I don't want to be a political figure," Farahani says. "I hope I'm not one." Then she relates stories of secret police interrogations in Tehran, of being offered a role that caused a brouhaha at the US State Department and of a career that in recent years has taken her around the globe -- to New York, Los Angeles, Berlin, Cannes, Venice and Morocco, but no longer to Tehran, where her parents live. Going there would be too risky.

Golshifteh Farahani looks like a model and speaks like a civil rights activist with nothing to lose -- eloquent and passionate in her nearly perfect English. She only wears a headscarf now when a role calls for it, for example in the film adaptation of "The Patience Stone," which came out this month in German cinemas after making the international festival circuit.

Set in Afghanistan, the film is essentially a one-woman show, a manifesto told in gorgeous images. Farahani portrays a mother of two caring for her injured husband. The man, much older than her, lies on a mat in their home with a feeding tube running from a plastic bag to his mouth. He is unconscious, left in a coma by a bullet to the neck, but his eyes are oddly wide open. Gunfire can often be heard outside the house.

"Can you hear me?" the woman asks her husband. There's no answer, but she continues to talk. "I've had enough of praying," she says. She talks about herself, about him, about their marriage when she was 17, about her secret wishes and desires, about sex, about all the things that remain unsaid in many relationships, in the West too.

A silent man and a talkative woman -- some Europeans with a bit of life experience might see this as the basis for a happy marriage, or at least the stuff of a successful comedy. But in Afghanistan, a woman can end up in mortal danger for opening her mouth.

Atiq Rahimi, director of "The Patience Stone," was born in Kabul and now lives in Paris. He also wrote the novel on which the movie is based, for which he was awarded the Prix Goncourt, France's most important literature prize, in 2008. Rahimi had doubts at first about casting Farahani. "Her beauty initially gave me cause for concern," he says, concern that the story "would become secondary."

"That's meant as a joke," Farahani asserts. "He couldn't imagine me as a woman suffering."

Farahani has always fought for what she believed in. As a student, she spearheaded a protest because her school was unheated. At 16, she cut off her hair and dressed in boys' clothes so she could ride her bicycle through Tehran. Farahani comes from an artistic family, with a father who is a theater director and a mother, sister and brother who all act or direct. "There was just one profession I wasn't supposed to pursue -- acting," Farahani says, laughing.

Her family wanted her to be a musician, a pianist. She attended the conservatory in in Tehran, practicing Mozart, Schubert and Bach -- "Preludes and fugues, pretty difficult stuff," as she says. She also spent a year learning German, in preparation for studying in Vienna. But shortly before she was due to depart, at age 17, Farahani told her parents she had different plans.

She had already defied her father's ban on acting by taking a role in a film when she was 14. By her early 20s, she was married and acting in one Iranian film after another. Some of these films were banned in the country, but that only made them more popular on Tehran's DVD black markets and at international film festivals.

The film that would change Farahani's life was "Body of Lies," a Hollywood thriller with British director Ridley Scott ("Gladiator") at the helm and Russell Crowe and Leonardo DiCaprio in the leading roles. Scott was looking for a young actress from the Middle East to play a large supporting role, as a nurse with whom DiCaprio's CIA agent falls in love.

A couple weeks later, Iran's authorities having been surprisingly cooperative, Farahani sat waiting in Los Angeles. She didn't have the role just yet, but if she got it, she would be the first Iranian actress to work for a Hollywood studio since Iran's Islamic Revolution in 1979 and the subsequent US Embassy hostage crisis. Her case put the managers of Warner Bros. on the spot, since the American embargo against Iran technically prohibited such a collaboration.

But Scott stuck by Farahani. The studio consulted with the State Department, and eventually a compromise was found, with Warner Bros.' London branch signing Farahani's contract. Shooting took place in Morocco, including a scene in which Farahani, without a headscarf, sat next to DiCaprio by the shore of a lake and stroked his hand, thereby taking leave of her good Muslim upbringing.

That sequence isn't included in the movie, in which Farahani is always seen in either a headscarf or nurse's cap. But an online trailer for "Body of Lies" included a couple of seconds of footage showing Farahani without a headscarf. For some of Iran's morality police, that was grounds enough to stage a scandal.

Farahani was headed to London, this time for a Disney production with the fitting title "Prince of Persia." But at the airport in Tehran, authorities confiscated her passport, citing a court file they said existed on her.

That was the start of "a nightmare," Farahani says. She was repeatedly summoned to interrogations with the court and with the secret police. What was she doing with the "Great Satan," the United States? Was "Body of Lies" CIA propaganda? The accusation that she had compromised national security hung in the air.

"You can be hanged for that, just like that," Farahani says. Whenever she was called in for questioning, she first put on two pairs of underwear, one over the other, because, she says, "In case I was locked up immediately, at least I would have had a change of underwear." Her husband would wait in front of the building to make sure she came out again.

Meanwhile, the filming in London took place without Farahani. At the advice of an employee of the Iranian regime, she filed a complaint against the court, saying Iran had been harmed because her role went to an Israeli instead. In reality, the part went to Gemma Arterton, who is English.

The interrogations dragged on for seven months. In the meantime, Farahani filmed "About Elly" under the direction of Asghar Farhadi, who would later win the 2012 Oscar for best foreign film, for "A Separation." Iran's Ministry of Culture ordered Farhadi not to cast Farahani, but she got the role.

Walking the Red Carpet with a Tense Smile

"About Elly" won a Silver Bear at the 2009 Berlinale. Farahani, as its leading actress, walked the red carpet at the festival with a tense smile. Shortly before, a judge had taken pity on her and urgently advised her to leave Iran.

Since then, Farahani has lived in Paris. Her Iranian passport has expired and she now holds French identification documents. Her marriage fell apart in exile, but her career took off.

Farahani filmed "Chicken with Plums," written and directed by fellow Iranian exile Marjane Satrapi, at Germany's Studio Babelsberg. "The Patience Stone" was filmed in Morocco, with only a few streets scenes shot in Afghanistan, using a body double hidden under a burqa.

Farahani can pick her roles at this point, and whether by chance or not, these often end up being in films about rebellious women in Muslim countries. She filmed "My Sweet Pepper Land" -- a modern-day Western that premiered at Cannes this May, in which Farahani plays a teacher -- in the Kurdistan region of Iraq. In "Little Brides," she portrays an employee of an aid organization working to help girls in forced marriages in Yemen.

And of course Farahani closely follows what happens in Iran. Yes, she says, the country's new President Hassan Rohani gives her cause for optimism, but she cautions that the change supposedly taking place in Iran may just be a strategy. "Look at his predecessors: Rafsanjani, Khatami, Ahmadinejad -- always this alternation between oppression, easing, oppression, now easing again," she says. "It's the religious leader who holds the true power."

Iranian authorities likewise take note of what Farahani does. After she bared her right breast for a fraction of a second in a promotional video for the Césars, France's national film award, her parents received a call from a man claiming to represent the Islamic republic's judiciary, who threatened to cut off Farahani's breasts in retaliation.

"I don't believe I could live in Iran again," Farahani says. "A tree, once uprooted from the earth, is very difficult to plant again."

Farahani's greatest weapons are her films. She recently took part in another American production, "Rosewater." The directorial debut of Jon Stewart, the most important TV host among left-wing Americans, this film tells the story of a journalist who is imprisoned and brutally interrogated. The film is set in Iran.