Wearing a knitted cardigan and crooning into his microphone, Barack Obama paces around the stage, wooing Michelle with a love song. In another number, now clad in a suit, Jimmie Wilson who plays Obama, struts up and down, clasping his mike and leading a euphoric gospel chorus of "Yes We Can." 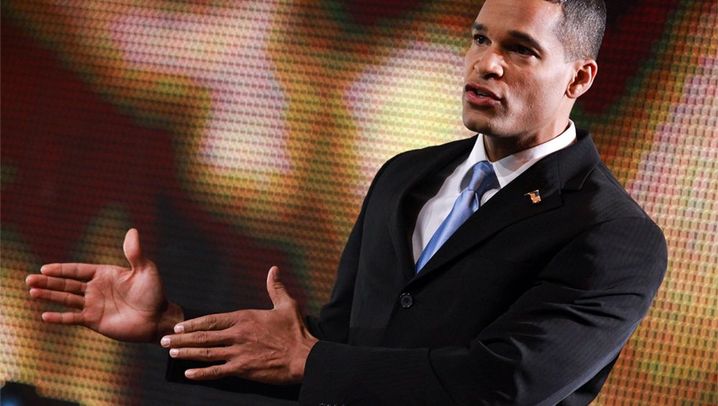 These two scenes are part of an unusual new musical called "Hope!" which is to premiere in Frankfurt on Jan. 17. The production, the biggest of its kind, is an all-singing and all-dancing take on the US president's victorious campaign in 2008.

"I had the initial idea right at the start of Obama's electoral campaign," American writer and composer Randall Hutchins told SPIEGEL ONLINE. "I found the atmosphere exciting and that was my inspiration. People hoped change would result in a better life. It was a beautiful, very social time."

As well as charting Obama's political career, the plot follows a group of residents in an apartment-sharing community. There is a politically disillusioned unemployed Puerto Rican, an ultra conservative widow of German origin and a committed African-American political activist.

During the course of the performance, they all become infected by Obama's message of change. "People from a variety of backgrounds and political camps are united by their hope for a new start," a press release about the show explains.

A number of top politicians are given a show-biz makeover and feature in the show. Among them is John McCain, who is played by the German singer David Hanselmann, and there's also an appearance by Hillary Clinton, who looks a couple of decades younger.

Sarah Palin also has her own solo, surrounded by a troop of scantily clad dancers. Much of the script is taken from political speeches and statements, writer and composer Hutchins said. The songs and texts are mostly in English, often with a German translation.

The actors are frequently more youthful than their political personalities and Patrick Strese from Move Gmbh, the German company behind the production, stressed it had been a hard task to cast the key roles.

"We had some trouble finding Obama but then we found Jimmie Wilson and that worked well," he said, refering to the actor who had his first major lead role in "Sisterella," a musical produced by Michael Jackson. "We took into account the appearance of the performers to get that likeness, but their musical ability was essential too."

This is not the only performance to fuse rock, pop and rap to tell Obama's story. Last March a small theatre in London staged "Obama On My Mind," a musical performance, written by Teddy Hayes.

Around two thirds of the tickets for the Frankfurt performance have been sold already, event organizers say. And the estimated 2,000 spectators will be in for an active evening. More than half of them will be allocated specially designed seats which incorporate a small drum to play along to the songs. Other audience members will be equipped with shakers.

The show will take place in the Jahrhunderthalle in Frankfurt am Main. Tickets are priced at between €42 and €151 ($60-$216). After Frankfurt, it is set to tour Germany and its organizers are currently in talks about a future US tour.

But despite complaints on the Internet that this is yet another a rose-tinted portrayal of the president, event organizers stressed that Obama is not being idealized by this glittery take on his ascent to power. "In no way does 'Hope!' show Obama as a saint," the press statement said. "This grants us a view behind the scenes of his comet-like rise and also tells of his personal ups and downs."