The old plane used to carry former East German officials like Erich Honecker through the Cold War-era skies. Now, though, it is set to become a luxury hotel in the Netherlands. 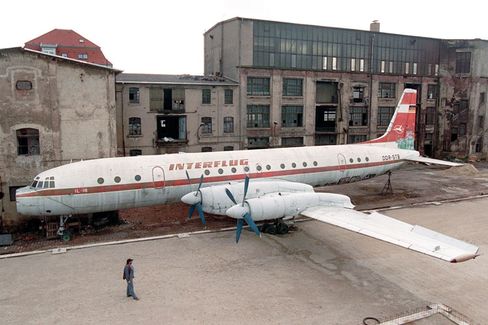 A plane similar to this one will become a hotel in Holland. The plane in the picture is on the grounds of a former factory in Leipzig.

Dutch entrepreneur Ben Thijssen is transforming the four-engine propeller plane into five-star lodgings, including a whirlpool, sauna, bar, kitchen, flat-screen televisions, and wireless Internet. He has invested €450,000 ($635,000) in the process.

The airplane will host its first guests this summer at Teuge Airport near Apeldoorn -- just east of Amsterdam -- Dutch newspaper De Telegraaf reported last week. Located right on the airfield, guests can watch other planes take off and land. "I wanted to situate the plane in its natural environment," Thijssen told SPIEGEL ONLINE.

The 40-meter long suite costs €350 a night for two people and can host as many as 15 for a conference meeting.

Built in 1960 in the Soviet Union, the plane was used by Honecker and other officials for a few years in the early 1960s. At the time, Honecker was not yet East Germany's leader -- he served as a secretary in the National Defense Council and was involved in the building of the Berlin Wall.

The plane served as an aircraft for the East German airline Interflug -- flying to places like Cuba, Russia, China and Vietnam -- after its stint as a governmental plane. It was retired in 1988.

Although the cabin has undergone a complete makeover, the original cockpit will remain intact, Thijssen said. "Erich Honecker often flew with this airplane," he told the Dutch daily. "In the cockpit, there is a seat for a Stasi agent who always had to make sure that they were keeping to the right course and flight plan," he said, referring to the East German secret police.

The businessman said he discovered the scrapped Ilyushin Il-18 -- one of the Soviet Union's most popular and widely-used airliners -- in the village of Harbke in the German state of Saxony-Anhalt. The plane had long been used as a restaurant in the town near where the border between East and West Germany used to run. The restaurant's owner was retiring and wanted to sell it.

"I bought it immediately for its scrap value of €25,000, because I have waited for an opportunity like this for a long time," said Thijssen, who first had the idea for an airliner-turned-luxury-suite seven years ago. "It took me years to find a suitable plane."

Thijssen expects the popularity of his "Honecker Hotel" to soar. "The Dutch like crazy sleeping accommodations," he said.