When Tutankhamen died, his tomb was filled with all manner of precious objects, including two folding chairs. The more attractive one is made of ebony and has ivory inlays.

Such ingenious chairs were already being used in Egypt more than 4,000 years ago. The brilliantly simple design consists of two movable wooden frames connected to each other with pins and with an animal hide stretched between -- a kind of ur-camping stool.

It isn't surprising, given the advanced nature of their society, that the Egyptians were familiar with such comfortable seating. Astonishing, however, is that the gruff chieftains of northern Europe also sat on such chairs.

Some 20 Nordic folding stools have been discovered so far, most of them north of the Elbe River in Germany. The majority were found by mustachioed members of the educated classes, who burrowed into their native soils in the 19th century in search of "national antiquities." The wood had usually rotted away, leaving only the golden or bronze clasps, rivets and knobs.

The only complete specimen was found in 1891 in Guldhøj (Golden Hill) near Kolding on the Jutland peninsula, which forms modern-day mainland Denmark. The chair, made of ash wood and with an otter-skin seat, was found lying in a tree-trunk coffin. Dendrochronologists have dated the specimen, made by a local carpenter, to 1389 B.C.

But folding chairs clearly originated in the Orient. The oldest depiction of one is found on roughly 4,500-year-old Mesopotamian seals. Egyptians were also familiar with folding chairs at any early date. Dignitaries used them as mobile thrones, and the long stretchers at their bases prevented the chairs from sinking into the sand.

The fact that the design reached so far north led many scholars to posit that northern Europeans developed it independently and in parallel to the Egyptians. But that view has now been challenged. "The design and dimensions of the chairs are too similar," says Bettina Pfaff, an archaeologist from Nebra, near the eastern German city of Halle, who specializes in prehistory. Her colleague Barbara Grodde also finds that there is "a remarkable similarity" between the Egyptian and Nordic models.

In other words, Pfaff says, "they were copied." This, in turn, presupposes that there was contact between sunny Egypt and the swampy North some 3,400 years ago.

Other evidence for such contact has also turned up. In recent years, archaeologists have discovered how far-reaching the trade network had already become in the Bronze Age. Blacksmiths from Germany's Harz Mountains worked with gold from Cornwall, while others imitated Mycenaean swords or looped needles from Cyprus.

"The elites throughout Europe were in communication at the time," says Bernd Zich, an archaeologist from Halle, adding that luxury goods were exchanged across great distances "usually on foot."

A Sudden Fashion Craze in the North

Such goods were apparently passed on from tribe to tribe and from region to region in a type of relay. But things were somehow different with the folding chairs. While they were used in the Orient and the far north, none of these folding chairs have been found in a wide swath of land between the two regions, either among the inhabitants of stilt houses in the Alps or among the Bronze Age residents of Italy and France.

Is it possible, then, that a northern trader made the long journey from the Baltic Sea to Egypt, stole the design and brought it back home? As farfetched as the idea might seem, it is certainly plausible. Archaeologists have recently concluded that there were long-distance scouts more than 3,000 years ago who brought tin from Germany's Erz Mountains all the way to Sweden. They probably traveled in oxcarts on dirt roads. Such ancient caravans probably also traveled along southern routes heading toward Africa.

Scholars are also determining the dates of such knowledge transfers. Egypt became a major power under Thutmose III (1479 to 1426 B.C.), whose armies reached the borders of modern-day Turkey. This changed the flows of goods. Even the Greek mainland fell under the spell of the pharaohs.

It was precisely at this time that a messenger from the North Sea coast could have been in Egypt and copied the chair's design onto papyrus. Starting in 1400 B.C., the stools started being made in the far north and abruptly became fashionable. It appears that every prince of the moors was suddenly determined to have one of the new thrones from the south.

Craftsmen copied the exotic chairs down to the last detail. They often used oak or ash for the frame. A particularly fine piece discovered in Bechelsdorf, in the northern German state of Schleswig-Holstein, has elaborate ornamentation, with decorative metal tassels that chime and a deerskin seat.

For Clan Leaders or Sorcerers?

Many speculate that the furniture belonged to clan leaders entitled to an elevated position while traveling. Although the stool was only about 25 centimeters (10 inches) high, it would be high enough since everyone else would be forced to sit cross-legged on the ground.

But not all find this theory convincing. The objects were often discovered in "poorly furnished graves," explains Pfaff, the archaeologist. Instead, she believes the strange pieces of furniture belonged to a "spiritual elite" that was "not necessarily wealthy," such as healers and magicians with a connection to the world of spirits.

The man from Guldhøj could have also been one of these sorcerers. Apparently afraid of the dead, those who buried his body placed one of his own shoes under his head. In this way, Pfaff says, the corpse "could no longer climb out of the grave." 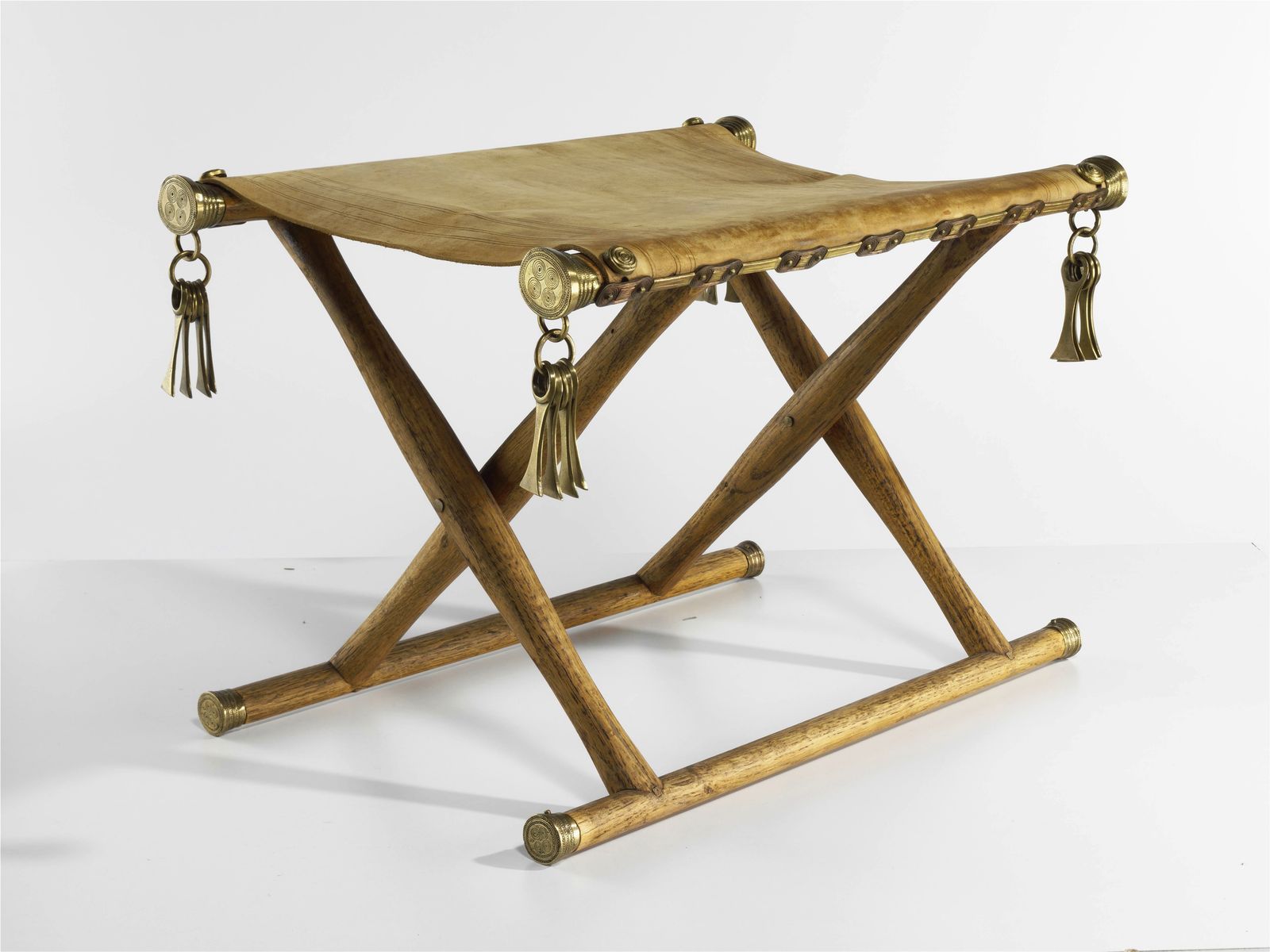