Daphne Fernberger has been awfully tired lately. On some days, she says, it's hard to get up and go to a ballet class where she exerts herself to her limit. Yet those are also the days that teach her what truly matters in life.

"Staying positive is essential. You have to stay positive," she says, with a laugh, as if she is embarrassed by such an earnest pronouncement. The tired days, she quickly adds, are rare. "I'm happy to be the dancer I am," she says, "and not to be another."

Fernberger is squatting on the floor of a dance studio at the Juilliard School in Manhattan, one of the world's most prestigious music, theater and ballet schools. Next to her is a backpack, a rumpled folder and a pair of toe shoes, which once were pink. Morning sun streams through the windows. From the hallway comes the muffled sound of Bach.

She sounds like a veteran of the business, a hardened prima ballerina. She talks of the days "when I was younger," and says she feels "older" and "mature" now. "Fear," she says, "is just an inhibiting feeling." 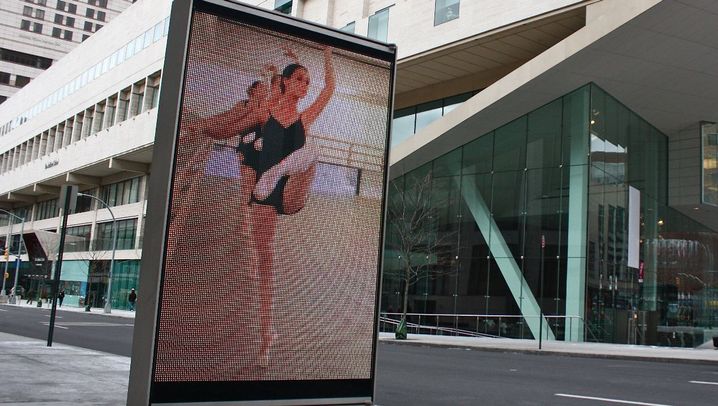 These are words of wisdom, but they are coming from the mouth of a child: Daphne Fernberger is 18 years young. A native New Yorker, cheerful, petite, with huge eyes, she's currently working her way through her first year at Juilliard, where she is majoring in ballet.

The school year started in September, yet she already comes across like a professional. "I certainly feel more grown up," she says. "I know myself better. I have a sense of security in being who I am."

In the Footsteps of Pina Bausch

Fernberger is one of more than 800 students from 47 countries at Juilliard this year dreaming of an international career as a dancer, musician or actor. The school is located next to Lincoln Center and its Metropolitan Opera House, and the ballet students hope one day to follow in the steps of legendary Juilliard alumni: Pina Bausch, Robert Battle, Paul Taylor, and Martha Clarke.

It's a hard school, with hard-driving students. "You're aware of the competition," Fernberger says. "But it's not overwhelming."

Competition is what the ballet world is mostly made of, or rather, known for. Rivalries, despotic choreographers, wicked ex-ballerinas pushing their daughters to chase their own, long-lost dreams -- those old clichés never die. They are there to be seen in "Black Swan," the ballet film and psychological thriller that is currently wowing cinema audiences around the world and raking in the awards.

In "Black Swan," Natalie Portman plays a prima ballerina eaten up by such extreme narcissistic paranoia that things don't end well. For inspiration, director Darren Aronofsky visited Juilliard. "It's a movie, of course," Daphne Fernberger says with a giggle. "Sure there's competition, but not like that."

'That First Drop of Blood'

Fans love the ballet myth of blood, sweat and tears. "The stage is not magic for me," the famous Canadian dancer Lynn Seymour wrote in her memoir, "Lynn," in 1984. "I always felt the audience was waiting to see that first drop of blood."

And, although the dancers can compete fiercely for the few coveted star positions, the only thing bleeding so far for Daphne Fernberger are, occasionally, her toes.

The daily routine of an up-and-coming dancer indeed doesn't much differ from that of any other student -- hard work, little sleep and much naïve optimism. There's little time for the jealousy or self-destruction seen in "Black Swan," especially since the students, for now, remain sheltered by the cocoon of their school. That lasts for four years, and then they are released into the wild beyond.

Fernberger's day begins at eight with breakfast in the cafeteria, an elevator ride from Juilliard's dorm where all of the freshmen live. Even though she was raised in New York, living in the heart of Manhattan, with Lincoln Center across the street, is, Fernberger says, "fantastic."

Classes start at 9 a.m., either English or music. After that there's ballet for two hours, followed by lunch, more classes (technique, composition, classical, Jazz) and rehearsals, which can stretch into the evening. It's a repetitive routine, far from the glamour presented by Hollywood's many ballet films, such as "The Red Shoes," "The Turning Point," or "The Company."

It is tough work, and soon they are panting from the exertion, with sweat stains spreading across their leotards. Still, they laugh, squeal and cheer. Whenever someone performs a movement particularly well, most of them applaud encouragingly.

"The older you get, the less competitive it gets," says Fernberger, collecting her things later. In the beginning, it had all been about being better, higher and faster. Now her priorities have shifted. "You have to realize the important thing is to be focused on yourself and motivated by yourself, not by your peers," she says.

Fernberger has been dancing since she was five. But she only started taking it seriously in third grade, after a teacher paid more attention to another student than to her. Fernberger was jealous. She had always loved getting attention, so she vowed to try her best -- for the first time.

And attention she got. Soon she was asked to join the Jacqueline Kennedy Onassis School, a pre-professional ballet training program for students ages 10-18, and run by the American Ballet Theatre. She was the only one in her graduating class to be accepted at Juilliard.

But it was an expensive dream: The academic year, spanning nine months, costs students almost $49,000 (€35,000) in tuition, room and board. Fernberger's parents have pitched in.

Her first year at Juilliard has been "extremely challenging," as she puts it diplomatically. The students have been pushed from the start, and have been tasked with choreographing their own dances, which they will then perform in front of an audience at one of Juilliard's five theaters.

On a recent afternoon, the freshmen were rehearsing a piece to music by Philip Glass, which would premiere that evening as part of a big ballet performance, at which each Juilliard class will do one dance.

This particular choreography, Fernberger explains, is very personal to the students. "It's really about us, the co-dependency between us and how we help support each other, and are there for one another," she says. Art imitating life.

Dress rehearsal is at the Peter Jay Sharp Theater, one of the many stages within the enormous Lincoln Center complex, and a stone's throw from the Met. Fernberger and her classmates don't appear tense. They sit backstage in their dressing rooms, chatting, giggling and applying makeup like professionals.

The auditorium itself is awe-inspiring, with its orchestra level and balconies ready to hold up to 1,000 audience members. Yet Fernberger coolly takes the empty stage as if she were born there, and warms up, stretching, bending, her face in rapt concentration. She looks much older now than 18.

Is she hoping for fame one day? "I think to be famous is a silly goal," she states unequivocally. "Fame is a byproduct of your work."

Still, fame is approaching fast. Already, Fernberger has performed in a music video and an episode of the TV series "Law and Order: SVU." It was a role with no lines, as the body double of a starring actress, but Fernberger says the acting should help her dancing in the future.

The dress rehearsal goes well. When it's all done, the teachers in the auditorium and the students on stage cheer one another on. Fernberger's face softens, and suddenly she is the 18-year-old once again.