Knut the celebrity polar bear has been through a lot in his young life. First he was abandoned by his mother. Then animal rights campaigners reportedly called for him to be put down rather than face an unnatural childhood being hand-reared. 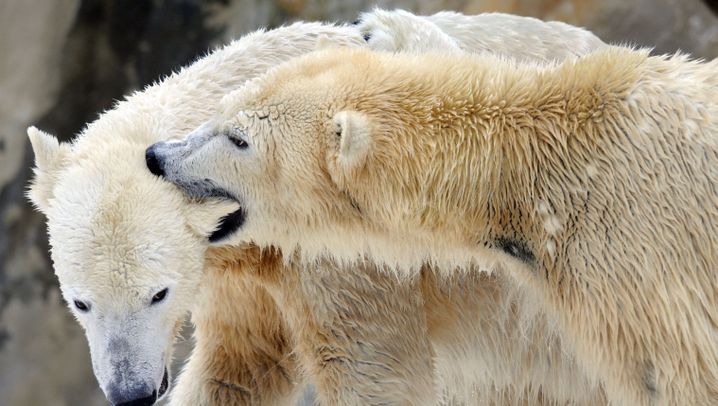 Photo Gallery: Knut and His Girlfriend

By the time he was three months old, he faced the stresses of global superstardom as hundreds of thousands of fans queued up to see him play with his keeper, Thomas Dörflein, and camera crews from around the world covered his every move.

Then came the loss of fame as he grew and became steadily less cute. As if that weren't painful enough, the man who raised him, Berlin zookeeper Thomas Dörflein, died in 2008, and rumors abounded that the young bear would be moved away from his home in Berlin to some unknown, unfamiliar location.

Things finally started looking up again last year for Knut, when he was introduced to a female companion, Giovanna, a tempestuous polar bear brought over from the Munich Zoo while her enclosure there was being renovated.

Knut seemed to have found an equilibrium, a bit of peace, away from the media spotlight, and in the company of a furry friend of his own species.

And now this. The animal rights group PETA has demanded that he be castrated. The zoo expert of PETA's German operation, Frank Albrecht, said on Tuesday that Giovanna and Knut had the same grandfather and that they would be inbreeding if they produced offspring.

"Knut fans should be aware that only Knut's castration would allow a long-term cohabitation of Giovanna and Knut. All other hopes and desires would bring the polar bear population in captivity to its pre-programmed demise even more rapidly," Albrecht said in a gloomy statement.

Inbreeding, Albrecht said, would do severe damage to efforts by zoos to keep the polar bear species alive. "It reduces the genetic diversity, and there's a danger of inbreeding depression with future offspring." Polar bears are endangered in the wild because global warming is reducing their sea ice habitat.

PETA, short for People for the Ethical Treatment of Animals, reiterated its call for German zoos to stop keeping polar bears because there were "massive problems" involved in holding the animals in captivity.

Knut fans have been campaigning for Giovanna to stay at Berlin Zoo with Knut rather than return to Munich because the two have been getting on well after a rocky start when she swiped him on the nose.

Berlin Zoo's bear expert Heiner Klös did not even grace PETA's demand with a comment. "I'm not saying anything about that," he told SPIEGEL ONLINE. "We've always said Giovanna will only stay here until her enclosure is ready in Munich." She is due to return home in the summer. That would leave Knut alone once again, but with his crown jewels intact.