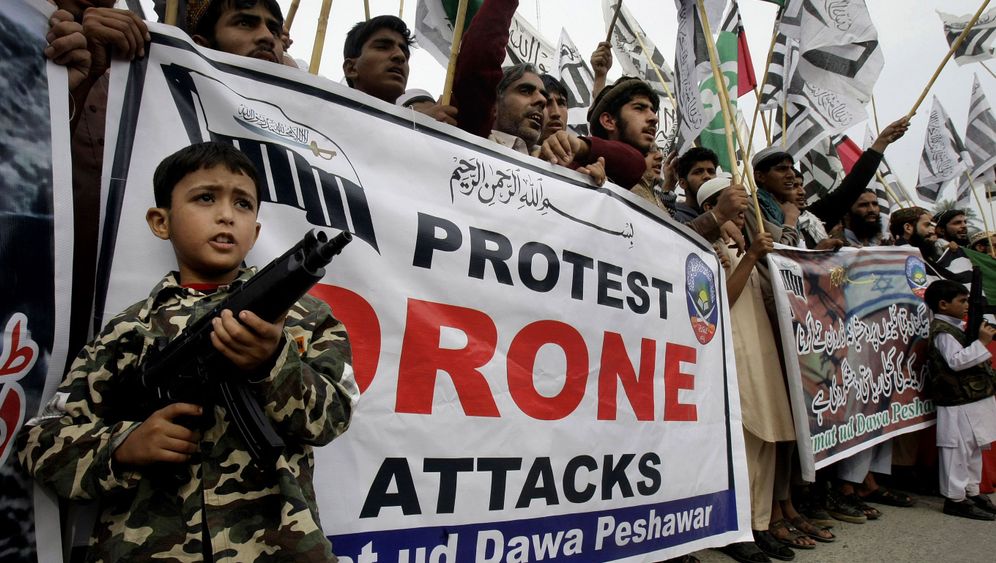 Intelligence operative Mohammed Hassan (*) cancelled prearranged meetings several times. He called us from a different phone each time, never offering a reason, merely saying: "I unfortunately can't make it." But then he suddenly turned up in a small, inconspicuous hotel in Karachi. A short man with a salt-and-pepper beard, Hassan arrived wearing a white turban and a white shalwar kameez, a knee-length shirt and cotton pants. Hassan works for the CIA.

He provides data and information for the Americans' drone missions in the Pakistani tribal regions along the border with Afghanistan. He lives there and is of Pashtun ethnicity. He says that he has decided to talk because if he didn't, he would drive himself crazy, and because the whole world is critical of the drone attacks -- and in his perception, this makes the world critical of his actions, too. "However, I feel that this weapon is the right tool in the fight against extremists," he says.

He is opposed to talks with the Taliban, which the Pakistani government supports. "What can you talk about with these kinds of people? About their share of power?" According to Hassan, the Taliban want an Islamic state according to their convictions, one with no roads, no schools, no music, no art and no enjoyment of life. "Nothing but pray, pray, pray. It has nothing to do with modern Islam." He fears that chaos will ensue if the Americans end their drone missions in Pakistan, because it will descend into a dog-eat-dog struggle for power.

But he is also plagued by the fear of being discovered and murdered by the Taliban. He's asked us not to print his real name or his real profession, or even identify the part of the tribal regions where he lives. He says that he can only speak openly under these conditions. He has brought along photos of meetings with Taliban commanders, as well as documents that he says serve as proof of his access to important information.

SPIEGEL: You don't exactly look like a US spy.

Hassan: What did you expect? We Pashtuns look like Pashtuns. Just because I have a beard and dress the way we tribal people happen to dress doesn't mean that we're Taliban. There are also reasonable people among us.

SPIEGEL: You pass on information to the American intelligence agency, the CIA, which it uses to kill your countrymen with drones. You call that reasonable?

Hassan: We are at war, and I am part of this war. When does a war make sense? To be honest, I think the US drone missions are the right thing to do. Believe me, no weapon is more effective in fighting extremists. Hakimullah Mehsud, the head of the Taliban for many years, was killed on Nov. 1. Many other more or less high-ranking extremists were killed before that. From a military standpoint, it's a success for the United States. And I contribute to that success.

SPIEGEL: The Pakistani government and the army complain that the US attacks are a violation of Pakistani sovereignty.

Hassan: What sovereignty? The nation of Pakistan has had no control over the tribal regions for decades. The military has a few barracks there. They are well-guarded fortresses, and the soldiers hardly dare to step outside. Pakistani law doesn't apply in the tribal regions, neither the constitution nor any other law. Tribal rules are all that counts. The Taliban claim that they are very effective. But I think they're more primitive than anything else. However, I understand that Pakistani politicians and generals have to make a public show of being opposed to the drone attacks.

SPIEGEL: You are alluding to the idea that the government secretly endorsed the missions, as indicated by the US embassy reports published by WikiLeaks.

Hassan: Pakistan is a conservative society. The majority do not accept the US's drone war. They believe the protestations of the government in Islamabad, that the Americans are violating our sovereignty. For them, it is also unacceptable that Washington is killing Muslims in Pakistan, that is, their sisters and brothers in the faith. That's why those who are in charge in Pakistan have no choice but to publicly distance themselves from the drone attacks.

SPIEGEL: How do you respond to accusations that the attacks are primarily killing civilians?

Hassan: That's nonsense, pure propaganda. The Bureau of Investigative Journalism in London estimates that a total of 2,534 to 3,657 people have been killed in 379 drone attacks since 2004, including between 416 and 948 civilians. What's this supposed to be, a guessing game? It seems to me that these imprecise figures are made up out of thin air. Most of the estimates are based on Pakistani newspaper articles, which in turn are based on information from people in the tribal regions that cannot be verified. From my own experience on the ground, I can say that yes, there are civilian casualties, and unfortunately they include women and children. But they make up a very small share of the total. I have no concrete figures. Does anyone seriously believe that America would wager a costly, politically sensitive war in Pakistan to kill civilians? Most of the victims are enemies of the United States and enemies of Pakistan.

SPIEGEL: Are you to blame when there are civilian casualties, because you have passed on incorrect information?

Hassan: There is of course the risk that mistakes are made. And it has apparently been the case that people have tried to denounce their enemies -- in the hope that the Americans will kill them with drones. But those are exceptions, which I am only aware of from hearsay. The fact is that when a target is selected and there are people in the immediate vicinity, they die as well. After all, a drone doesn't select a single person from a group. For instance, when a Taliban commander goes to a village, people are curious and come out to greet him. If a drone strikes at that moment, it also hits people who have nothing to do with the Taliban. At least the constant threat of drones has led to the extremists becoming more and more socially isolated. And that's a success.

SPIEGEL: Do you have a guilty conscience?

Hassan: No. What would be the alternative to a drone war? A military operation by the Pakistani army or, God forbid, an invasion by the Americans. Then there would be many, many more deaths.

SPIEGEL: Do you do this work for the money?

Hassan: Of course, to some extent. But I am also deeply convinced that I'm doing the right thing.

SPIEGEL: Exactly how much are you paid? And what kind of information do you provide?

Hassan: An average of $200 (€147) a month. That's a lot of money in my part of the world. It isn't my primary occupation. I provide information about everything I see and believe is worth reporting. Information about foreigners who turn up here, about places where meetings are held, things like that.

SPIEGEL: To whom do you provide the information?

Hassan: To middlemen. Pakistanis. Let me put it this way: The Pakistani side is also involved.

SPIEGEL: Are you afraid of being caught?

Hassan: Yes, I am afraid. The Taliban know that someone has to be passing on information. There is a special unit whose job is to expose spies and punish them. Even someone who is suspected of being an informant has a problem. When a spy is exposed, he is shot to death or blown up. The last few minutes before the execution are filmed. When they pull out the video camera, you know that it's the end. And then these people turn up as corpses along the side of the road, along with the DVD of the execution and a note stating that this is the fate all spies can expect.

SPIEGEL: And why are you telling us about it, if it's that dangerous?

Hassan: Because I feel the need to talk. Sometimes I have the feeling that I'm going crazy. There is more support for the drone attacks in the tribal regions than people out there in the world think. But no one dares to speak up. Everyone is afraid. Anyone who says anything good about the drones is finished. No one knows who is on which side. And human rights organizations have recently been increasingly spreading the notion that the drone war is happening against our will. Perhaps it's true that a majority oppose the drone war. But the mood certainly isn't that clear-cut. We want to live in peace, and that's only possible without these backward extremists. 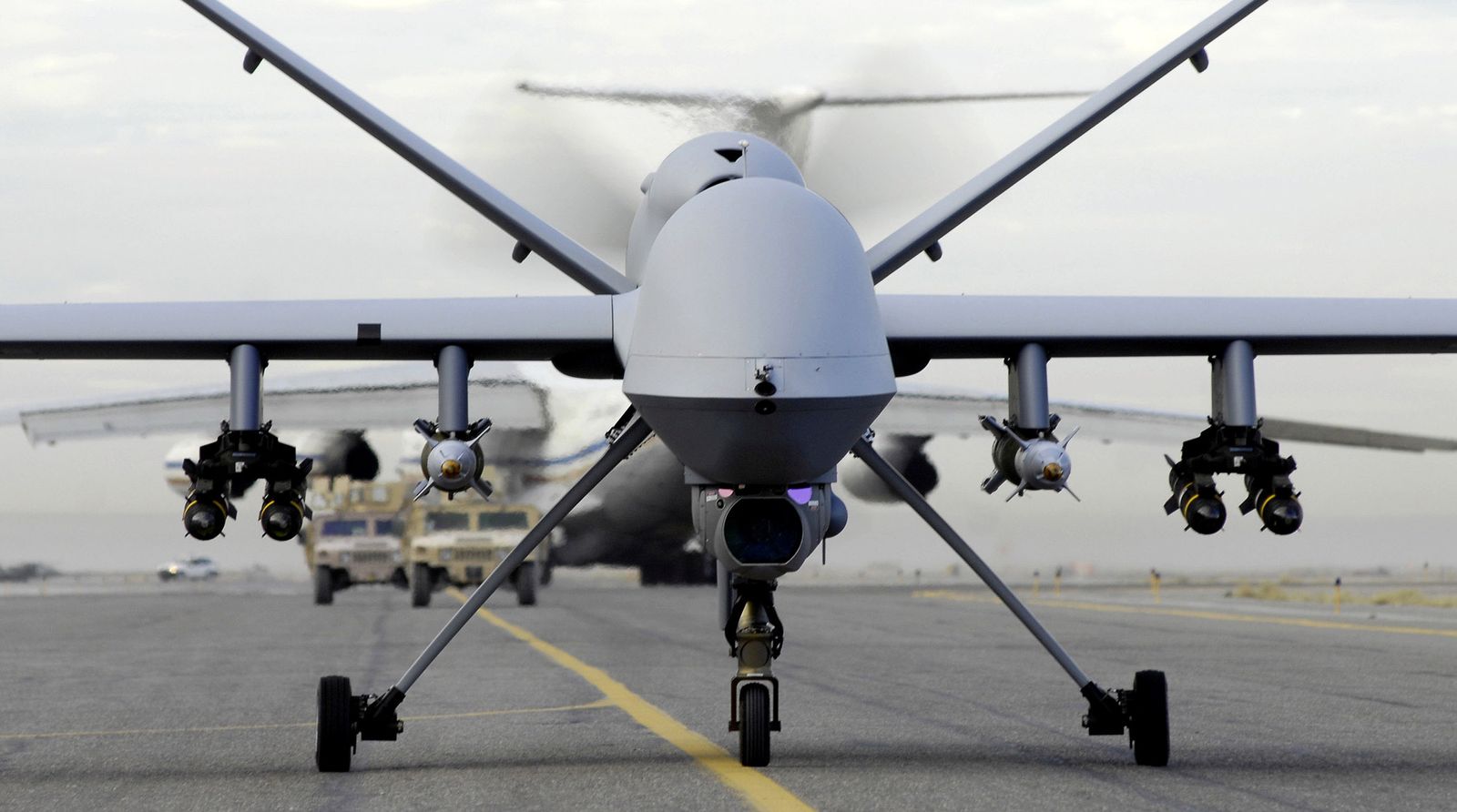 The MQ-9A Reaper, one of the models of armed drones used by the United States Air Force. Despite heavy public condemnation out of his native Pakistan, a CIA informant speaking to SPIEGEL on the condition of anonymity said he thought the US drone missions are "the right thing to do." He continued: "No weapon is more effective in fighting extremists ... From a military standpoint, it's a success for the United States. And I contribute to that success."