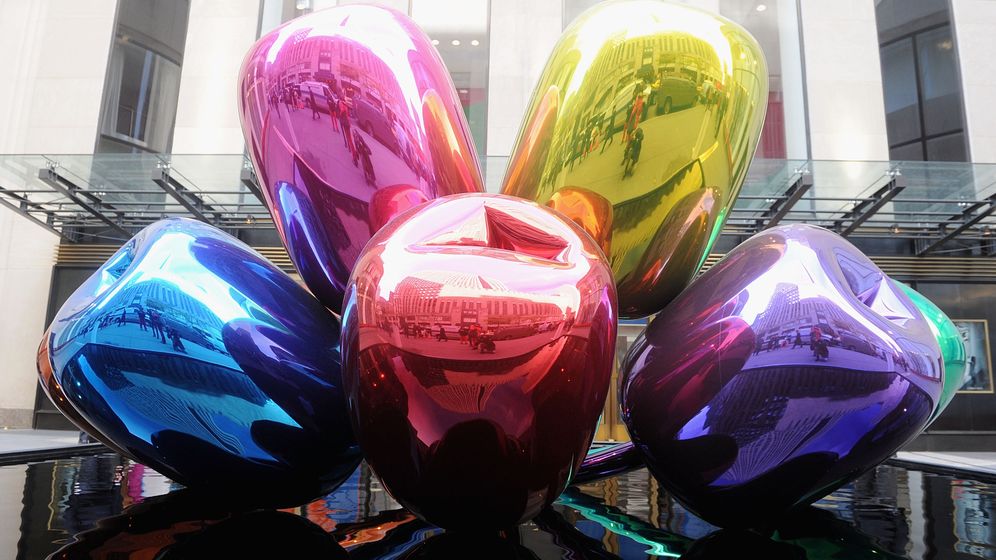 Many famous people came to the opening party of Austrian art dealer Thaddaeus Ropac's new location, including the gallery's most famous artists, like the British duo Gilbert and George, and German artists Georg Baselitz and Anselm Kiefer. And then there was the Paris high society set, including members of the Hermès and Rothschild families, and Bianca Jagger, a close friend of Ropac's.

His new, 5,000-square-meter (53,520-square-foot) gallery on the outskirts of Paris was inaugurated with significant German art, including works by the late Joseph Beuys and paintings by Anselm Kiefer. Ropac, 52, now has two galleries in Paris, the first one being in the downtown Paris ' Marais district. But he started out in Salzburg , where he still has a gallery. After the Paris opening Ropac traveled to the Abu Dhabi Art Fair, and then on to auctions in New York, where he reviewed the inventory for his collector customers ahead of record-high sales. He spoke with SPIEGEL about the feverish state of the art business.

SPIEGEL: Mr. Ropac, unimaginable amounts of money are now being spent on art. You've just traveled all over the world. Where have you found the most excitement?

Ropac: When it comes to enthusiasm for art, Paris is at the front of the line. The French are an appreciative audience. When it comes to pure business, and to making money with art, America remains on top. But whether an artist is valued highly on the market still says little about his importance. You can't take the market too seriously.

SPIEGEL: You, of all people, are saying that?

Ropac: Yes. There are these rankings of the supposedly most important artists, and they too say nothing. One can only treat them with amusement. The market is the more extreme form of a ranking. But the records are deceptive, because they only reveal something about fashions and trends. Many outcomes are hard to comprehend.

SPIEGEL: What about $34 million (€44 million) for a painting by Gerhard Richter, or $33.7 million for a sculpture by Jeff Koons?

Ropac: Don't get me wrong. Jeff Koons is a very good artist who is making an unbelievable contribution to American art. Still, it's hard to comprehend that the market values him so much higher than a comparable artist of the same generation and with the same amount of influence.

Ropac: It can't possibly be. And what is the definition of justified in this context?

SPIEGEL: Almost everywhere in the world, people are worried about the future of the economy and the possibility of a super-recession. But money is pouring into the art business as though there is too much cash in the world. Explain this phenomenon to us.

Ropac: There is something unreal about it. I have been selling art for 30 years. When I got into the business, Europe was the so-called tastemaker and America was the driving force on the market. That was the map. It was as if Asia, the Arab world, Russia and South America didn't exist. That has changed, and most recently it's been changing at an incredible pace. The world's third-largest auction house is now based in China, and in a few years it could very well be the largest. Besides, an increasing number of new museums that must be filled are being built. There is hardly a collector who isn't building his own museum. This is a development of the last 10 years.

SPIEGEL: Is there also a lot of money in the market from people in America and Europe who, as a result of the crisis, want to quickly invest in what is currently the most tempting asset?

Ropac: That too. It was most likely the case at the auctions in New York.

SPIEGEL: Does this buying have something to do with panic?

Ropac: Possibly. We serve customers for whom collecting is still the result of a passion for art. But it's hard to evaluate the motivation in all those who are just getting in now. There's a lot of new money that we're not familiar with.

SPIEGEL: When you opened your new gallery in the Pantin district of Paris in October, some collectors were disappointed because not all of the Anselm Kiefer paintings were available anymore on the day of the opening.

Ropac: It's true that some things were sold very quickly, though we had also prepared for that. But we're not really in any hurry. We're known for taking our time and thinking very carefully about whom we sell to.

SPIEGEL: You don't sell to everyone?

Ropac: It isn't as if someone can march in here, say he wants to buy something and then gets it. We made a few people very angry, because they thought they could come in with a suitcase full of money, and that would be enough for us. That's the difference between us and the auction houses, which sell to anyone who raises their hand. We would run the risk that certain art would simply disappear. I wouldn't be where I am today if I weren't consistent. Sometimes we might have been too strict, even unfair to potential customers. But we don't just sell. We place art.

Ropac: We ensure that many works of art go to museums. Eva Beuys, the widow of Joseph Beuys, also entrusted us with works, because she knows that we pay very close attention to the people we deal with. What she sold us won't get lost in the art market. We want to see the big Beuys installation we are exhibiting end up in a museum.

SPIEGEL: Many government-run museums no longer have budgets for buying art.

Ropac: Yes, we do have to ease up on the price and, if possible, bring along the sponsors and patrons, who come up with the rest of the money. But it's worth it to us. For example, we basically don't sell to art funds, and not to any old investors. That can be checked, because very little of what we sell turns up at auctions. Artists don't like it when their works become objects of speculation, and when the pictures end up on the secondary market after a year.

SPIEGEL: Your top artist, Anselm Kiefer, also works with New York dealer Larry Gagosian, who is feared among gallery owners as a shark. He practices a more offensive selling approach.

Ropac: Gagosian has done a lot for Kiefer on the American market. We have a different approach.

SPIEGEL: You're crossing paths with Gagosian more frequently. He too opened a second Paris gallery, at the same time you opened yours. He also offered new works by Kiefer at his opening. The art world sees this as Gagosian's challenge to you, and as proof of how crazy and brutal the business has become.

Ropac: When we announced a year ago that we intended to build a new gallery and open it with works by Kiefer and Beuys, Gagosian hadn't even found a space yet. What happened there was delicate.

SPIEGEL: You have both opened galleries in outer districts of Paris. Gagosian's gallery is on the grounds of a private airport, making it easier for collectors with private jets to get there.

Ropac: The choice of the location is a statement. Our gallery is within the Metro system, which was important to me. I want to see visitors in my gallery every day, not just a few collectors, but everyone. I want to integrate the gallery into cultural life.

SPIEGEL: Art has become dramatically more expensive. Is it also more valuable than ever before?

Ropac: It's more accessible. When I got into the business 30 years ago, the art world was completely elitist. Beuys was known and controversial, because he wanted to blow up the academy in Düsseldorf, at least symbolically. Aside from that, though, artists weren't known outside a small circle of people. Today they are people who are in the midst of things and have a voice. There is, of course, a negative side effect, a false glamour that's associated with this.

SPIEGEL: The glamour doesn't hurt gallery owners. Business is booming and the numbers are getting bigger and bigger.

Ropac: In fact, the only categories now are small and very large. What's missing is a strong middle. I would have felt good in that middle. But it's not working anymore. Artists want someone to realize their visions, or else you lose them. And I'm too ambitious for that. We have to continue to grow -- more so than we want to.

SPIEGEL: That sounds as if your success were a curse.

Ropac: No, we are also buoyed by a sense of euphoria. Suddenly a lot of things are possible. That's why I built on this scale. Before we could bring the four-ton sculptures of a sculptor like Antony Gormley into the building or hang more than three of Kiefer's works, something had to change. That's what I did.

SPIEGEL: Will there be another Ropac gallery?

Ropac: Yes, but not in Europe. Lots of things are happening, in many parts of the world.

Ropac: The museum curators, for example. Nevertheless, perhaps the market does have a tendency to exaggerate. We aren't seeing this for the first time. In 2008, the financial crisis led to a plunge in sales on the art market. Although it was quickly corrected, too quickly, in fact, it did happen, and it lasted for six to eight months. Suddenly everything stopped moving, which I felt was very pleasant. It resulted in a purging process, with a few artists falling by the wayside, those who had too much presence, even though their quality was disputed.

Ropac: I'd rather not say. But the shock was necessary.

SPIEGEL: Now the market is hotter than ever before.

Ropac: When a market runs hot, it also pushes up moderate and poor quality. And the market is running hot at the moment. But it's also abstract and absurd to see a painting by Gerhard Richter fetching so many millions. But this level of things is banal. Money is banal. The museums are unimpressed, and sometimes they're downright disgusted by what happens on the market.

SPIEGEL: Art institutions have to cut corners worldwide. And galleries are increasingly sharing in the costs of exhibitions.

Ropac: More is now expected of gallery owners. This also applies to the Grand Palais in Paris, which had a large show of Kiefer's works some time ago, as well as to the Deichtorhallen art center in Hamburg, which staged an exhibition of the works of our artist Antony Gormley this year. I received a call and was told: "We don't have the money and the sponsor pulled out. So will you participate? You have 24 hours to make a decision, because we have to start production tomorrow." I spent an evening thinking about it, and I spoke to the artist, and then I paid a large share of the costs, hundreds of thousands. Something of that magnitude would have been inconceivable a few years ago.

SPIEGEL: Gallery owners are the people with power, the ones who make decision about art and about their museum presentation.

Ropac: No, many museums are really still the corrective force, but they have to make do with little money, while at the same time spending more. The amount of money that insurance and shipping art consumes is enormous. In America, art patrons are used to being able to shape content, but luckily that isn't the case in Europe.

SPIEGEL: What would Beuys, the market's great outsider, say about this development, this dominance of money over art? He died in 1986, before the market went completely wild for the first time.

Ropac: It was a different time. Beuys was an outsized artist. He was successful in his way, but that wasn't necessarily reflected financially.