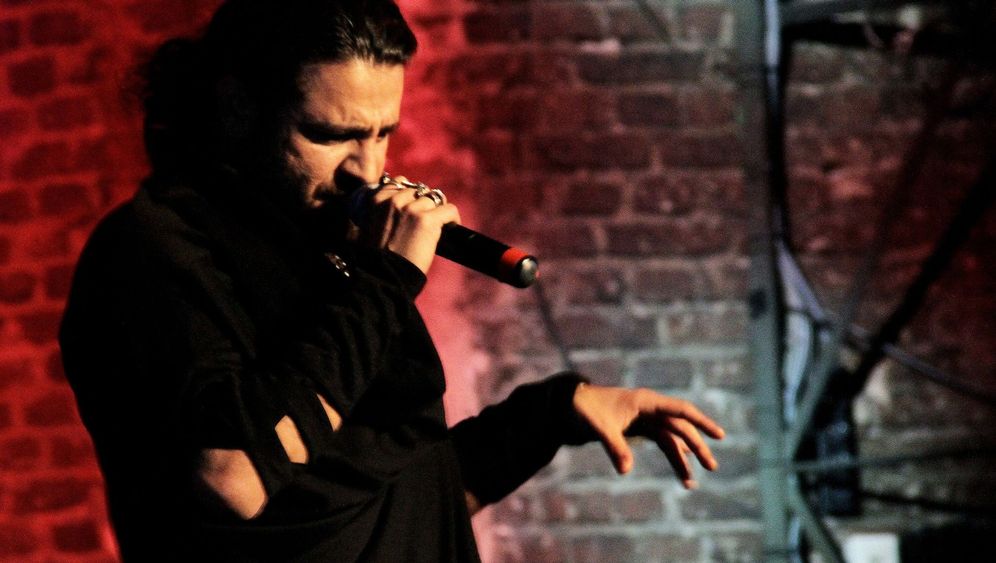 Photo Gallery: A Price on His Head

So this is what exile in exile looks like. Fleeing the threats of Iranian ayatollahs, Iranian rapper Shahin Najafi, 31, has taken refuge in a garden house near Cologne, surrounded by chirping birds and a fig tree. Although he's under police protection, the four fatwas that have by now been launched against him by leading religious clerics in Iran over the past few weeks seem incredibly far away. Najafi released a song in which he implored the 10th imam, Ali al-Hadi al-Naqi, to return to the Earth to sort out modern-day Iran's problems. Shiites venerate al-Naqi, who died 1,143 years ago and was a direct descendant of the Prophet Mohammed. The song has been downloaded over 500,000 times in Iran alone, and has received over half a million views on YouTube.

The musician appeared to be in a good spirits. The interview was conducted in German, although Najafi often switched to Persian and his manager, a German-Iranian, translated for him whenever necessary. German author Günter Wallraff, who is supporting Najafi, was also there. Children's voices could be heard in the distance.

Najafi: I read, I write, I have my guitar with me. I'm trying not to think about the threat.

SPIEGEL: Does anyone visit you?

Najafi: No, nobody. Only my manager and Mr. Wallraff.

SPIEGEL: You are married here in Germany. How is your family dealing with the situation?

Najafi: It's difficult; I'd rather not say anything more about it.

SPIEGEL: Are you in contact with your family in Iran?

Najafi: I'm in contact with a few friends. They haven't had any problems so far. My mother knows what has happened. She's very old.

SPIEGEL: What does your father do?

Najafi: My father died when I was five years old. He worked for the police.

SPIEGEL: Where did you grow up?

Najafi: In Bandar-e Anzali, a small town in northern Iran. I had a musical instruments shop there, from 2000 to late 2004, when I had to leave the country.

SPIEGEL: How did you get into music?

Najafi: I trained to become a professional Koran singer, from the age of 14 until I was 18. This involved learning Arabic harmony, breathing techniques, all of the things that this entails. And, of course, it involved studying the Koran.

SPIEGEL: What fascinated you about it?

Najafi: I was a very devout boy and one day I heard the music of an Egyptian Koran singer in the mosque. The melancholy of this music touched me so deeply that it brought me to tears. So I asked a boy there what kind of music this was, and he told me. Funnily enough, I ran into him again not too long ago; he lives in southern Germany, plays guitar and listens to Pink Floyd. I find it very moving that one of the people who kindled my interest in Koran singing has ended up taking a path that is similar to my own.

SPIEGEL: Then you studied at university.

Najafi: Yes, sociology. But I didn't complete my course of studies -- primarily because it was Islamic sociology. I couldn't relate to the dogmas. It wasn't a science, as it is in the West. I was kicked out of the university. Then I had to join the military. That's where I lost my faith.

Najafi: Until then, I was a young idealist. I lived in the world of poetry and ideas. I thought life was all about art and philosophy. In the military, I suddenly found out about the real world.

Najafi: Absolutely. Virtually all of my fellow soldiers came from the lower classes. For the first time, I was confronted with the reality of people who have to eke out an existence, who have nothing and have to struggle from day to day to survive. The stories of these men were shocking. Some were forced to deal drugs, while others had to sell their own wives.

SPIEGEL: When was that?

Najafi: In 1999. Military service lasted 21 months. My family thought if I spent time in the military, I'd become more reasonable, a bit calmer. But I've always been extreme in what I do -- both as a believer and a nonbeliever. When I returned from the military, I had above all realized how much injustice there was in Iran -- and that freedom of speech was not the most important thing for the poor as long as there was no social justice.

SPIEGEL: Why did you have to leave Iran?

Najafi: After the military, I played in bands that did cover versions of Western pop songs. At first, we only played instrumentals because they didn't get us into trouble with the authorities. Then I was in a band that played songs by the Gypsy Kings, which weren't banned, so a Gypsy Kings cover band was allowed. But starting in 2003, I wrote and played my own songs, and quickly had the intelligence service on my back. In November 2004, I played my last concert and fled via Turkey to Germany because I had been sentenced to three years in prison and 100 lashes due to one of my songs.

Najafi: I had already taken an early interest in German literature and philosophy. In other words, there was a cultural affinity for Germany. What's more, many Iranian exiles live in Germany.

SPIEGEL: It's not easy as an artist to live in exile. Your old audience is gone, and you don't know the new listeners.

Najafi: I dabbled around a lot and finally ended up with rap music. I actually don't like hip hop much; the music is too clichéd, the subculture, especially the macho strutting of gangsta rappers, isn't my thing. But, at the same time, rap is a simple, direct and strong musical language.

SPIEGEL: It actually shouldn't come as much of a surprise to you that your song "Naqi" sparked this reaction: After all, you invoke an imam who means a great deal to the Shiites, you rap about patched-up hymens, about corruption and sex. The cover shows a mosque's dome shaped like a women's breast, on top of which the rainbow flag is flying. You can't be much more provocative than that in one go.

Najafi: It was clear to me that my songs would provoke the regime. The cover is, among other things, an allusion to temporary marriages in Iran, which are concluded by the mullahs, sometimes for just a few hours, and are a source of income for them. And the flag over the mosque dome symbolizes the death penalties that are handed down to homosexuals in the name of religion. I nevertheless wouldn't have expected such an extreme reaction.

SPIEGEL: There's something satirical about the lyrics of your songs.

Najafi: Yes, I'm a satirist. The powerful don't like satirists.

SPIEGEL: Salman Rushdie could also be called a satirist.

Najafi: Fundamentalists can't take a joke. Ever. They want us to blindly obey, parrot everything they do, and believe in their dogmas.

'The Grand Ayatollahs Are Also Being Used'

SPIEGEL: In "Naqi" you paint a picture of Iran as a totally degenerate society.

Najafi: And that's how it is. One example: Due to the veil, the few things that remain visible in a women's face are very important. The eyebrows, for instance. As a result, even young girls have their eyebrows tattooed. In this country, public and private spheres are totally separated. Nothing is allowed in public, while everything is permitted behind closed doors.

SPIEGEL: Where do people hear your music?

Najafi: In secret, of course.

SPIEGEL: So how do you distribute your music in Iran?

Najafi: When a new album is released, you can purchase it everywhere on the Internet, except in Iran. That's why we offer it to people there as a free download via a website. People listen to the songs on their mobile phones.

SPIEGEL: The grand ayatollahs are very old; the Iranian population is rather young. Is the conflict with you also a generational conflict?

Najafi: At first glance, it looks that way. I believe, though, that the grand ayatollahs are also being used. These are old men who have forgotten how to live and are out of touch with the aspirations, interests and dreams of young people in Iran. I bet they've never heard my songs. They only know their classrooms, the schools in which they teach. I know what I'm talking about: I was there myself. When I was young, I listened to their speeches. The Grand Ayatollah Naser Makarem Shirazi ...

SPIEGEL: ... who issued the fatwa in which your name is mentioned for the first time ...

Najafi: ... is someone who I enthusiastically listened to when I was still a teenager.

SPIEGEL: Who, in your opinion, is using the grand ayatollahs?

Najafi: Iran is hard to understand. Although it is ruled in an authoritarian manner, it's not a state in which everything is controlled from one center. There are many forces that work in parallel: the military, the intelligence service, the Revolutionary Guard, the clergy and the government. They all share a fear of the nation's youth. That's why they've built up an image of me as an enemy of the state. I'm an easy, remote target. The idea is to divert attention away from the fact that many intellectuals, human rights activists, authors and singers are in prison.

SPIEGEL: What do you believe in politically?

Najafi: I believe in freedom, I'm for a world without borders. But that's an ideal. On a practical level, I'm for a secular state where religion only plays a minor role. In Western categories, I'd probably be a social democratic pragmatist with anarchist tendencies. The most important element of democracy, I believe, is the protection of minorities.

SPIEGEL: Can a fatwa be revised?

Najafi: That's never happened before. The grand ayatollahs believe that they are in possession of the absolute truth and thus are infallible.

SPIEGEL: The Iranian Ayatollah Mahmoud Amjad, who has been living in exile for some time now, has criticized the fatwa against you. Do you have allies beyond your fans?

Najafi: There are tens of thousands of them who are speaking out over the Internet and encouraging me not to give up.

SPIEGEL: Aren't you horrified by the thought that you may have to spend a long time in hiding?

Najafi: Yes, of course. I'm a musician; I have to perform. I can't give up. I have to be even more courageous. We know that we have a lot of enemies. Not only in Iran. But that doesn't matter. The future belongs to us. I think that art is a force that can change the world.

SPIEGEL: Those are lofty words.

Najafi: Last night I saw a video on the Internet. Two masked men are threatening me, in Persian with an Afghan accent. They ask: Why do you insult our faith? We will find you, no matter where you hide; you're not safe anywhere. And they also speak German. Perhaps they live in Germany or grew up here. What should I do? Give in? Show regret? I won't do that. I believe in history. We need time. It will take time before something changes. But it will happen.

SPIEGEL: Mr. Najafi, thank you for this interview.