Everyone loves Knut. The three-month-old polar bear born in one of Berlin's zoos has become a star in the German capital and has won hearts the world over. Indeed, the exact date of his first public appearance -- likely to be made later this week -- is the subject of almost as much anticipation as the details of Britney Spears Alcoholics Anonymous love affair. It's impossible not to love the little guy, right?

Well, not quite. Animal rights activists, as SPIEGEL reported Monday, aren't so enthralled with the polar bear baby. They are concerned that Knut, who is being raised by human hand after his mother rejected him, is in danger of losing touch with the bear necessities. Some would like to see him dead.

"Raising him by hand is not appropriate to the species but rather a blatant violation of animal welfare laws," animal rights activist Frank Albrecht told the mass circulation newspaper Bild, whose front page headline Monday read "Will Sweet Knut Be Killed by Injection?"

Berlin Zoo is allowing Knut to be raised in such a way that the bear will have a behavioral disorder for the rest of his life, Albrecht believes. "In actual fact, the zoo needs to kill the bear cub," he adds.

He's not alone. Wolfram Graf-Rudolf, director of the Aachen Zoo, told the newspaper, "I don't consider it appropriate for the species that the little polar bear is being raised on a bottle." The animal will be fixated on his keeper and not be a "real" polar bear, he says. However he feels it is now too late to put Knut out of his supposed misery. "The mistake has been made. One should have had the courage to put him to sleep much earlier." 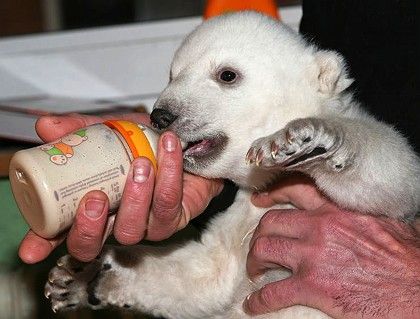 Some are concerned that Knut has had too much human contact in his young life.

The idea isn't as outlandish as it may at first seem. Although giving Knut a death sentence would likely bring his many fans out on to the streets, baby zoo animals have been killed for the same reason in the past. Two-day-old baby sloth Hugo was put down by lethal injection in Leipzig Zoo at the end of last year, sparking emotional protests.

When it comes to Knut, it is likely that clearer heads will prevail. Wolfgang Apel, head of the German Animal Protection League, called for Knut to be saved. "Making bears into humans has to stop as soon as possible, but we cannot put him to sleep. He has a right to live."

Others believe that Knut will always be a bear, no matter what. "You can't domesticate a wild animal," Rüdiger Schmiedel, director of the German Bear Foundation told SPIEGEL. "When Knut reaches puberty, his keeper is going to get a whack upside the head." The polar predators are certainly dangerous when fully grown. A Dutch man had his skull bashed in by a polar bear on the Norwegian island of Spitzbergen, and two polar bears in Bremerhaven Zoo badly injured a keeper last September while playing.

"As a polar bear, he is programmed to be a solitary animal," says bear expert Udo Ganslosser. "So he won't suffer when his parental figure isn't able to visit him any more."

However Knut will find his solitary nature put to the test in the coming days when he makes his first, hotly anticipated public appearance. The zoo had previously said Knut would go on show when he reached 8 kilograms in weight. That target has now been reached -- little Knut tipped the scales at 8.6 kilos last Friday.

Heiner Klös from the zoo management told the news agency dpa Friday that Knut would make his debut appearance "within the next 10 days." The exact date would depend on the weather, he added. Pundits expect the appearance to be in the second half of the week, once Berlin recovers from a current cold spell. Klos said they are expecting a crowd of photographers and cameramen to document Knut's coming out party.

And one famous photographer has already been to see the little bear. Star photographer Annie Leibovitz visited Knut on Saturday to take pictures of him for a campaign to protect the climate. Knut-keeper Thomas Dörflein told the newspaper Welt am Sonntag he had to pose "like Leonardo DiCaprio," who Leibovitz had earlier photographed on Iceland.

Dörflein has raised Knut, who is the first polar bear to be born in Berlin Zoo in over 30 years, on a bottle since the bear cub was rejected by his mother Tosca at birth. The zoo reports that little Knut is starting to become a bit of a handful as he gets bigger -- suggesting that the bear is maybe not as human as people fear. "The many bruises that his keeper has show that Knut has discovered he is a bear," Klös told dpa.

With reporting by Frank Thadeusz