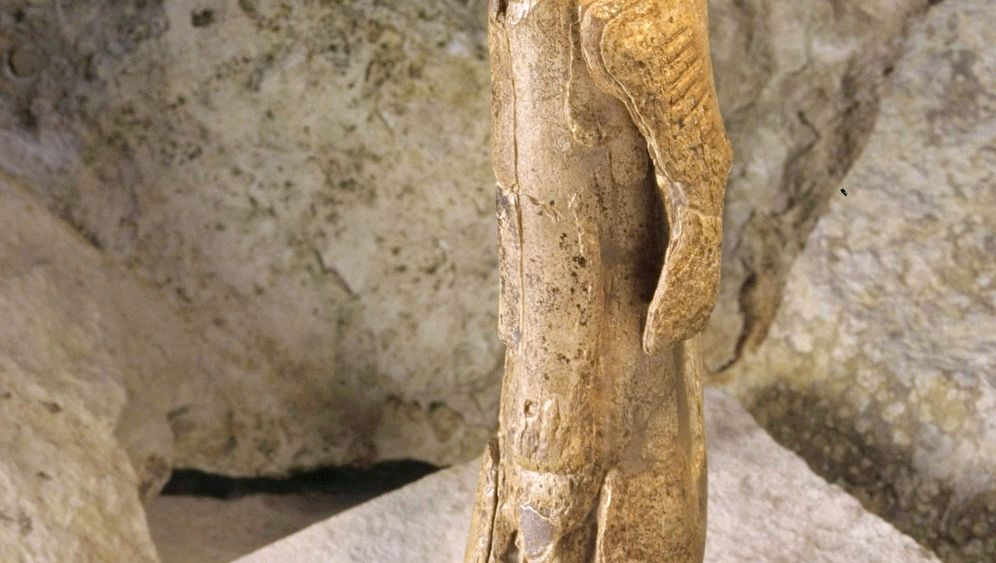 Photo Gallery: The Mysteries of the Lion Man

Using a hand hoe and working in dim light, geologist Otto Völzing burrowed into the earth deep inside the Stadel cave in the Schwäbische Alb mountains of southwestern Germany. His finds were interesting to be sure, but nothing world-shaking: flints and the remnants of food eaten by prehistoric human beings.

Suddenly he struck a hard object -- and splintered a small statuette.

It was 1939 and Völzing didn't have much time. He had just been called up to serve in the military and World War II was about to begin. He quickly packed the pieces into a box and the excavation, which was being financed by the SS, was terminated on the same day.

For the next 30 years, little heed was paid to the pieces. But then, they were reassembled to create one of the most impressive sculptures of the Paleolithic Age.

Called the Lion Man, it is fashioned from the tusk of a mammoth and stands about 30 centimeters (12 inches) tall. Its creator polished it with saliva and leather -- and an experiment showed that it likely took the sculptor about 320 hours to carve the figure.

Copies of the famous ice age treasure are now on display in New York and Tokyo. The original, however, is heavily damaged -- and no one knows exactly what it looks like. Many fragments were overlooked in the cave when the prewar dig was so abruptly terminated. The figure achieved its current form in 1988. It consists of 220 parts, but about 30 percent of the body is still missing. Large segments of the surface have broken off.

The poor condition of the figurine has only made it more mysterious. Is it meant to represent a mythical creature, or a shaman hiding under an animal hide? Are the six stripes on the left upper arm meant to depict scarification marks or something else? And what was on the right arm, which is missing?

The genitalia are also unrecognizable. German archeologist and Upper Paleolithic expert Joachim Hahn has interpreted the small plate on the abdomen as a "penis in a hanging position." Elisabeth Schmid, a paleontologist, classified it as a pubic triangle.

It was the beginning of a bitter dispute over the gender of the small idol that erupted in the 1980s and continues to this day. The statue has been made into an "icon of the women's movement," says Kurt Wehrberger of the Ulm Museum, the owner of the precious object.

Those who believe that the Lion Man is in fact a woman are convinced that primitive societies were matriarchal. They contend that women of the period, instead of standing obediently by the cooking fire and watching over the children, hunted mammoths and set the tone when it came to rituals and the priesthood. But is this true?

The debate remains undecided today. But that could soon change, now that new fragments of the Lion Man have turned up.

The new discoveries came after archeologists once again turned their attention to the Stadel cave. They sifted through all of the rubble from 1939, explains excavator Claus-Joachim Kind -- and the results were sensational. "We found about 1,000 pieces, which presumably belong to the statue," Kind says.

Some of the fragments are tiny, only a few square millimeters in size, but the cache also includes pieces as long as a finger.

The figurine will be taken to the State Conservation Office in Esslingen, near Stuttgart, where it will be completely taken apart. The old glue joints will be dissolved and the filler made of beeswax and chalk, which was used as a placeholder, will be removed.

Then the statue will be reassembled piece by piece, a task that those involved await with great anticipation. "We will soon be able to view the most mysterious work of art from (the southwestern German state of) Baden-Württemberg in its original form," Kind hopes.

Already it is clear that the figurine will become a few centimeters taller due to new neck pieces that have been found. Furthermore, the gaping hole in the back can now be plugged, and the right arm has been found in its entirety. Additional decorations, including raised dots and strange-looking lines, have come to light.

These new revelations offer a greater insight into the mind of the prehistoric sculptor, who created the figure about 35,000 years ago. His ancestors had migrated to Europe, which had been controlled by the Neanderthals, shortly before.

The statue was found near traces of a fire site in a niche 27 meters (89 feet) from the mouth of the cave. When Kind was working at the site, he also found a decorated deer's tooth, the incisors of an arctic fox and ivory beads. The items could have been pieces from a decorative robe. Perhaps the niche served as a shaman's changing room.

It is considered likely that prehistoric sorcerers wore furs as costumes when they celebrated rituals around the campfire. Hybrid creatures -- half-man, half-beast -- also appear in cave drawings in France.

It would seem that the shamans' preferred costumes were the hides of the more dangerous representatives of Ice Age fauna. The cave lion weighed more than 250 kilograms (550 lbs.); one swipe of its giant paw would have been enough. A human being holding what looks like a musical instrument is depicted in a cave in the foothills of the Pyrenees. The figure is wearing the hide of a bison, an 800-kilogram colossus that was not to be trifled with. Perhaps hunters hoped to acquire the animal's strength and even take possession of its soul through masquerade and dance.

Studies about primitive peoples in Siberia suggest how these rites might have proceeded. Even into the modern age, their shamans wore antlers on their heads. There are similar accounts involving the Blackfeet Indians in North America. Their healers hopped around under bearskins to the sound of drums.

The Lion Man is standing on tiptoes. He, too, seems to be dancing.

But who is hidden underneath the robe? From time immemorial, the lion has been viewed as a symbol of the masculine virtues of courage and strength. Shamans still exist today in the Amazon region and Australia. Most are men.

On the other hand, the statuette has some perplexing features. The navel, a symbol of childbirth, is especially pronounced. A horizontal crease runs across the lower abdomen, a feature that is typically female.

Paleontologist Schmid believes that the figure once had breasts, which eventually broke off. According to Schmid, the transition from the thighs to the buttocks is also indicative of a female body. She made a model out of modeling clay, which is now in a safe in Ulm. It depicts the Lion Man with an ample bosom.

Many scholars dismissed the jarring replica as nonsense at the time. Nevertheless, there is at least one piece of evidence to support Schmid's theory. An image of a 14,000-year-old human body with an animal head discovered in the Las Caldas cave in Spain is obviously female. The head looks like that of an ibex, while the lower part of the body features female genitalia.

Does this mean that female shamans did exist? Were women in charge of the religion of our ancestors? The new finds could solve the mystery once and for all. Hundreds of tiny ivory fragments will have to be pieced together to create a statue that experts estimate will contain 20 percent more of its original material.

According to one of the excavators, there is also sufficient fragmentary material to reconstruct the genitalia. "We'll figure out the gender," he says.