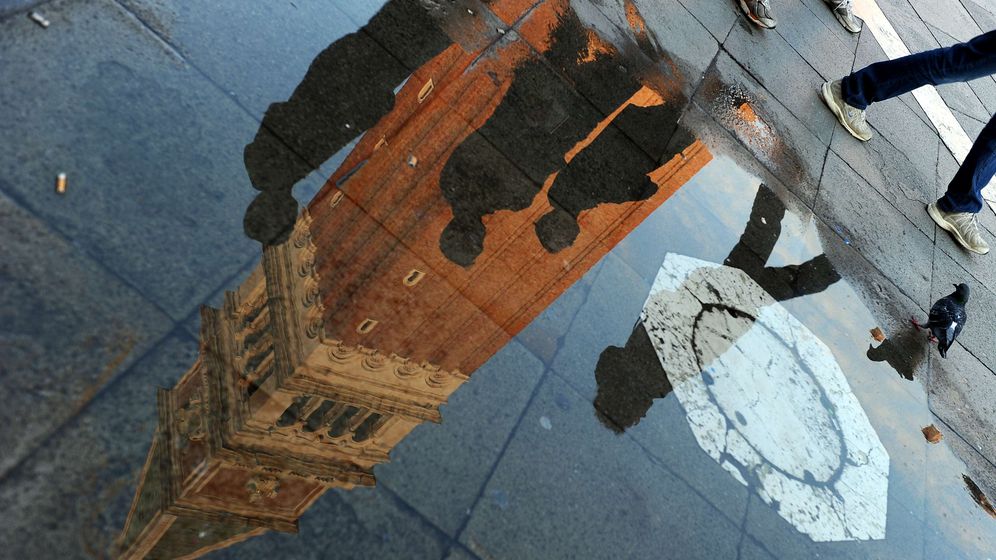 Marco Zambuto has an active imagination, a vital asset these days. He has no choice. He can envision, for example, the ancient columns from the Valley of Temples -- a millennia-old Hellenic legacy in Sicily -- on T-shirts. The site is a symbol of ancient Greece, the cradle of Europe. And these days, Zambuto hopes, it can offer both consolation and an incentive to spend in these times of economic crisis in Athens and Rome.

Zambuto is the mayor of the town of Agrigent in Sicily, and he says the archeological site there is worth €2 billion. He wants to do his part to market that potential. With local elections approaching in May, Zambuto, 39, is on the stump, and his idea of auctioning off the rights to the site, in hopes of attracting major investors from around the world, plays a central role in his campaign speeches. Only the best will be awarded the contract, he promises. The money generated by the auction, he says, will be invested in the urgently needed maintenance of the temples.

"Italy has the world's largest heritage of cultural treasures," says Zambuto, "but we do nothing to maintain it. It's the government's responsibility, of course, but if the government is broke -- well, then Versace can certainly be a solution." Or Louis Vuitton, for that matter. As long the investor isn't a Russian oligarch like Mikhail Prokhorov, Vladimir Putin's challenger in the presidential elections in March, who has reportedly expressed an interest in buying the Temple of Zeus -- although no one knows why he wants it. Now that, says Zambuto, would be going too far. Selling Italy's cultural heritage is out of the question, but renting sites for fashion shows or parties is certainly an option, he adds. "I can imagine all sorts of things," says Zambuto with a smile, "as long as the money keeps coming in."

Since Rome radically cut its cultural budget and leaned on regional governments to make significant cuts of their own, provinces and cities have been plugging the holes in their budgets by selling off government-owned properties, including monasteries, barracks and Etruscan villas, and turning over the usage rights to private investors. They call it cultural sponsoring, an area in which Italy has long lagged behind the rest of Europe.

Culture is Italy's natural resource, almost like oil for the Middle East. It is home to 44 UNESCO World Heritage sites, about 5,000 museums and 60,000 archeological sites, more than any other country in the world. But Italy's treasures are not being kept up. Under former Prime Minister Silvio Berlusconi, the government's cultural budget shrank by a third within three years. His finance minister defended the cuts by saying: "I don't know what all the fuss is about. After all, you can't eat culture."

Today only €1.4 billion ($1.86 billion) is devoted to culture -- less than 0.2 percent of the national budget. Author Umberto Eco calls it the "anorexia of culture." It has been the Italian reality for years, and now Prime Minister Mario Monti is seeking to limit the damage.

In Rome, Diego Della Valle, 58, was considered a pioneer of sponsoring, but now his private initiative threatens to fail in the face of bureaucracy and sovereignty in matters of cultural heritage preservation. Last year, Valle, the owner of the Tod's shoe company, prevailed over other interested parties, including low-cost carrier Ryanair and real estate companies, and received the exclusive rights for the visual use of the Coliseum in Rome. In return, he promised to spend €25 million on a complete renovation of the 2,000-year-old structure, including the construction of a visitors' center. Rome Mayor Giovanni Alemanno was thrilled.

But then the union representing cultural workers sued because it believes that the process is illegal. The renovation work was scheduled to begin in March, but nothing happened. And earlier this month, when Pope Benedict XVI held the traditional Good Friday Procession at the Coliseum, a spotlight was shone once again on the poor condition of the structure, with its crumbling mortar and blackened façade, the result of being surrounded by busy traffic arterials in the middle of Rome.

Venice has been something of a pioneer when it comes to cultural sponsoring. Companies in the luxury goods sector hope to use the city to polish their images, with fashion brand Diesel is reportedly paying for restoration of the Rialto Bridge. The Doge's Palace and the Bridge of Sighs are draped year-round with giant panels covered with advertisements for banks and fashion retailers, like Bulgari and Guess. The city is pleased that the French luxury goods maker and art collector François Pinault built his own museum and that Miuccia Prada is exhibiting her collection in her palace on the Canal Grande. Venice is €400 million in debt, and most of its subsidies from Rome are tied up in the MOSE dam project, which will cost at least €5 billion and is intended to protect the city from floods.

But the Venetians began protesting when the Benetton Group acquired a railroad building and saw its bid approved to transform the Fondaco dei Tedesci, the old trade mission for German merchants like the Fugger family, into a giant shopping center designed by the architect Rem Koolhaas. Now citizens' initiatives are criticizing the commercialization of the public cultural heritage and want to prevent the city from being turned into a commercialized version of its old self.

The sellout of culture and the simultaneous attempt to preserve the country's historic sites are the two poles of the discussion. The conflict is especially evident in the treatment of Pompeii and Herculaneum, the two ancient cities that were destroyed during an eruption of Mt. Vesuvius on August 24, 79 BC.

Since thefinancial collapse of the last two years, Pompeii has become the symbol of a decaying country, culturally bankrupt and crippled by political gladiators whose official limousines allegedly cost twice as much as the country's cultural budget. Three million tourists visit the sites each year, paying an entrance fee of €11 apiece, revenues that come in addition to the subsidies from Rome. But the constantly changing superintendents have wasted the money on elaborate shows or spent it on the €6 million concrete restoration of the Grand Theater.

A red carpet, now much worse for wear, that was rolled out for a visit by Berlusconi is still lying on the path to the villa of Marcus Lucretius, the most powerful moneylender in the city. A few years ago, Berlusconi declared a state of emergency in Pompeii, because the city was controlled by stray dogs and mafia-like gangs of tour guides, and only a fraction of the houses could still be visited. But he never showed up, not even when the famous gladiator school collapsed in late 2010, an incident President Giorgio Napolitano called a "disgrace for Italy."

But in Pompeii's sister city Herculaneum, the American David Woodley Packard, son of the founder of Hewlett-Packard, is ensuring that 30 conservators are working to preserve the ancient city, and there is now money available for research and new excavations. The Herculaneum Conservation Project, together with the British School at Rome, has already invested €15 million, and there are no advertising panels to be seen.

There are reportedly already 20,000 of these private initiatives in Italy, where citizens are establishing local heritage museums and paying for the preservation of historic sites. In Rome, a group of concerned citizens even occupied the Teatro Valle, which they are now running. They all benefit from the fact that the government is so weak.

Salvatore Settis was once once president of Italy's National Heritage Council until he resigned in protest against Berlusconi's policies. He too knows that patrons of culture will be indispensible from now on. The days when Italy refused out of national pride to allow a Japanese company to contribute €12 million to efforts to stabilize the Leaning Tower of Pisa are long gone, says Settis. "Today we're walking around with a hat and begging for handouts. Meanwhile, we are dealing with mayors who understand nothing about antiquity, instead treating it like classic cars or chic real estate in the best locations, to be sold off to the highest bidder."

Now that the country has to be saved from bankruptcy, culture has become irrelevant. At least the European Commission has decided to contribute €42 million toward the preservation of Pompeii. Yet another bailout fund.